The motivation for and the Challenges of Pricing Counterparty Risk

Valuation of counterparty risk refers to the practice of attaching a value to the risk of all outstanding positions with a given counterparty. For instance, let’s assume that a trader is planning to engage in an interest rate swap with a double-A counterparty whose outstanding debt is priced at a credit spread of 150 basis points per year. Assume that the notional value of the swap is $500 million.

In general, there are two key components needed to price counterparty risk:

Why is pricing Counterparty Risk Important?

When pricing counterparty risk, best practice calls for clear and well-organized responsibilities where the person or office tasked with the calculation process is specified.

Pricing counterparty risk (derivative contracts), however, is a difficult endeavor, particularly when compared to the pricing of bonds. With bonds, payments are made in only one direction once the investment has been made at the onset of the contract, and a default charge can easily be incorporated when discounting scheduled cashflows. With derivatives, contracts are bilateral, with payments often being made in both directions at specified times during the life of the contract. In addition, cash flows may be fixed, floating, or contingent.

The figure below helps to visualize the problem with derivatives. Looking at bonds, a given cashflow is fully at risk (there’s a chance all of it will be lost) in the event of a default. In the swap case, only a fraction of the cash flow will be at risk because there’s an opposing cashflow that offsets the outflow to some degree. Although the risk on the swap is clearly smaller due to this effect, it is hard to determine the fraction of the swap cashflows that are indeed at risk. The amount at risk will depend on many factors, including forward rates and volatilities. 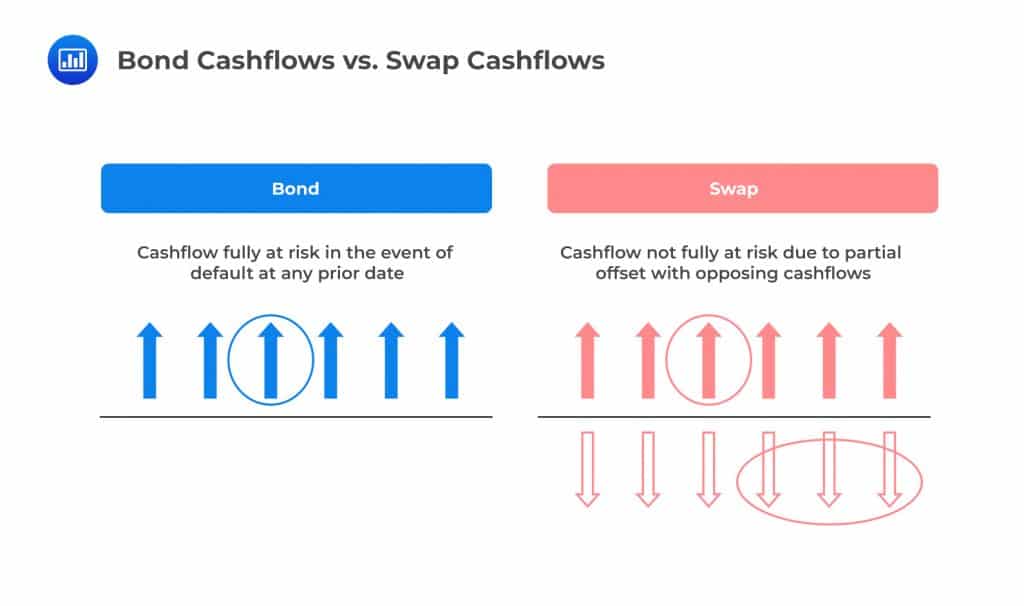 Credit valuation adjustment, CVA, is a change to the market value of derivative instruments to account for counterparty credit risk. It can also be interpreted as the expected value or price of counterparty risk.

Mathematically, CVA is the difference between the risk-free value and the true portfolio/position value that takes into account the possibility of a counterparty’s default.

The equation above implies that it is possible to separate responsibilities in an institution and have a desk responsible for risk-free valuation and another one to determine the risky (counterparty) component. A swap trader, for example, can take on the task of pricing the swap as if it were risk-free and then rely on someone else in the office to determine the counterparty risk charge.

CVA Formula (In the absence of Wrong-way Risk)

Ignoring wrong-way risk implies that we assume independence between default probability, exposure and recovery values. Under such assumptions, the CFA is calculated as follows: 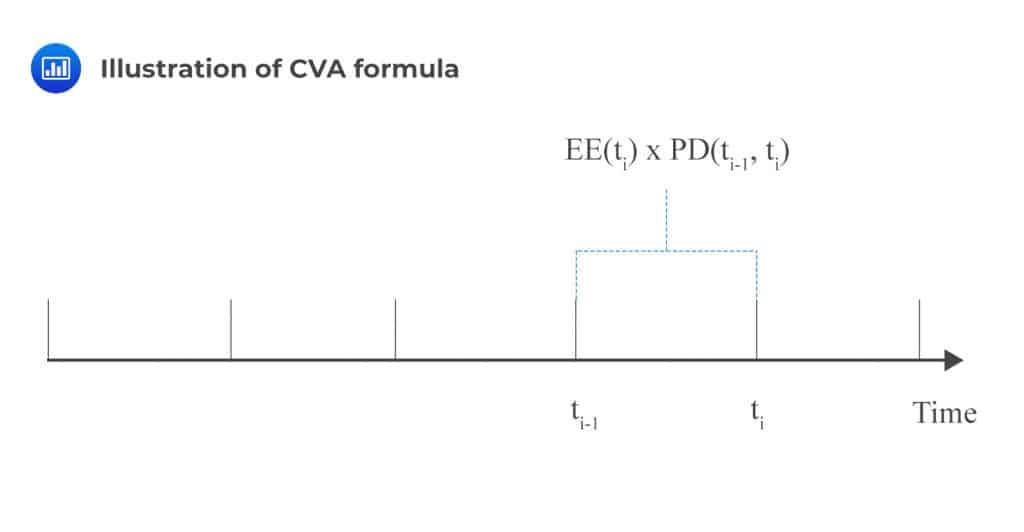 CVA as a Spread

Instead of calculating the CVA as a stand-alone value, we can also express it as a spread (annual charge). To do so, we divide the CVA by the unit premium of a risky annuity value for the maturity in question. This yields an annual spread expressed in basis points. The spread would effectively be a charge to the weaker counterparty. Assuming that the EE is constant over time and equal to its average value, EPE, CVA as a running spread is computed as follows:

The left hand side of the equation above represents CVA as a running spread.

It is important to emphasize the assumptions we have made so as to estimate CVA as a running spread:

Example: CVA as a running spread

An interest rate swap trading desk wishes to come up with a quick estimate of the CVA spread on a swap. As per the department tasked with calculating counterparty exposure, the EPE stands at 6%. A CDS with the counterparty as the reference entity attracts a premium of approximately 200 basis points per year. Determine the CVA as a running spread.

The CVA as a running spread is computed as follows:

Having determined the CVA as a spread, the trading desk can now estimate approximately the P&L impact of this by pricing the same swap but paying 12 bps more on the pay leg (or receiving 12 bps less on the receive leg). The other option would be to add/subtract a CVA charge of 12 basis points to one leg of the trade.

CVA is impacted by each of the following:

In default, the CVA falls to zero.

Shape of the Credit Spread Curve

An increase in the recovery rate increases the implied probability of default but reduces the CVA. A related point has much to do with recovery timing: Whereas CDSs are settled quickly following a default event either by way of a CDS auction cash settlement mechanism or the sale of the debt security in the market, bilateral OTC derivatives take time to settle. That’s because the underlying transactions such as netting (less collateral) are often quite difficult to define given a large number of trades.

This gives rise to two types of recovery: settled and actual recovery

As a risk mitigant, netting reduces CVA. A group of n transactions with the same counterparty under one netting agreement is called a netting set (NS). The CVA for a given netting set must be greater than or equal to the sum of stand-alone CVAs:

Thus, one must evaluate the change in CVA before a trade has been executed.

A new trade should be priced so that its profit at least offsets any increase in CVA.

The ability to calculate the incremental CVA helps the trading desk to attach a risk charge to every new trade brought in by a trader or sales person. That way, it is possible to come up with a compensation mechanism that is commensurate with the risk of the new trade

The Impact of Incorporating Collateralization into the CVA Calculation

Collateral reduces CVA (results in a less negative CVA value) but it only changes the counterparty’s expected exposure, EE, not its PD

As noted earlier, incremental CVA is the change (or increment) in CVA that a new trade will create, taking netting into account.

It is derived as follows:

The incremental EE is the change in EE at each point in time caused by the new trade, which impacts the original exposure.

The table below gives the incremental CVA calculations for a seven-year USD swap paying fixed with respect to four different existing transactions and compared to the stand-alone value. We assume that the credit curve is flat at 300 bps with a 60% LGD.

Marginal CVA enables the trading desk to break down netted trades into trade level contributions that sum to the total CVA. As an ex-post measure, it is determined after the portfolio CVA has been calculated and then allocated to trades

In other words, the marginal CVA is found by breaking down the CVA for any number of transactions into transaction-level contributions that sum to the total CVA. The breakdown is carried out based on certain criteria. 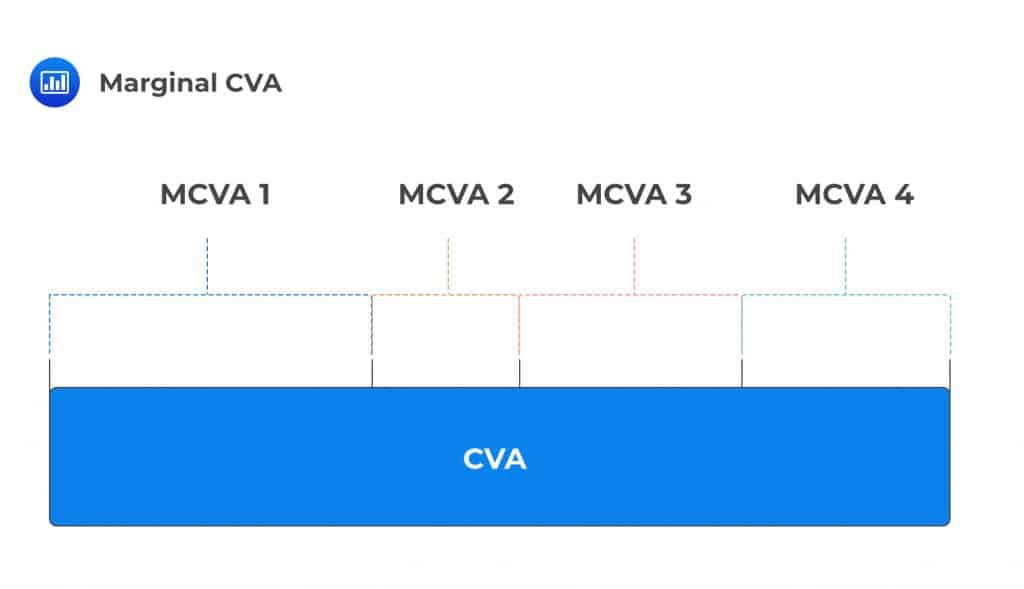 The marginal CVA helps the trading desk to single out transactions that have the greatest impact on a counterparty’s CVA. The incremental CVA and marginal CVA can be the same, depending on the allocation criteria.

Up to this point, we have assumed that the party calculating the CVA (party with positive exposure) has a zero chance of default. In a transaction involving a counterparty and a large multinational financial institution, for example, such an assumption would appear fairly innocuous. Indeed, it falls in line with the “going-concern” accounting principle, where every transaction that appears on the financial statements is initiated upon the assumption that the business will remain in existence (solvent) for an indefinite period. That means the financial institution is assumed to have zero counterparty risk from the perspective of the counterparty. However, the events of the 2007/09 financial crisis deconstructed and poked big holes in this assumption, seeing that several large institutions previously considered financially invincible and too big to fail went down.

As a result, international accountancy practices now recognize that all trades have bilateral counterparty risk. They allow large institutions to consider their own default in the valuation of their liabilities. Which brings us to debt value adjustment.

Bilateral CVA is CVA that incorporates an entity’s own credit risk into the derivative valuation process. It is built upon the recognition that the creditworthiness of both parties in a bilateral contract matters. In a transaction between a small counterparty and a larger financial institution, an informed counterparty (viewed as the “underdog”) would be expected to adjust for the institution’s credit risk when valuing the transaction.

BCVA as a Spread

We can rewrite BCVA in terms of the EPE and ENE as follows:

If we assume that ENE is the opposite of EPE, then

Example: BCVA as a running spread

From the perspective of the trading desk,

Compared with the previous example, we can see that the BCVA is reduced from the (unilateral) CVA calculation of 12 bps

Fenton Associates is a trading firm from Norway that needs to have a very quick idea on a swap’s bilateral credit value adjustment (\(BCVA\)). The firm knows that the expected positive exposure (\(EPE\)) for a trade of this type is 10.5% with an expected negative exposure (\(ENE\)) of -8.2%. The counterparty credit spread is found out to be around 150 bps and the credit spread of the trader’s own institution is 121 basis points per year. What is the \(BCVA\)?

Recall that \(BCVA\), which is an obvious extension of \(CVA\) and \(DVA\), is calculated by using the following formula:

From the question we have that:

Understanding the Securitization of Su ...

After completing this reading, you should be able to: Explain the subprime mortgage... Read More

After completing this reading you should be able to: Explain the purpose of... Read More

After completing this reading, you should be able to:       Explain the motivation... Read More

After completing this reading you should be able to: Describe and calculate the... Read More