Assume two parties, A and B. Party A, agree to pay Party B a fixed interest rate at 4% per annum, compounded semiannually, on a principal of USD 100,000. Party B, in return, agrees to pay party A interest at the six-month LIBOR (London Inter-Bank Offered Rate). Exchanges occur every six months over a period of three years. The tables below summarize the possible scenarios of parties A and B.

Scenarios for party B: Pays LIBOR and receives a fixed rate.

Suppose that the exchanges in the above example take place on 1st January and 1st July. The first cash flow exchange is on 1st July of that year, and the floating rate exchanged will be:

Note: 183 was obtained by adding the total number of days between 1st January and 1st July, and the day count convention for LIBOR is actual/360.

Similarly, the fixed rate will be expressed with day count conventions as shown below:

The details of each swap agreement are contained in a document called the confirmation. Such documents are drafted by the International Swaps and Derivatives Association (ISDA). Each party must append their signature on the confirmation to show their commitment to the agreement.

Swaps Based on Overnight Rates

When using an overnight rate (which will replace swaps as discussed in the chapter on Properties of Interest Rates), the floating rate can be obtained using the formula:

R is the floating rate,

d is the number of days, and

r is the overnight rate.

Interest rate swaps can be used to transform assets into liabilities, or vice-versa, by converting fixed (floating) rates loans and liabilities into floating (fixed) rates.

Assume that the 3-year bid and ask quotes are 3.06% and 3.09%, respectively. A company borrows a bank USD 5,000 at a fixed interest rate of 4%, compounded quarterly. To convert this fixed-rate loan into a floating rate liability, the company can use the three-year bid and ask quotes to enter into a three-year swap with another company. It will then have three sets of cash flows:

The net out interest payment will therefore be:

Suppose the above company borrowed the USD 5,000 on a floating interest rate of three months LIBOR plus 0.5% (50 basis points). To convert the floating rate to a fixed rate, the company can use the ask quote of 3.09%. It will then have the below set of cash flows:

The net out interest payment will therefore be:

The Role of Financial Intermediaries in Swap Markets

Just like in other OTC instruments, parties to a swap do not interact one on one. A swap dealer intertwines themselves between the parties taking a commission on the trade. 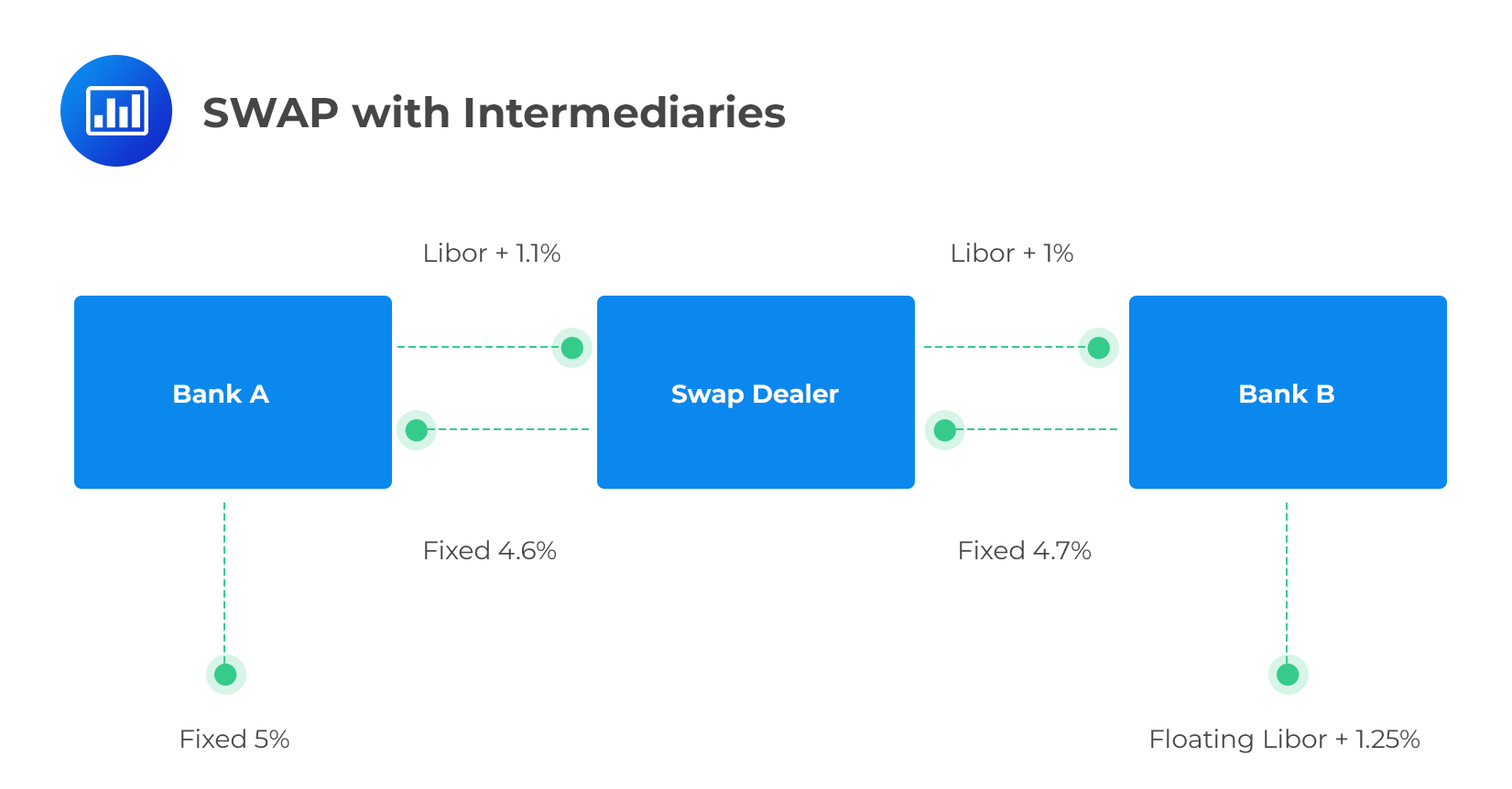 In most cases, therefore, a swap party stays unaware of the identity of the party in the offsetting position. The swap dealer effectively serves as an intermediary.

A problem with the comparative advantage argument is that it assumes the floating rates will remain in force in the long term. In practice, the floating rate is reviewed at 6-month intervals and may increase or decrease to reflect the borrower’s credit risk. It also assumes zero transaction costs even when an intermediary is involved in the swap (which is standard practice).

In essence, a swap is a series of cash flows, and therefore its value is determined by discounting all those cash flows to the present (valuation date). The cash flows are discounted using spot rates developed using the swap curve. The curve makes use of the following relationship between forward rates and spot rates, assuming continuous compounding:

To the pay fixed, receive floating,

To the pay floating, receive fixed,

The important thing to note here is that the two positions are mirror images of each other.

A currency swap works much like an interest rate swap, but there are several key differences:

Currency swaps can be used to:

Two companies can also get into a currency swap to exploit their comparative advantages regarding borrowing in different currencies. For example,

If \(X\) wants to borrow \(£\), and \(Y\) wants to borrow \($\), the two may be able to able to save on their borrowing costs. That could happen if each borrows in the market in which they have a comparative advantage and then swapping into their preferred currencies for their liabilities.

Valuation of a Fixed for Fixed Currency Swap

There are two legs present in this example, a USD leg and a EURO leg.

To value this swap, we follow the below steps;

The value of the swap in USD is therefore:

Other Types of Currency Swaps

These two currency swaps are valued by valuing each leg in their respective currencies. In valuing the floating rate, we assume that the forward rate will be realized.

Other Types of Swaps

In an equity swap, one of the parties commits to making payments reflecting the return on a stock, portfolio, or stock index. In turn, the counterparty commits themselves to make payments based on either a floating rate or a fixed rate.

A swaption gives the holder the right to enter into an interest rate swap. It’s purchased for a premium whose value is determined by the strike rate specified in the swaption. Swaptions can either be American or European

A floating (or market or spot) price based on an underlying commodity is traded for a fixed price over a specified period.

Swaps can give rise to credit risk, especially when no collateral has been posted. The initial pricing of a transaction should, therefore, consider expected credit losses by each party.

Credit risk is greatly eliminated from transactions done through a central counterparty (CCP), and this is because the CCP requires both initial and variation margins to be posted. The margins can then be transferred to the affected party in case of a default.

A steel manufacturing firm recently issued a \($500 \quad million\) fixed-rate debt at 3% per annum to fund an ambitious expansion plan. The chief risk manager at the firm has advised that the firm convert this debt into a floating rate obligation by tapping into the interest rate swap market. In this regard, he has identified four other firms interested in swapping their debt from floating to a fixed rate. The table below provided the various rates at which all the five firms can borrow:

Identify the firm with which the manufacturer stands to yield the greatest possible combined benefit.

The net borrowing savings by entering into a swap is the difference between the spreads, i.e., \(\Delta \text{fixed} -\Delta \text{floating}\).

After completing this reading, you should be able to: Explain the distinctions between... Read More

After completing this reading, you should be able to: Describe the various types... Read More

After completing this reading, you should be able to: Explain the role of... Read More