Give yourself the best possible chance of success with AnalystPrep’s FRM exam part II study notes. The notes will help you develop in-depth knowledge and understand the principles needed to pass the exam. The study notes explain all the curriculum objectives, with worked examples and short questions to test your understanding.

FRM exam part II study notes build on concepts introduced in FRM I. It’s common to encounter questions that combine concepts from different topics. Our study notes are written in an easy-to-understand conversational tone. Whatever your professional background is, you can be sure to grasp all that’s needed.

We leverage expert FRM instructors to help you unravel key concepts and gain confidence as you revise. Plus, AnalystPrep’s FRM preparation packages are approved by the Association of Risk Professionals (GARP), so you know that the quality of the content is up to par with what you will encounter in the FRM exams. 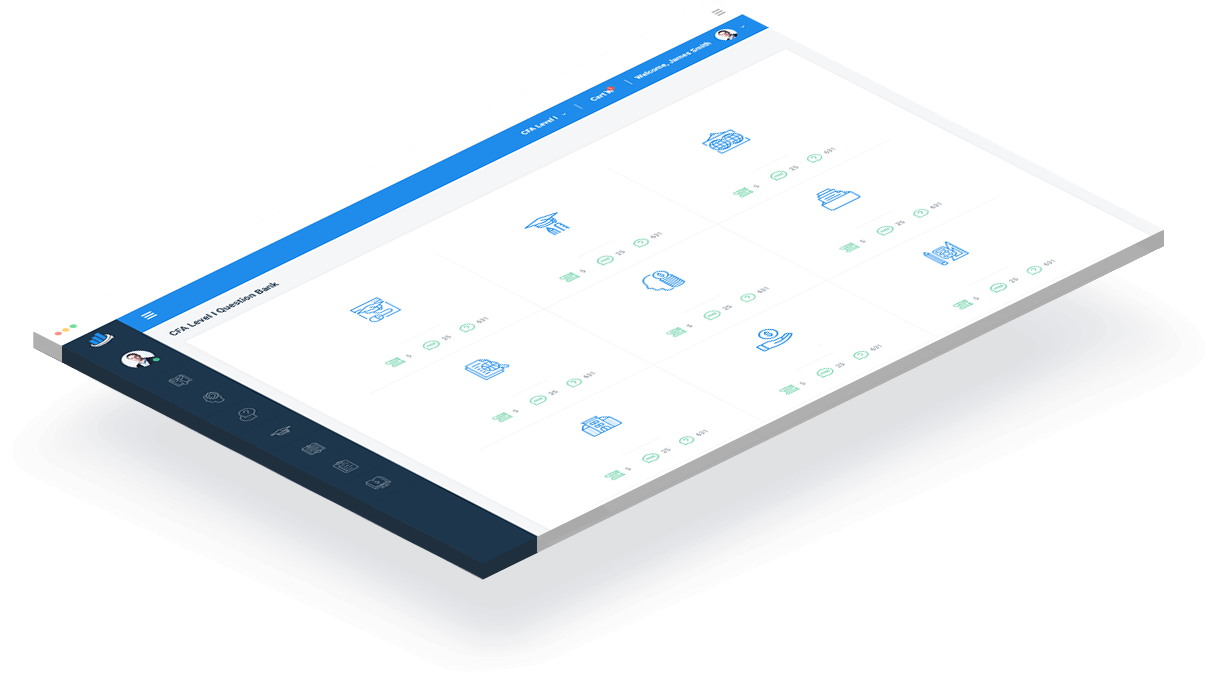 What Exactly Do you Get?

A Brand You Can Trust

AnalystPrep is an approved prep provider. Our FRM exam part II study notes are written by certified FRM professionals. You can be sure to find tips and top secrets gained through first-hand experience. We develop the notes in liaison with candidates to ensure you cover everything you need to pass. The FRM curriculum is updated regularly, and so do our study notes. You can be sure to get up-to-date content in line with the latest curriculum review.

Questions Answered by our Users

After completing this chapter, you should be able to:

In an FX swap agreement, one party borrows one currency from another party and, at the same time, lends another currency to the same counterparty. Each party utilizes the repayment obligation as the collateral. Moreover, the repayment amount is fixed at the FX forward rate at the beginning of the contract. 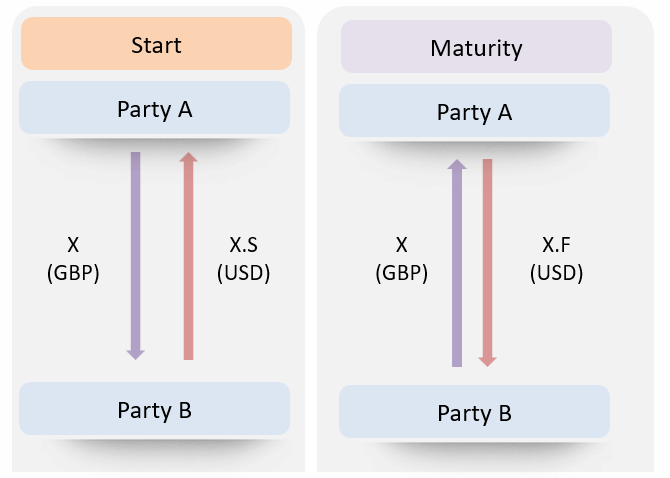 FX swaps are FX risk-free collateralized borrowing/lending. FX swaps do not incorporate an open currency position. More so, they assume that the associated counterparty, credit, liquidity risks, and market risks are negligible.

FX swaps and cross-currency swaps are both derivative instruments utilized in the hedging of foreign currency exposures, but there are some differences.

Let’s consider a European institution borrowing a one-year loan from its local domestic bank to fund its operations abroad in the U.S. For currency risk hedging, the institution chooses to enter a one-year currency swap (EUR/USD) with a market counterparty. As such, the institution swaps a specified amount of Euros from U.S dollars at the current spot rate, agreeing to get the funds swapped back at the same price rate in one year.

Since the European institution does not technically own the U.S. dollar, it instead pays back U.S. Libor as interest while receiving the Eurobond offered rate (Euribor) from the counterparty. Typically, this is as per the covered interest rate parity (CIP). Practically, when the demand for the dollar is high, the lending counterparty of the dollar will request to be paid a price premium. This is known as a “cross-currency basis.” The European institution will payout U.S Libor and, in return, receive Euribor plus the cross-currency basis.

Assume that the current U.S. Libor is 3.2%, and Euribor is -0.8%. This implies that the cost for the EUR/USD currency swap to say a European firm is 4%. That is, it not only pays out 3.2% on the dollar interest but also pays out 0.8% on the Euro interest since it is negative. This leads to a dollar shortage, and the counterparty quotes a “basis of -0.8%” The new swap for the European institution becomes:

The factors that determine the cross-currency swap basis include:

Covered interest rate parity is a hypothetical condition where the correlation between interest rates and spot and forward currency rates of two states are equal once the foreign currency risk is hedged. That means that there is no chance for arbitrage when using a forward contract under CIP.

Basically, in CIP, the spot exchange rate and cash market interest rates can be larger than the ones for FX derivatives. This shifts the currency swap and FX swaps that controls forward exchange rates away from CIP, thus providing an outcome of a non-zero basis. Such changes should typically immediately result in arbitrage transactions, bringing the basis back to zero. This is because, in the real world, CIP arbitrage is commonly treated as riskless.

\(r\) is the US dollar interest rate

Assume that a mid-market USD/CAD spot exchange rate is 1.4500 CAD with a one-year forward rate of 1.4380 CAD. Additionally, there is a 3% USD and a 4% CAD risk-free interest rate. Find out if the covered interest rate parity between the two currencies holds.

We need to establish whether:

The ratio of forward rate to spot rate:

The ratio of the rate of returns:

The formula is the interest rate parity holds is as follow:

For the covered interest rate parity to hold the exchange rate must be 2.2170 $/€.

The basis, \(b\), is the amount by which the interest rate on one of the legs has to be modified to match the pricing of FX swaps observed in the market:

Although banks have strengthened their balance sheets and regained easy access to funding since the great financial crisis, CIP is still violated. As mentioned earlier, CIP holds that the interest rate differential between two currencies in the money markets should be the same as the differential between the forward and spot exchange rates. Otherwise, arbitrageurs could make a seemingly riskless profit.

The cross-currency basis has been persistent since the GFC, indicating CIP violations. In the following section, we discuss these violations broadly in terms of hedging demand and tighter limits to arbitrage.

Demand for Currency Hedges: Why the Basis Opens Up

The demand for FX swaps is driven by hedging of open FX positions. Demand from non-financial firms, banks, and institutional investors make up the primary sources of hedging demand. These sources are insensitive to the size of the basis, and, hence, exert sustained pressure on it even when it is nonzero. In the next session, we discuss the structural causes of demand for foreign currency hedges:

Banks have commonly been known for being the chief players in running currency mismatches on their balance sheets. Given banks’ core deposit base, banking systems may be structurally short or long in specific currencies. A foreign currency funding shortfall can then be managed by borrowing cash in money markets and the bond market. FX swaps can be used to resolve the remaining gaps between banks’ assets and liabilities in a given currency. The unresolved gaps between banks’ liabilities and assets in each currency are referred to as closed currency derivatives, and an example is FX swaps. This depicts violations of covered interest rate parity.

For strategic hedging of foreign currency, institutional investors use swaps. An improvement has been registered in recent times in funding flows and cross-currency investments as a result of credit and term spread compression related to unconventional monetary policies in most of the countries. The hedge ratio for investors is usually insensitive to hedging costs and tends to move slowly over time. Therefore, anything that motivates the investors to reduce or increase their investments on foreign currency seemingly exerts pressure on the basis, resulting in CIP violation.

A CIP violation comes about as non-financial firms seek to borrow through opportunistic ways in markets where there is a narrower credit spread. It is of relevance when there is systematic variation in credit spread. For example, most U.S. companies seeking dollars have been issuing euros currency to take the opportunity of the very attractive spreads in that currency and have the proceeds swapped into dollars. This makes it possible for them to avoid currency mismatches in euros while using the dollars for their business activities. Essentially, they borrow dollars and lend Euros through the swap market.

Tighter Limits to Arbitrage: Reasons Why the Basis Does not Close

Arbitrage limits have been tightened by structural changes, especially on how market participants price the market, counterparty, credit, and liquidity after the Great Financial Crisis. In this scenario, the balance sheet is not free. Instead, it is rented.

Due to tighter management of threats and associated balance sheet constraints, the arbitrage incurs a cost per unit of balance sheet. The cost incurred is passed on to FX swaps pricing, in which a premium is introduced due to swap market imbalances. One of the outcomes is that the spot-forward relationship in the currency draws out of line with covered interest parity (CIP).

Typically, arbitrage can pose a lot of risks and high costs. An arbitrageur must expand its balance sheet, sustain credit risks in both investing and borrowing, and probably undergo mark-to-market and liquidity threats in the positions’ valuation. Post-crisis, participants have been able to manage these actual costs and risks that are in existence at all times. There has been increased pressure from creditors, shareholders, and authorities on the pricing of risks based on their relevant market after the Great Financial Crisis.

Also, dynamics in regulation have emphasized market pressures for the need for tighter management of balance sheet risks. More so, likely future exposure adjustment charges in U.S. leverage ratios and Basel III need the participants in the market to hold capital in as per their derivatives and other exposures. Mostly, the tighter limits on arbitrage make it complex to have the basis narrowed at any point when it opens due to pressures that reflect the present order imbalances.

Suppose the quarter-market USD/EUR spot exchange rate is 1.2345 EUR with a one-year forward rate of 1.3280 EUR. The market consists of a risk-free rate of 4% USD and 6% EUR, respectively. Establish whether there exists a covered interest rate parity between USD and EUR by choosing which of the following statements is correct.

Our FRM® study packages start as low as $249 with a one exam Practice package.

Our Learn + Practice packages include study notes and video lessons for $399.

“Thanks to your program I passed the first level of the CFA exam, as I got my results today. You guys are the best. I actually finished the exam with 45 minutes left in [the morning session] and 15 minutes left in [the afternoon session]… I couldn’t even finish with more than 10 minutes left in the AnalystPrep mock exams so your exams had the requisite difficulty level for the actual CFA exam.”

“I loved the up-to-date study materials and Question bank. If you wish to increase your chances of CFA exam success on your first attempt, I strongly recommend AnalystPrep.”

“Before I came across this website, I thought I could not manage to take the CFA exam alongside my busy schedule at work. But with the up-to-date study material, there is little to worry about. The Premium package is cheaper and the questions are well answered and explained. The question bank has a wide range of examinable questions extracted from across the whole syllabus. Thank you so much for helping me pass my first CFA exam.”

“@AnalystPrep provided me with the necessary volume of questions to insure I went into test day having in-depth knowledge of every topic I would see on the exams.”

“Great study materials and exam-standard questions. In addition, their customer service is excellent. I couldn’t have found a better CFA exam study partner.”

“I bought their FRM Part 1 package and passed the exam. Their customer support answered all of my questions when I had problems with what was written in the curriculum. I’m planning to use them also for the FRM Part 2 exam and Level I of the CFA exam.”

“I bought the FRM exam premium subscription about 2 weeks ago. Very good learning tool. I contacted support a few times for technical questions and Michael was very helpful.”

Hit enter to search or ESC to close