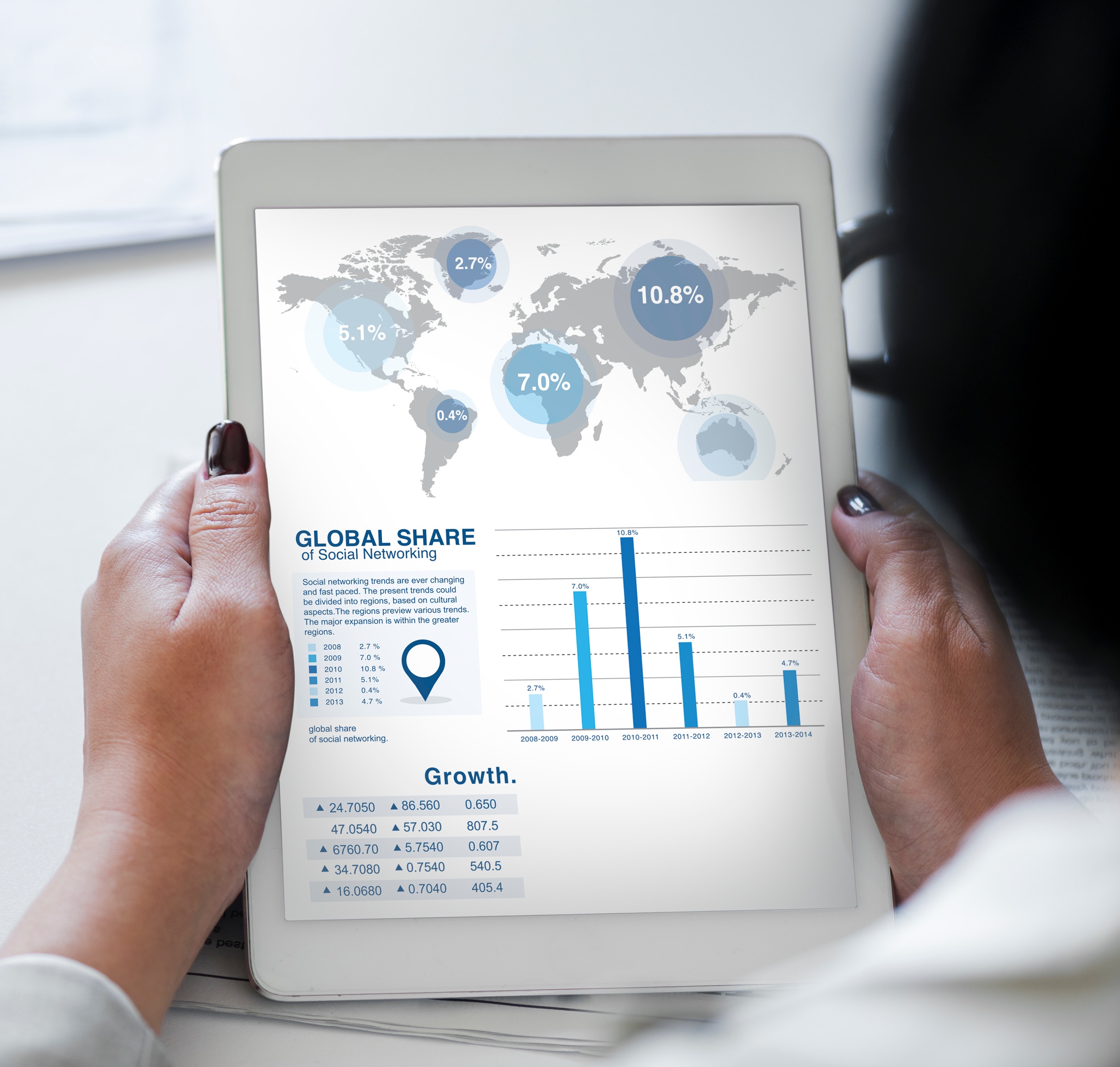 What is the Purpose of Risk Capital?

Risk capital acts as a cushion against the various risks taken on by a business. It takes the full brunt of the effects of taking risks, including misjudgments, adverse results, and outright losses. It serves two main purposes:

Risk capital is particularly important in the banking sector. Lenders who rely on customer deposits to fund loans and other investments must project financial integrity and financial stability so as to instill confidence among depositors. Even the slightest of rumors about financial turmoil can trigger a run, exposing the bank to serious liquidity problems.

Economic capital is an institution’s own capital estimate of the amount it needs to remain solvent and maintain its day-to-day operations. Regulatory capital is the minimum amount of capital an institution is required to hold in accordance with the bank regulators.

Although every organization has to contend with economic capital, regulatory capital only comes up in instances where the regulatory authority in a given industry puts in place standard across-the-board capital requirements that must be complied with by all participants in the industry. In this regard, banks and insurance companies are subject to regulatory capital in all geographical jurisdictions around the world. It is important to note that regulatory capital specifies the minimum required level of capital adequacy and thus may not capture the true level of risk in a firm. 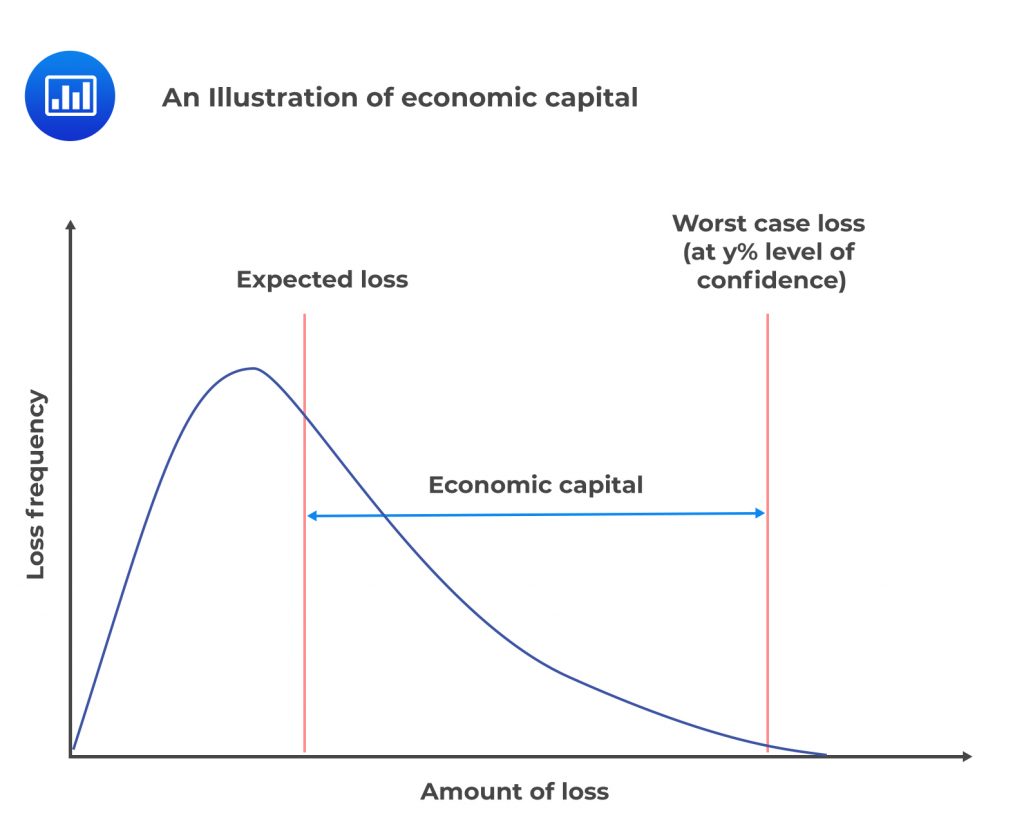 How are Risk Capital Numbers Used?

Traditionally, risk capital has been used as an indicator of the amount of capital a firm requires in order to remain solvent, given its portfolio of risky investments. In recent times, however, more uses have come up. These include:

Financial institutions have to demonstrate credit worthiness. For financial institutions, their customers double up as their creditors. That means customers are always monitoring the financial health of their bank. Customers make their deposits with the expectation that the safety of their deposits is not hinged on the bank’s economic performance in any way. Any signs of trouble can trigger a run, leaving the bank short of funds. For this reason, the bank has an incentive to maintain good creditworthiness at all times.

Banks are traditionally opaque institutions with complex books. They engage in complex transactions that often use proprietary technology that cannot be scrutinized by the ordinary stakeholder. In addition, the balance sheet position of a bank can change pretty fast, with liquidity being wiped out or even restored in a matter of hours or days. That means accounting analysis proves obsolete quite fast. For these reasons, banks have an incentive to maintain adequate risk capital and implement robust risk management frameworks to reduce agency costs and convince all stakeholders that the bank’s financial integrity is beyond reproach and that there’s no cause for concern.

A bank’s profitability is highly sensitive to its cost of capital. On the one hand, the bank cannot hold too much capital as that stifles profitability because the bank can only invest risk capital in safe, low yield assets. On the other hand, the bank cannot afford to hold risk capital that’s too little as this raises the specter of insolvency. As such, it is important that the bank strikes a balance between holding sufficient economic capital and uptake of risky but positive NPV projects.

Risk-adjusted return on capital (RAROC) is a metric used to determine the return on investment, taking full cognizance of elements of risk. It expresses the expected after-tax profit as a percentage of economic capital.

RAROC offers a uniform and comparable measure of risk-adjusted performance across all business units. A business unit is deemed to add value to shareholders only if its RAROC is higher than the cost of equity. The cost of equity can be calculated according to the capital asset pricing model.

Computing and Interpreting the RAROC

For purposes of capital budgeting, a more detailed RAROC equation is used:

Example: Computing and Interpreting the RAROC

A bank in the U.S. is considering building a portfolio of corporate loans with the following characteristics:

Compute the risk-adjusted return on capital.

As a first step, we have to work out all the values we need:

Interpretation: The annual after-tax expected rate of return on equity needed to support this portfolio is 13.77%

When calculating RAROC, practitioners usually adopt a one-year time horizon since this aligns with the business planning cycle and also presents a reasonable approximation of the amount of time that would be needed to recapitalize it the firm were to suffer a major unexpected loss. However, it is also possible to look at multi-period RAROC spanning as many as five years. This would help the firm to estimate the economic capital needed for longer-term transactions.

Notably, calculating economic capital over a longer horizon may not result in a significant increase in capital because the level of confidence in any firm’s solvency decreases as the time horizon increases. In the same vein, the quality and accuracy of risk and return data declines as we peer further into the future.

Due to the nature of markets to move significantly over short-term periods, market risk is measured using only short-term horizons – one day for risk monitoring, and 10 days for regulatory capital. As such, we have to adjust the one-day or ten-day VaR into an annual figure so as to determine the one-year capital allocation. The most common approach used to scale up the VaR to an annual value involves the use of the square root of time rule:

For purposes of risk capital determination, the use of the square root of time rule needs to be fine-tuned because of two main reasons:

Example: Required risk capital as a percentage of annualized VaR

A bank’s core risk level is below the current risk position. The following information is provided:

Assuming that there are 252 business days in a year, compute the required risk capital as a percentage of annualized VaR. 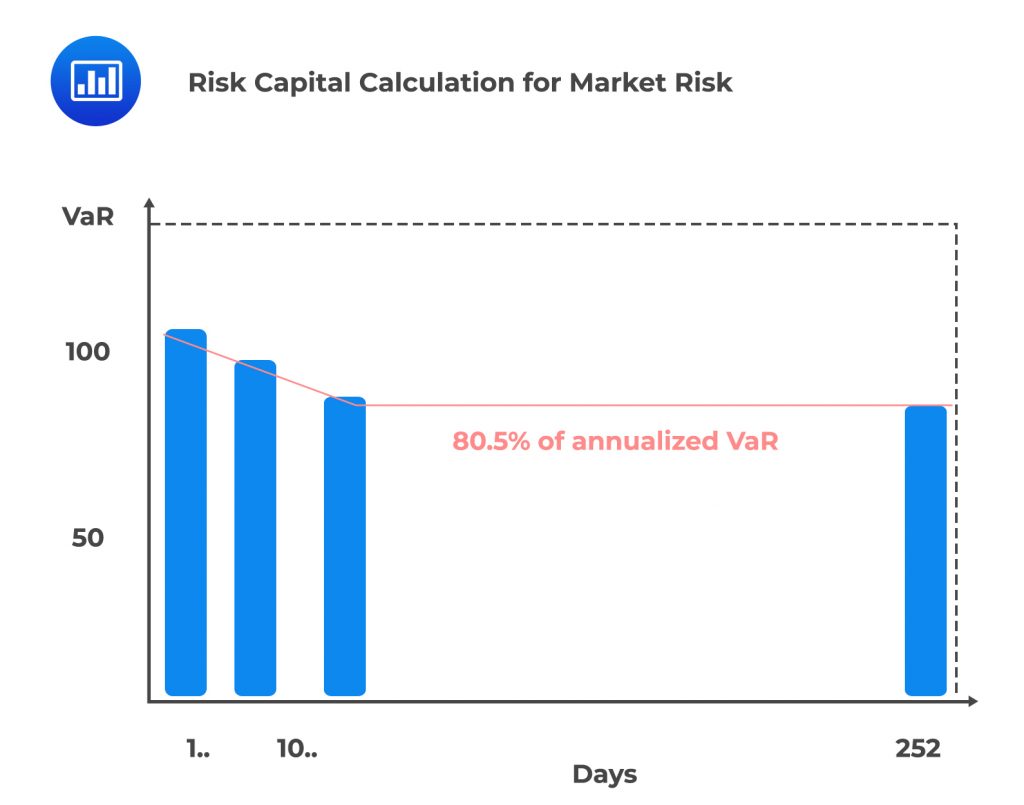 There are many more banking activities that must be allocated capital in a way that is sensitive to time horizons. In particular, the bank should allocate capital to cover the risk of options embedded in its products. A good example would be capital set aside to cover the option to prepay a mortgage.

As mentioned earlier, a firm’s calculation of economic capital should be consistent with its target credit rating. In practice, banks often target an AA rating for their debt offerings, translating to a probability of default of 3 to 5 basis points. This, in turn, corresponds to a level of confidence in the range of 99.95 to 99.97 percent.

There are two stylized approaches used to model the probability of default: a point-in-time approach and a through-the-cycle approach. 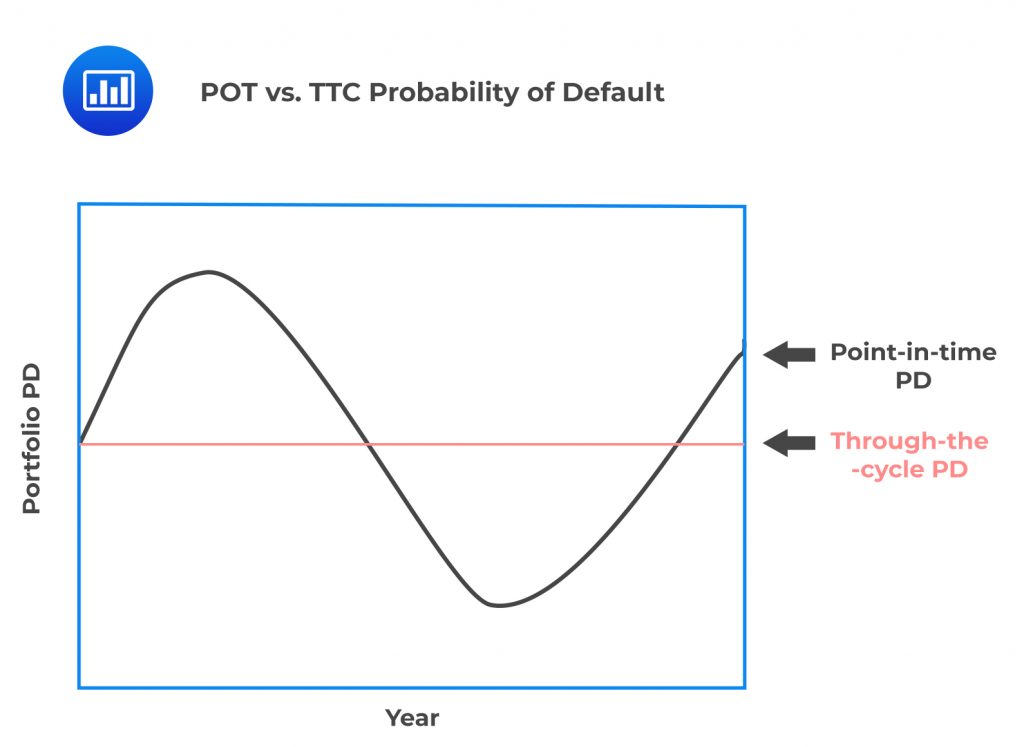 When a firm is considering venturing in a business or closing down one altogether, it computes the after-tax RAROC and then compares it to the firm’s hurdle rate. A hurdle rate is the minimum required rate of return or target rate that investors are expecting to receive on an investment.

The firm then applies a simple decision rule:

The hurdle rate is computed as the after-tax weighted average of the cost of equity capital:

The cost of preferred equity is taken to be the yield on the firm’s preferred shares. The cost of common equity is determined via the Capital Asset Pricing Model. 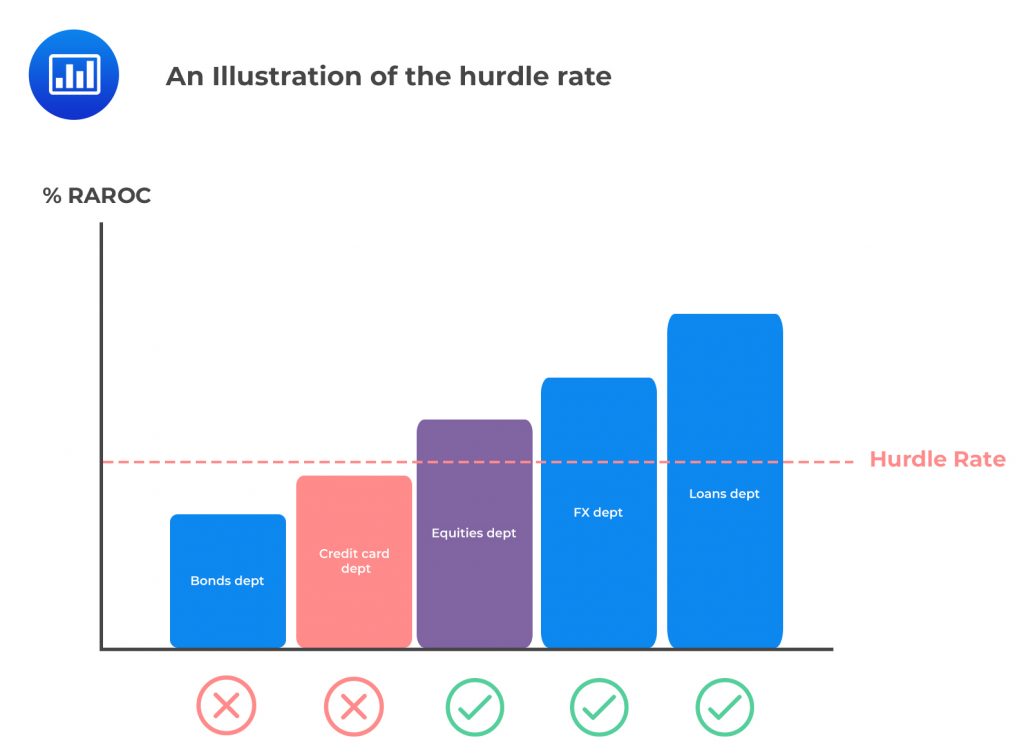 The adjusted RAROC (ARAROC) adjusts the traditional RAROC to take into account the systemic riskiness of returns, and use a hurdle rate that remains the same across all business lines.

The revised decision rule is as follows:

Assume that the complete array of risks facing a firm is as follows (all figures in millions):

Risk capital is given as the square root of the sum of squares of the four risk capital amounts:

As this example shows, the aggregate risk capital for the firm can be as high as $1,800 or as low as $927 – quite a wide range. Given this result, we would expect that any risk capital calculation process that takes into account diversification effects should yield an overall VaR figure in the range of 927 to $1,800.

Although there’s undoubtedly some diversification effect, measuring it is quite an uphill task. In fact, we do not have a model that can estimate the correlation between market risk, credit risk, and operational risk across all the business units with good enough accuracy. One way firms try to overcome this problem is by lowering the confidence level when measuring each individual risk so as to avoid an excessively high-risk capital amount.

It is logical to allocate more risk capital to a business unit whose earnings are highly correlated to the overall firm. But firms struggle to come up with a precise method of doing this, and most settle for a pro-rata allocation approach based on stand-alone risk capital amounts.

Assume that we have a business unit that engages exclusively in two activities – X and Y.

We can attribute this to each of the two activities on a pro-rata basis as follows:

Marginal capital is the additional capital required by an incremental deal, activity, or business. It takes into account the full benefit of diversification. In our case,

The issue of diversification and its effect on risk capital needs to be approached with a certain level of caution because correlations can change dramatically over time. During a financial crisis or severe period of stress, for example, correlations tend to shift toward 1 or -1. This reduces or even totally eliminates the diversification effect for some time.

There are a number of recommendations for firms that intend to implement a RAROC approach to the allocation of economic capital:

We have been given the following information for a project:

What is the RAROC for the project?

Range of Practices and Issues in Econo ...

After completing this reading, you should be able to: Within the economic capital... Read More

After completing this reading, you should be able to: Describe elements of an... Read More

After completing this chapter, you should be in a position to: Distinguish between... Read More