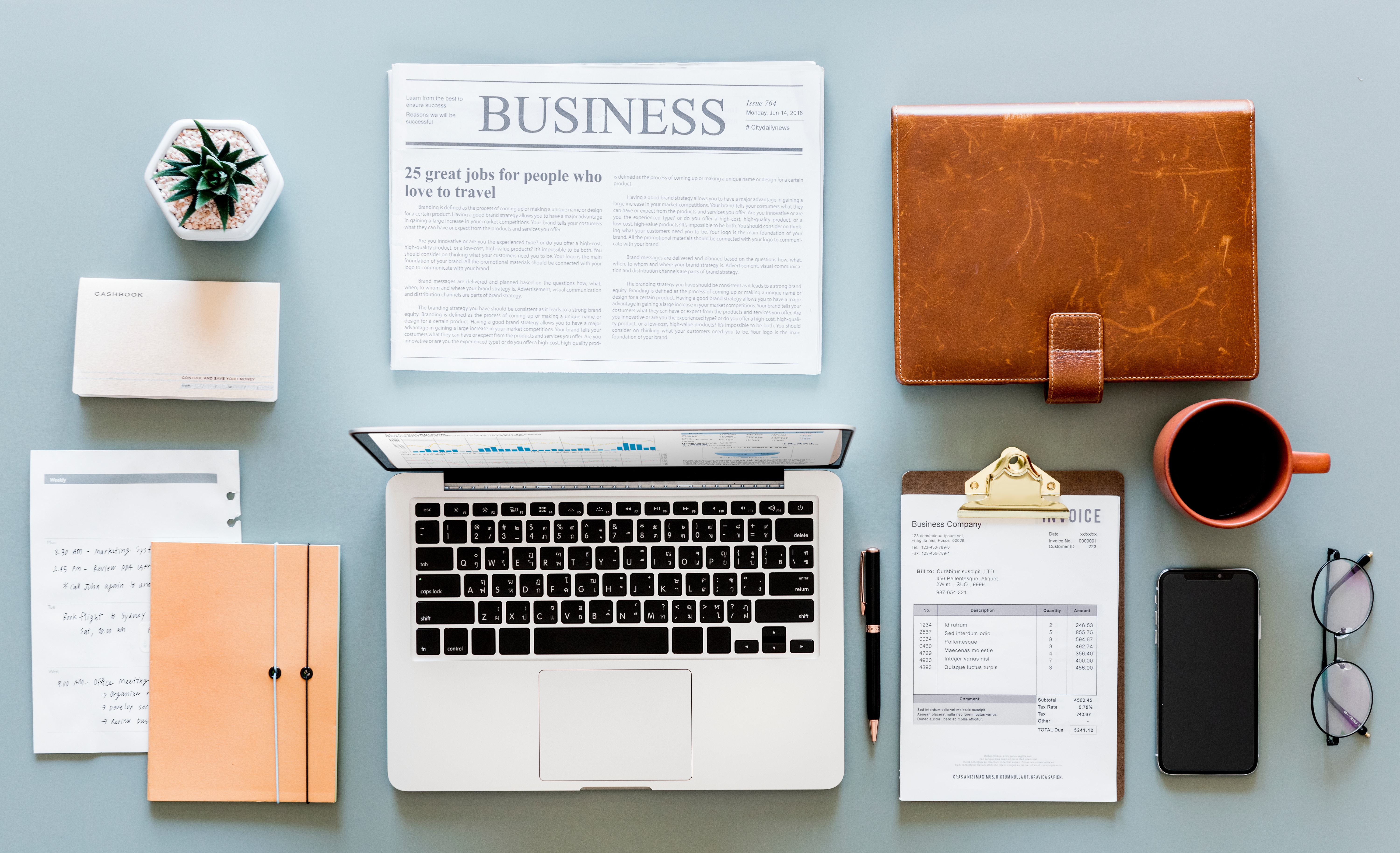 What is an Interest Rate?

An interest rate is a return earned by a lender on funds given out to a borrower.

Treasury rates are the rates earned by investors in instruments used by a government to borrow in its own currency. These include Treasury bonds and Treasury bills. Treasury rates are considered “risk-free” because they have zero risk exposure. That has much to do with the ability of the government to use a range of tools at its disposal to avoid default, including printing of cash and increased taxes. T-bill and T-bond rates are used as the benchmark for nominal risk-free rates.

LIBOR, the London Interbank Offered Rate, is the rate at which the world’s leading banks lend to each other for the short term. It’s the most widely used benchmark for short-term lending.

Libor rates are compiled from the estimates of unsecured borrowing rates of 16 highly rated global banks. The rates are estimated daily for five different currencies. Libor has seven borrowing periods ranging from one day to one year.

Repo rates are the implied rates on repurchase (repo) agreements. A repo agreement is an agreement between two parties – the seller and the buyer – where the seller agrees to sell a security to the buyer with the understanding that they (seller) will buy it back later at a higher price. The most common repo transactions are carried out overnight. The credit risk in a repo agreement depends on the term of the agreement as well as the creditworthiness of the seller.

The overnight interbank borrowing rate is the rate at which banks borrow from each other. Banks with excess reserves will lend to banks that have shortages. Cash reserves are kept at the central bank and are dependent on the liabilities of a bank. This type of borrowing occurs overnight. The overnight interbank rate, known as the fed funds rate in the US, is the main mechanism through which US monetary policy is channeled.

Assume two traders X and Y. A swap occurs when trader X agrees to pay trader Y a pre-determined fixed interest rate of 5% per year compounded quarterly, on a principal of say, $10,000, for five years. In return, trader Y agrees to pay trader X interest at the three-month Libor rate on the $10,000 principal for five years. Except for the first Libor rate, the Libor rates are unknown when the swap is agreed upon. In this example, interests will be exchanged every three months.

In the presence of continuous compounding, then:

Suppose USD 1,000 is invested for five years at an interest rate of 4% compounded quarterly per annum.

The table below shows the different future values when $50,000 is compounded at different compounding frequencies at the rate of 5% for three years.

Sometimes, compounding frequencies are determined based on the frequency of payments. Interests of money market instruments – instruments with maturities of less than one year – are expressed as quarterly if payment occurs after three months. If payments occur after six months, they are expressed as semiannual, and as annual if they occur yearly.

Discounting is the process of determining the present value of a known future amount.

The general discounting formula is:

Suppose an amount X is invested for five years at an interest rate of 4% compounded quarterly per annum. If the fund grows to USD 1,500 after 5 years, what is the value of X?

The Theoretical Price of a Bond Using Spot Rates

The theoretical price of a bond is given by the present value of all of the bond’s cash flows. Assuming each cash flow is associated with a spot discount factor \({ z }_{ j }\), then:

The price of the bond, in this case, is given by,

Duration, sometimes referred to as Macaulay duration, is an approximate measure of a bond’s price sensitivity to changes in interest rates.

Duration is expressed in years. For a zero-coupon bond, its duration is simply its time to maturity. For a coupon bond, its duration is shorter than maturity because the cash flows have different weights. $$\text{Macaulay Duration}=\frac{\sum_{t=1}^{n}\text{PV}(C_{t})T} {\text{Market Price of Bond}}$$ Where \(\text{PV}(C_{t})\) is the present value of coupon payments at time t, and T is the time to maturity

The formula for Macaulay duration, given continuous compounding, is:

Modified duration is used in the absence of continuous compounding of the yield. If the yield, \(y\), is expressed as a rate compounded \(n\) times a year, then:

Note: By yield, we imply the yield to maturity.

Consider the bond in the previous example, and suppose that the yield with semi-annual compounding is 5 %.

The modified duration is thus given by:

Exam tip: Unless given, you must calculate the Macaulay duration to determine the modified duration.

For illustration, consider the bond in the example above, the dollar duration is given by,

Note that the approximate duration relationship is given by:

Which is equivalent to,

This problem is addressed by convexity.

Convexity is a measure of the curvature in the relationship between bond prices and bond yields. It demonstrates how the duration of a bond changes as the interest rate changes. Convexity estimates the amount of market risk affecting a bond or portfolio.

If we let C be the convexity, then equation 1 above can be refined so that we have:

With this equation, relatively large parallel shifts can now be considered. 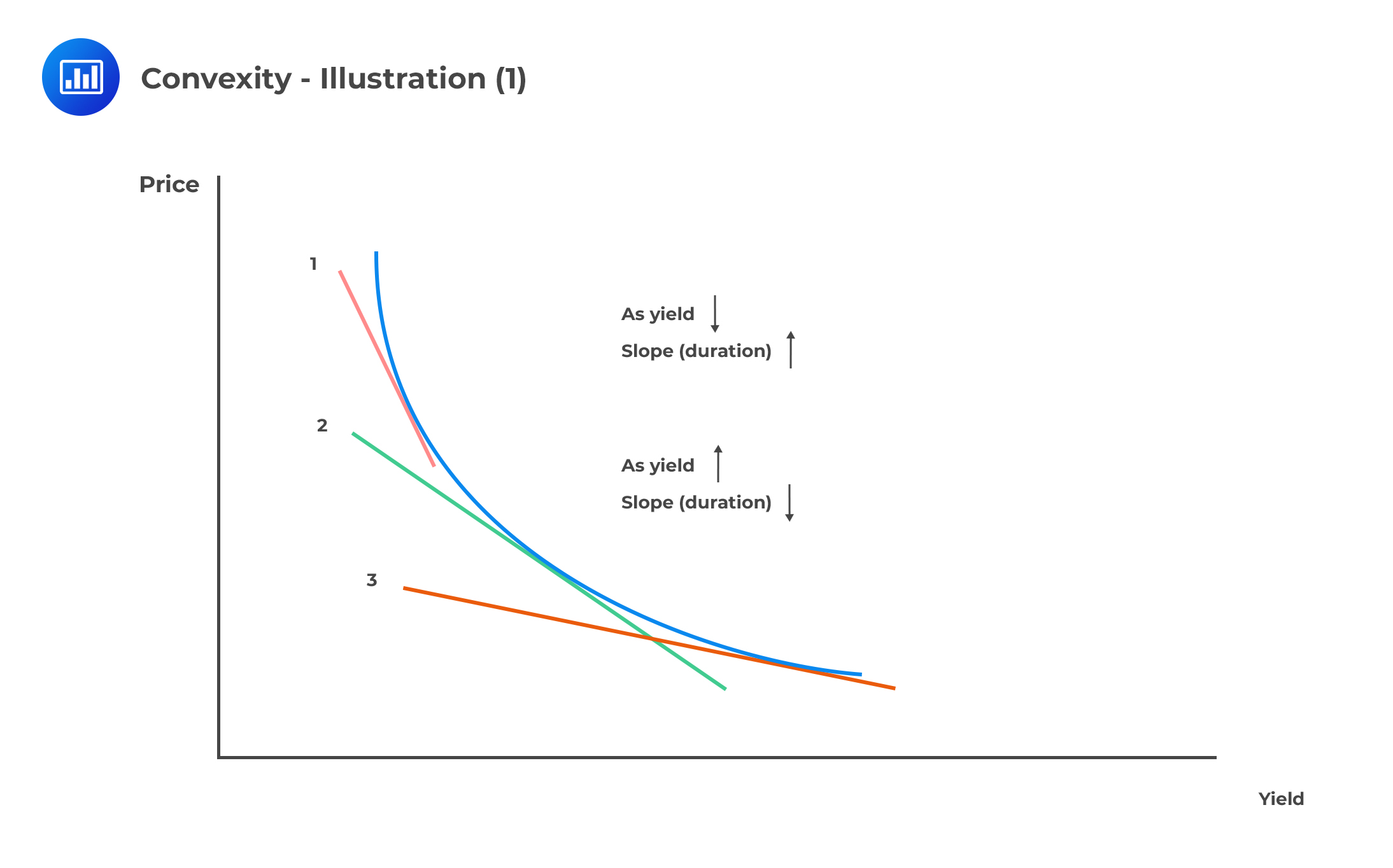 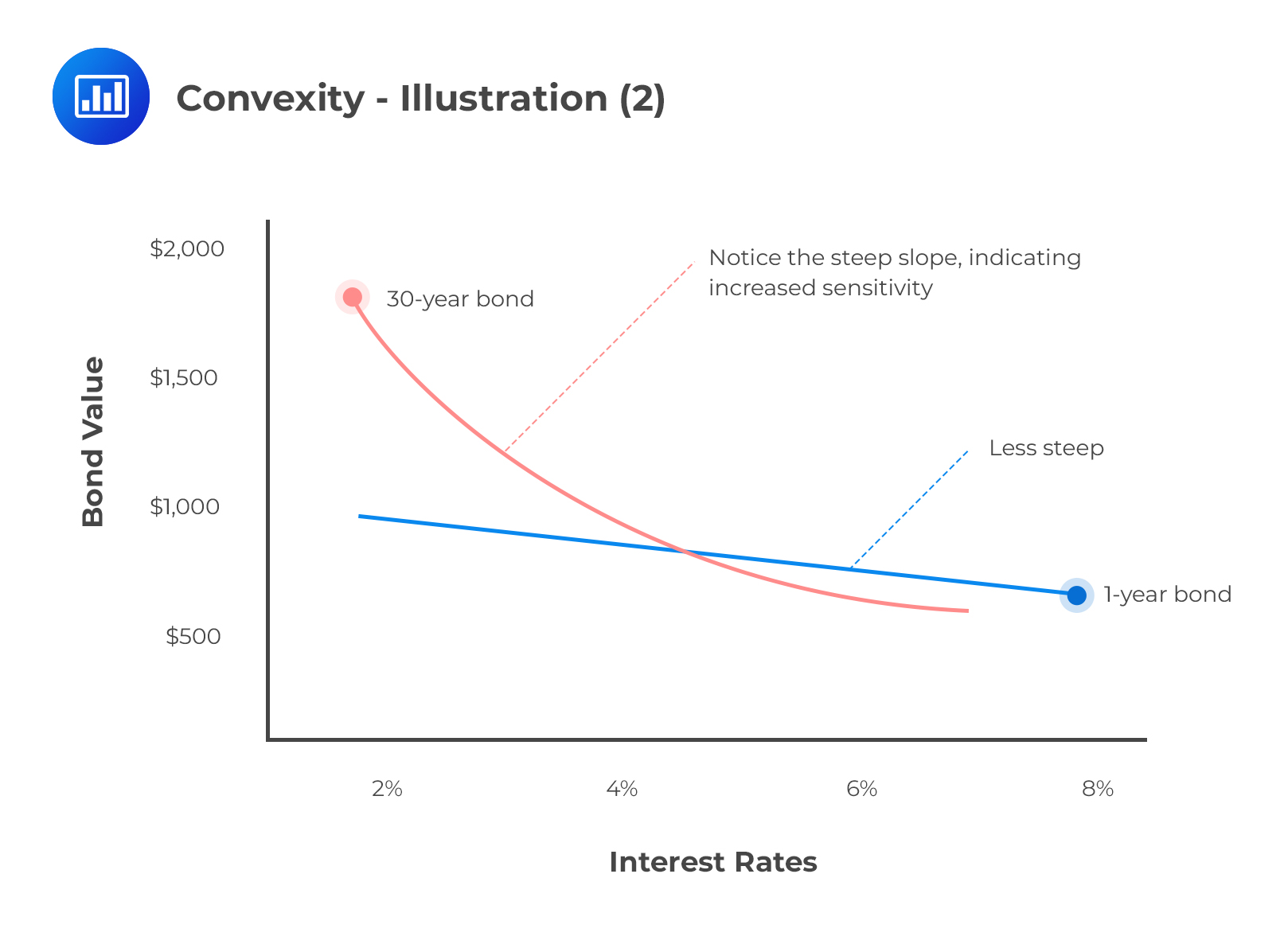 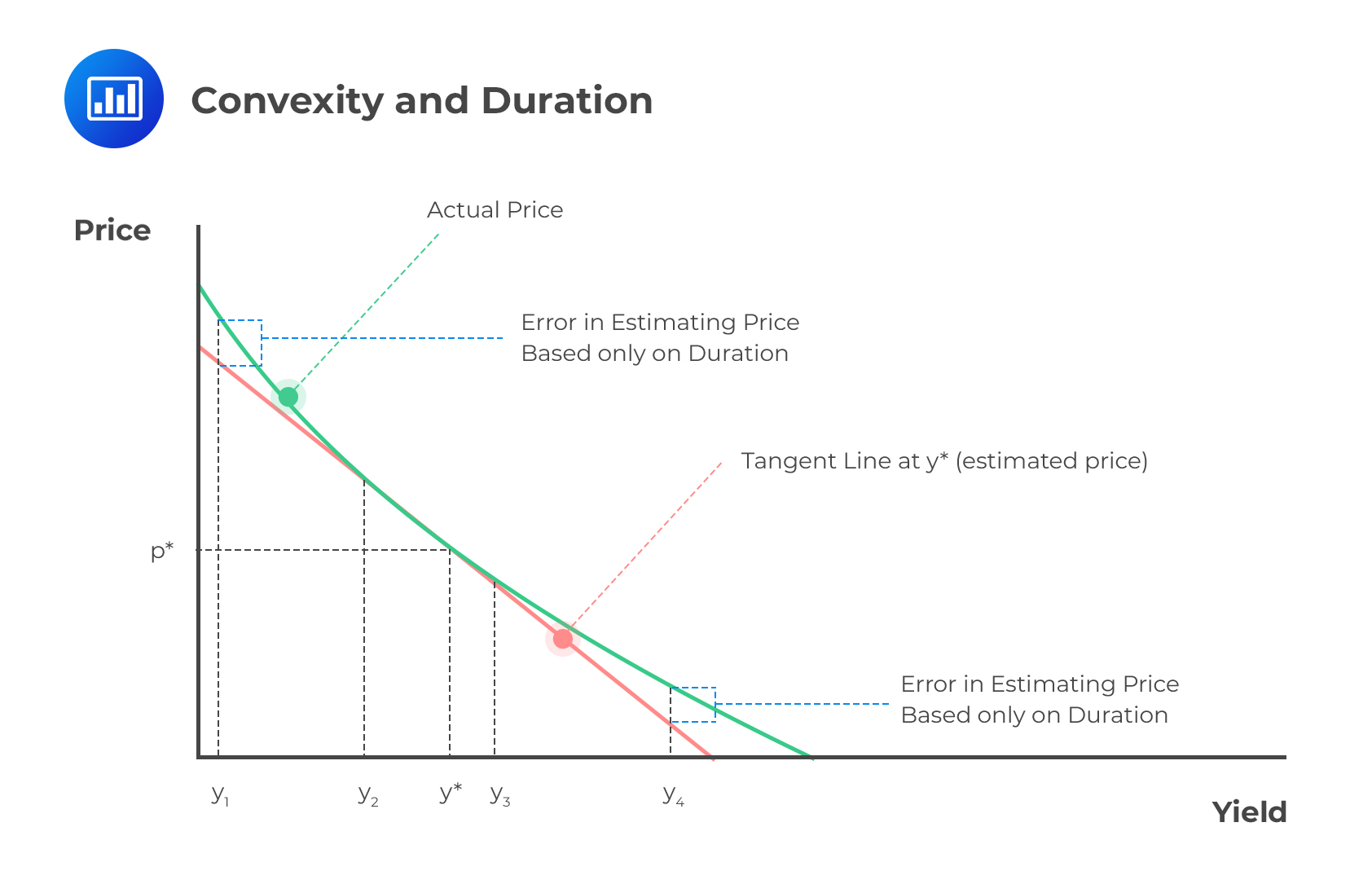 For the purpose of the percentage change in price triggered by convexity, i.e., the price change not explained by duration, we must calculate the convexity effect.

Calculating the Change in a Bond’s Price Given Its Duration, Its Convexity, and a Change in Interest Rates

Combining duration and convexity results in a far more accurate estimate of the change in the price of a bond given a change in yield.

Example: Change in a Bond’s Price

A portfolio manager has a bond position worth 100 million. The position has a modified duration of 3 years and a convexity of 60. Assuming that the term structure is flat, by how much does the value of the position change if interest rates increase by 25 basis points?

With every increase in interest rates of 25 basis points, the bond’s price will decrease by $731,250

Deriving Forward Rates from a Set of Spot Rates

The above results for 1-year forward rate can be generalised as follows,

Step 1: Use the formula:

If the forward rate is expressed with semiannual compounding:

Therefore the forward rate is 6.6% expressed with semiannual compounding

Let’s say you have the following spot rates table:

The one-year forward rate between years 1 and 2 is:

In the same vein, we can calculate the one-year forward rate between years 3 and 4:

Take the example shown above. If the interest rate is expressed with continuous compounding:

Rearranging the above gives the forward rate F as:

Assume the data in the following spot rates table is continuously compounded:

Calculate the continuously compounded forward rate between years 1 and 2.

As you can see, when dealing with continuous compounding, the spot rate is simply multiplied by the time period instead of using \((1+y_t)^t\).

FRAs are cash-settled on the settlement date – the start date of the notional loan or deposit. The interest rate differential between the market rate and the FRA contract rate determines the exposure to each party. It’s important to note that as the principal is a notional amount, there are no principal cash flows. 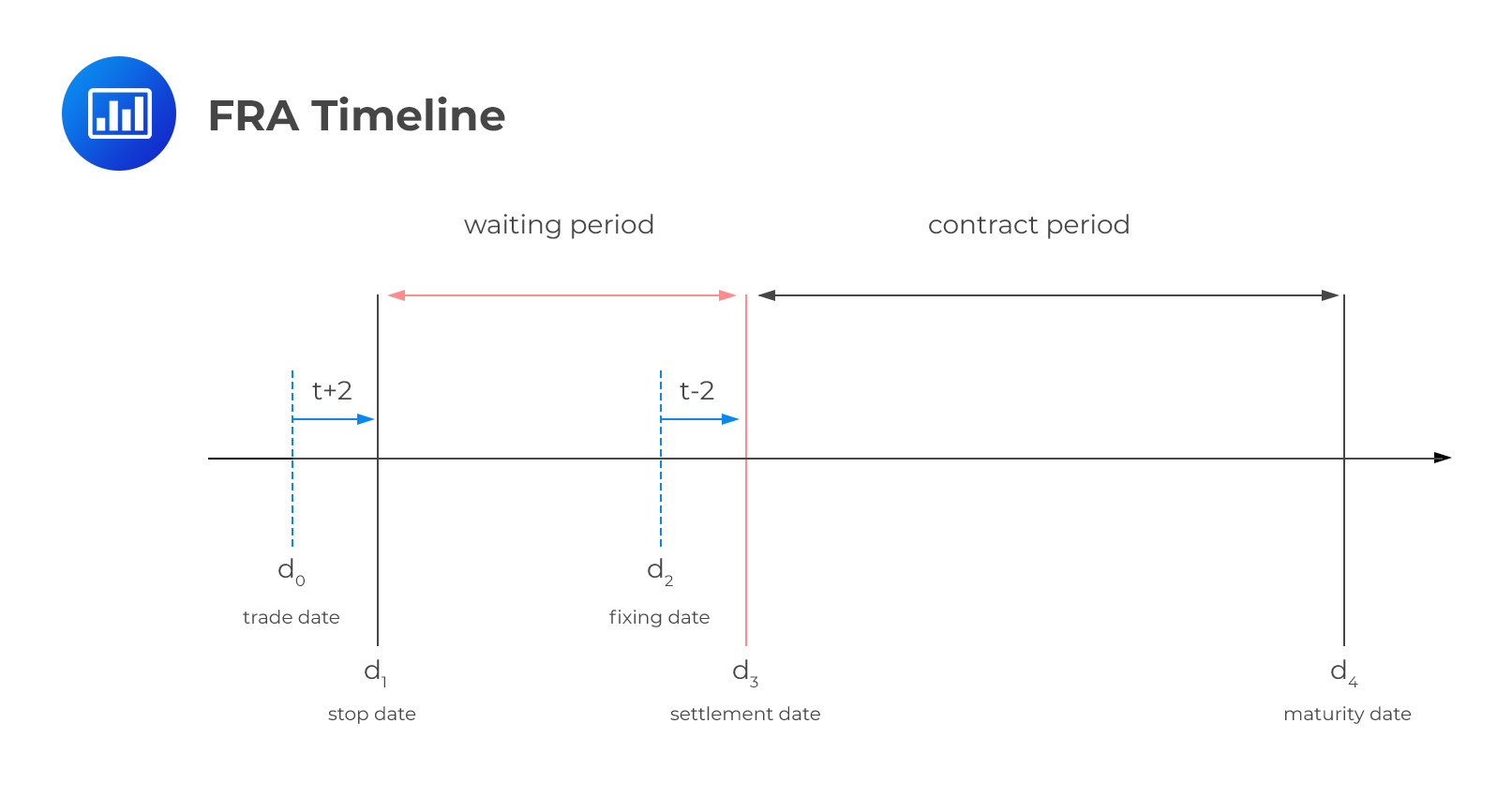 As time passed, the agreed fixed rate \(R_K\) remains the same but the forward LIBOR rate \(R_F\) is likely to move in either direction.

Therefore, the value of the forward contract to both parties will be:

A German bank and a French bank entered into a semiannual forward rate agreement contract where the German bank will pay a fixed rate of 4.2% and receive the floating rate on the principal of €700 million. The forward rate between 0.5 years and 1 year is 5.1%. If the risk-free rate at the 1-year mark is 6%, then what is the value of the FRA contract between the two banks?

A zero-coupon interest rate is also known as zero-rate or spot rate. This is the interest rate that is applied when an investor receives the total return, i.e, interest, and principal at the maturity of the bond.

Consider the following example for illustration,

Theories of the Term Structure

Since traders do not focus on only one part of the interest rate term structure, this theory is considered to be unrealistic.

Liquidity considerations create a mismatch between borrowers and lenders as it makes borrowers want to borrow for longer periods and lenders want to lend for shorter periods. Financial intermediaries attempt to fix this mismatch, and in so doing, supply and demand are matched at both maturities.

A portfolio manager has a bond position worth CAD 200 million. The position has a modified duration of six years and a convexity of 120. Assuming that the term structure is flat, by how much does the value of the position change if interest rates increase by 50 basis points?

With every increase in interest rates of 50 basis point, the bond’s price will decrease by $5.7 million.

Performing Due Diligence on Specific Managers and Funds

After completing this reading, you should be able to: Explain how a large... Read More

After completing this reading you should be able to: Describe the principal components... Read More

After completing this reading, you should be able to: Explain and give examples... Read More

Applying the CAPM to Performance Measu ...

After completing this reading, you should be able to: Calculate, compare, and evaluate... Read More