Failure to manage and mitigate market liquidity risk in derivatives markets can have disastrous consequences in global financial markets. Following the 2007/2009 financial crisis, a trove of regulatory initiatives commenced, aimed at narrowing the regulatory gap between the OTC market (Over-the-counter) and the exchange traded market. Notably, leaders from the G20 group of nations agreed to have almost all derivatives traded on exchanges or electronic trading platforms and cleared through a central counterparty. In this chapter, we delve into the clearing process of OTC derivatives and look at regulatory changes that have since been introduced in an attempt to increase transparency and reduce risk.

The over-the-counter market is a decentralized trading platform, without a central physical location, where market participants use a host of communication channels to trade with one another without a formal set of regulations. The communication channels commonly used include telephone, email, and computers. OTC trading is facilitated by a derivatives dealer who usually is a major financial institution specialized in derivatives.
In an OTC market, it’s possible for two participants to exchange products/securities privately without others being aware of the terms, including the price. OTC markets are much less transparent than exchange trading.

Stocks traded in an OTC market could belong to a small company that’s yet to satisfy the conditions for listing on the exchange. The OTC market is also popular for large trades.

Advantages of OTC markets over exchanges include:

Disadvantages of OTC markets compared to exchanges include:

Clearing is the procedure by which derivative trades settle – that is, the correct and timely transfer of funds between the buyer and the seller.

There are two main approaches: bilateral clearing and central clearing.

In bilateral clearing, trades are agreed bilaterally between a buyer and a seller with the contract typically taking the form of an ISDA Master Agreement (ISDA stands for International Swap and Derivatives Association). A section of this agreement, called the credit support annex, outlines all collateral arrangements agreed to between the buyer and seller. This part outlines the acceptable forms of collateral, the collateral that should be posted by each side (if any), and also haircuts that could be applied.

The main body of the ISDA agreement then outlines systematically how to proceed in the event that one of the parties defaults. In this regard, defaulting could be either failing to make payments as they fall due, or failing to post collateral as initially agreed.

Trades settled bilaterally are referred to as non-cleared OTC trades.

Since they are negotiated bilaterally, non-cleared trades often lack market uniformity and rank very low in terms of transparency. What’s more, the absence of complex regulation means counterparties can get into complex trades that do not have strict collateral requirements, which leads to higher counterparty risk.

In central clearing, the entire process is handled by a central counterparty which provides services similar to those offered by a fully-fledged exchange clearing house. When two parties, A and B agree to transact, they are required to present the OTC derivative to the CCP for clearing. If the CCP accepts it, the CCP becomes an interposed intermediary and enters into offsetting transactions with the two parties. 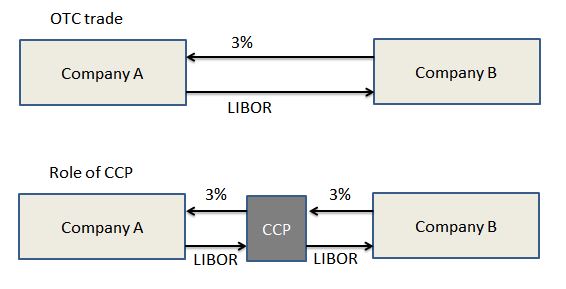 CCP clearing means that a CCP becomes the legal counterparty to each trading party, providing a guarantee that it will honor the terms and conditions of the original trade even in the event that one of the parties defaults before the discharge of its obligations under the trade. To be able to do this, the CCP collects enough money from each party which goes toward covering potential losses that may be incurred if a party fails to follow through on the initial agreement.

The following view, although a bit simplistic helps to further demonstrate the role played by CCPs in trading by contrasting non-cleared trades (left) with cleared trades (right). Each of the six entities denoted B represents a dealer bank.

From the view, we can see two advantages of having CCPs in financial markets:

The legal process by which a CCP interposes itself between the buyer and the seller is referred to as contract novation. The CCP becomes a buyer to every seller and a seller to every buyer. In essence, novation replaces one “direct” contract with another indirect contract, implying that the initial contract between counterparties ceases to exist, and the counterparties no longer have counterparty risk with respect to one another. It’s the CCP that bears the counterparty risk. However, the CCP bears not the net market risk, which remains with the original parties to the trade.

In the years leading up to the 2007/2009 financial crisis, about 75% of OTC transactions involved bilateral arrangements. Only 25% involved central clearing. Post-crisis measures being put in place are aimed at reversing these percentages to have most OTC transactions cleared through a CCP. However, the process might take some time because the complex nature of some transactions prevents them from being cleared. Bilateral transactions have the upper hand because they give room for creativity and freedom to trade in complex derivatives. In addition, it has been argued that the CCPs are not immune from financial strain. By handling a large number of transactions, CCPs result in concentration of risk, and failure of just a single CCP could have serious consequences that could stretch beyond the derivatives industry.

The few transactions that are exempted from the ongoing reforms include nonstandard transactions, select foreign exchange transactions, and trades involving non-financial entities.

In order to have effective risk control over the trade, the CCP requires each party to post collateral that can be seized in the event of default. The initial margin must be posted when initiating the contract. Typically, the initial margin is set such that it is 99% certain to cover market moves over a 5-day period. If the equity in the initial margin account falls below the maintenance margin, the relevant party receives a margin call – a requirement to provide additional funds to restore the margin account to the initial level.

The amount payable to restore the initial margin to the required amount is called the variation margin. The variation margin is settled daily, usually in cash. If a member fails to provide the required variation margin, the CCP closes out its transactions with that member. Margin requirements can be settles using either cash or Treasury instruments. The CCP pays interest on cash balances.

a) What price change would lead to a margin call?

b) Under what circumstances would $2,500 be withdrawn from the margin account?

One important difference between a futures (exchange) transaction and a typical OTC transaction is that the former is settled daily, while the latter involves payments only on specified days. What’s more, following an increase in the futures price and subsequent flow of cash margin from the house member with a short position to the exchange clearing house, the margin no longer belongs to the clearing house member and no longer earns interest. In OTC markets, transfer of cash variation margin from party A to party B, through the CCP, results in party A earning interest and party B paying interest on the funds transferred.

Just like in exchange transactions, OTC transactions involve members contributing to a default fund. If a party to a transaction is not a member of the CCP, they are allowed to clear transactions through members. Whenever a member fails to post margin when required, they are declared defaulters and their positions closed out. In the process of closing out, the CCP may incur a loss. The party to bear the loss is determined by way of a waterfall, in the following order:

Netting refers to the treatment of all transactions between two parties as a single transaction when calculating collateral requirements or processing early terminations following a default event. Netting reduces credit risk because it rules out a situation where a member defaults on out-of-the-money positions while continuing to honor positions that are in the money. Furthermore, netting can reduce the initial margin required.

Party A has two transactions with party B: an interest rate swap worth $100 million and an oil futures contract worth -$60 million. For purposes of calculating the itial margin, the two transactions are combined to form a single transaction worth $40 million.

How Defaults are handled

In the event of a default or bankruptcy, derivatives transactions are treated differently from other transactions. For example, ISDA master agreements contain an early termination provision that takes precedence over bankruptcy rules. This provision states that, if there is an “event of default,” the non-defaulting party has the right to terminate all transactions with the defaulting party after a short period of time has elapsed. Moving quickly is aimed at recouping as much as possible from the defaulting member before the situation turns drastic. Events that constitute default are failure to make payments, post collateral or the declaration of bankruptcy.

Following a default event, the non-defaulting party calculates the mid –market value of outstanding transactions. The party is then allowed to adjust these transactions in its favor by half the bid offer spreads on the transactions for the purposes of calculating the settlement amount. The adjustment is some sort of a compensation in recognition of the fact that the party will have to replace the transactions by trading with other dealers and will have be subject to their bid-offer spreads when that happens.

As noted earlier, the OTC derivatives market took a sizeable share of the blame after the 2007/2009 financial crisis. The crisis has over time led to many regulations to enhance the clearing process and strengthen collateral requirements. Leaders from the G20 group of nations came up with three major changes:

The other notable regulation that has been introduced has altered the pool of assets that can be posted as collateral. Most of the collateral required will have to be in form of cash or Treasury instruments to enhance liquidity. Banks will be required to hold liquid assets that are sufficient to meet any margin calls (which have to be met immediately).

The new developments have resulted in some sort of convergence of ORTC and exchange-traded markets:

Under new Basel Committee rules, traders will be allowed to rehypothcate the initial margin only once, and even then, certain conditions will have to be met. Variation margin can be rehypothecated.