For example, let X be the random variable as a result of rolling a die. Therefore, x is the outcome of one roll, and it could take any of the values 1, 2, 3, 4, 5, or 6. The probability that the resulting random variable is equal to 3 can be expressed as:

Examples of discrete random variables include:

There are two functions used when explaining the features of the distribution of discrete random variables: probability mass function (PMF) and cumulative distribution function (CDF).

This function gives the probability that a random variable takes a particular value. Since PMF outputs the probabilities, it should possess the following properties:

Assume that X is a Bernoulli random variable, the PMF of X is given by:

The Random variables in a Bernoulli distribution are 0 and 1. Therefore,

The graph of the Bernoulli PMF is shown below, assuming the p=0.7. Note that PMF is only defined for X=0,1. 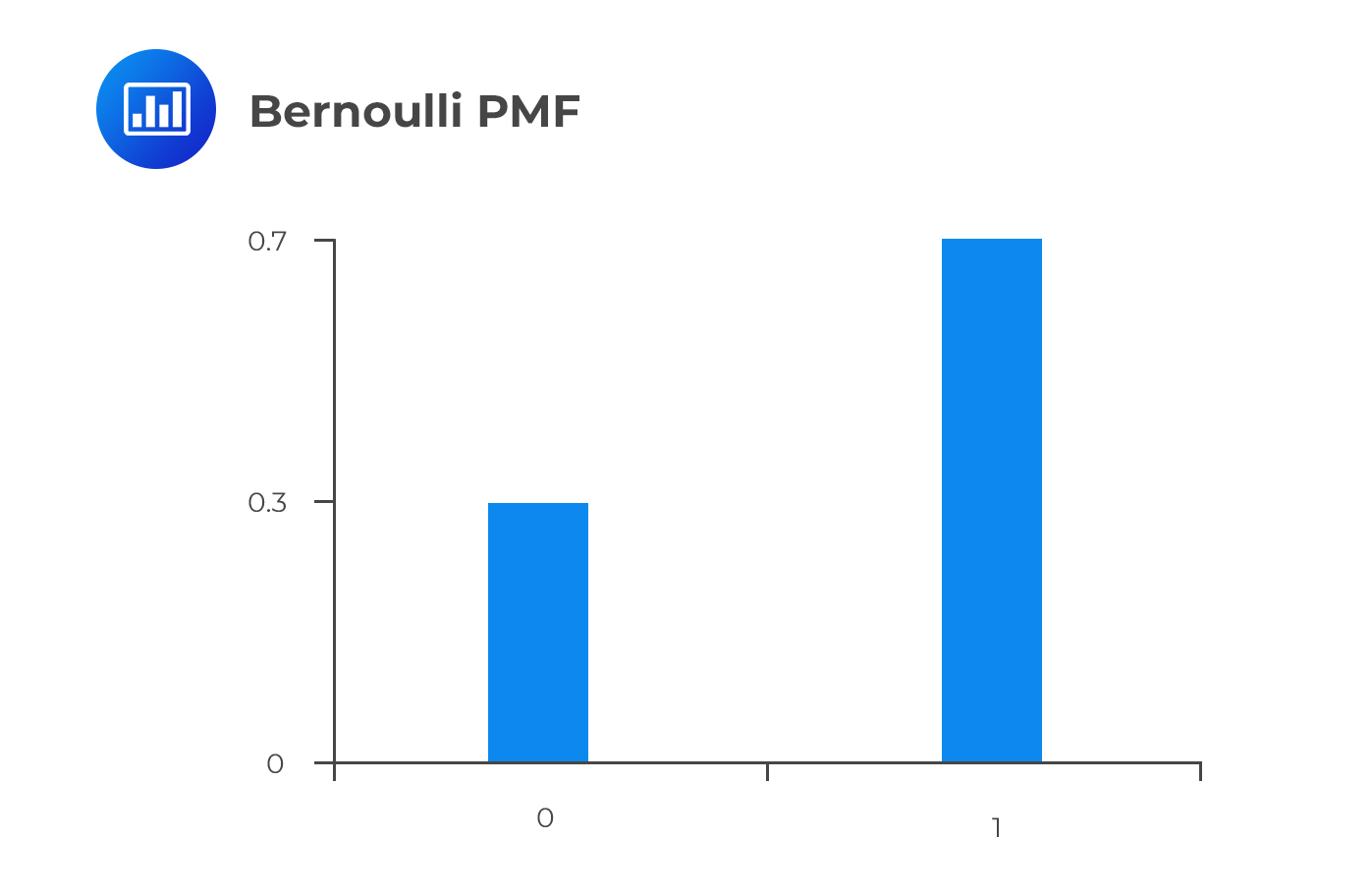 $$ F_X (x)=Pr⁡(X \le x) $$ CDF is monotonic and increasing in x since it measures total probability. It is a continuous function (in contrast with PMF) because it supports any value between 0 and 1 (in the case of Bernoulli random variables) inclusively.

For instance, the CDF of the Bernoulli random variable is:

\(F_X (x)\) is defined for all real values of x. The graph of \(F_X (x)\) against x begins at 0 then rises by jumps as values of x are realized for which p(X = x) is positive. The graph reaches its maximum value at 1. For the Bernoulli distribution with p=0.7, the graph is shown below: 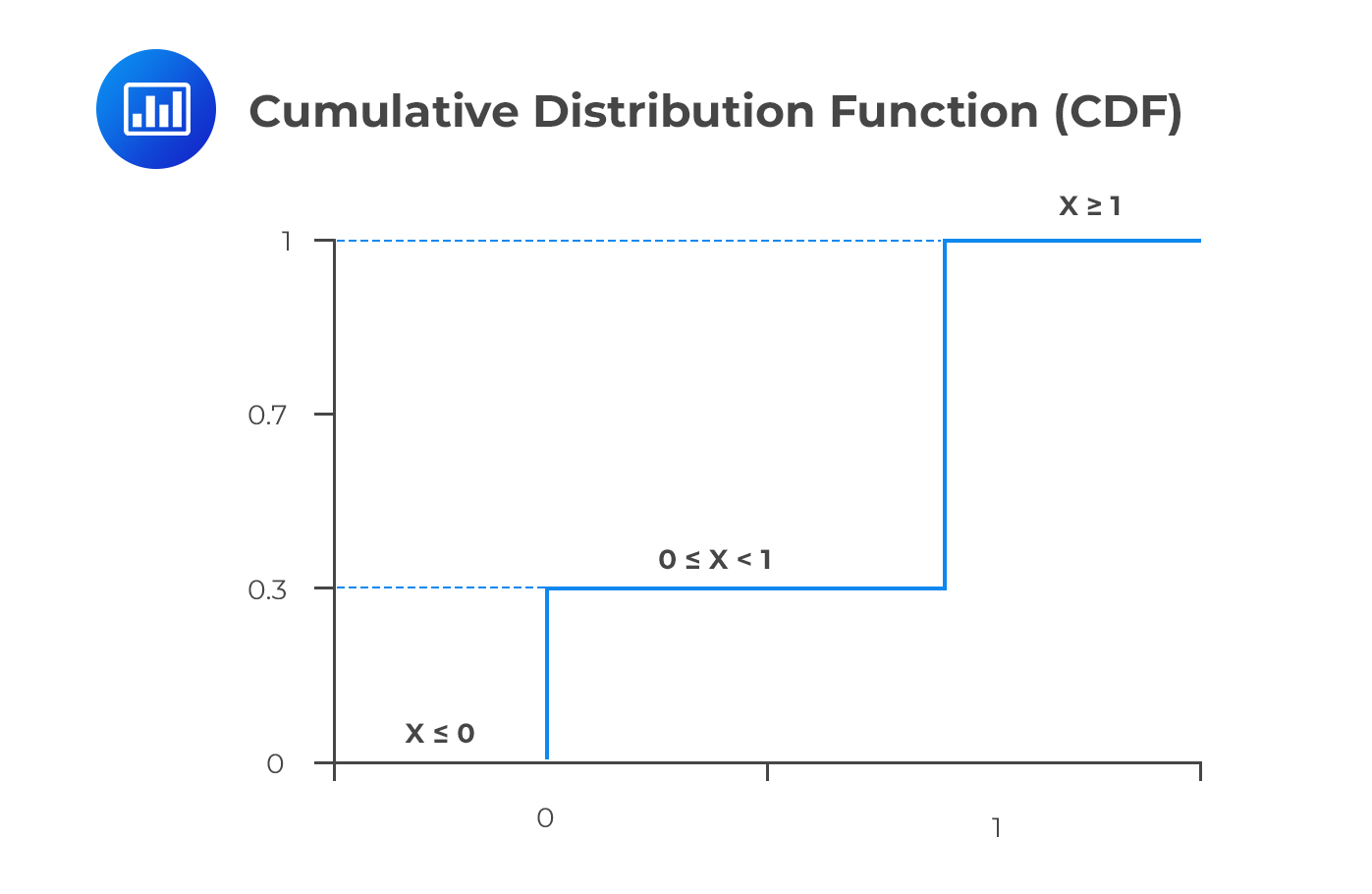 The corresponding graph is as shown above

Relationship Between the CDF and PMF with Discrete Random Variables

The CDF can be represented as the sum of the PMF for all the values that are less than or equal to x. Simply put:

On the other hand, PMF is equivalent to the difference between the consecutive values of X. That is:

There are 8 hens with different weights in a cage. Hens1 to 3 weigh 1 kg, hens 4 and 5 weigh 2kg, and the rest weigh 3kg. We need to develop the PMF and the CDF.

The random variables (X = 1kg, 2kg, or 3kg) here are the weights of the chicken,

The following relationship holds for a continuous random variable X:

Given a PDF f(x), we can determine the probability that x falls between a and b:

Probability distribution function is another term used to refer to the probability density function. The properties of the PDF are the same as those of PMF. That is:

It is also called the cumulative density function and is closely related to the concept of a PDF. CDFA CDF defines the likelihood of a random variable falling below a specific value. To determine the CDF, the PDF is integrated from its lower bound.

The corresponding density function’s capital letter has traditionally been used to denote the CDF. The following computation depicts a CDF, F(x), of a random variable X whose PDF is f(x):

$$ F(a)=\int_{-\infty}^{a}f(x)d(x) =P[X \le a] $$ The region under the PDF is a depiction of the CDF. The CDF is usually non-decreasing and varies from zero to one. We must have a zero CDF at the minimum value of the PDF. The variable cannot be less than the minimum. The likelihood of the random variable is less than or equal to the maximum is 100%.

To obtain the PDF from the CDF, we have to compute the first derivative of the CDF. Therefore:

The following relationship is also true:

Example:Formulating the CDF of a Continuous Random Variable

There are 8 hens with different weights in a cage. Hens 1 to 3 weigh 1 kg, hens 4 and 5 weigh 2kg, and the rest weigh 3kg. We need to calculate the mean weight of the hens.

For the continuous random variable, the mean is given by:

$$ E[X]=\int_{-\infty}^\infty xf(x)dx $$ Basically, it is all about integrating the product of the value of the random variable and the probability assumed by the corresponding random variable.

Example: Calculating the Expected Value of a Continuous Random Variable

We need to calculate E[X].

Assume that the random variable function is g(x). Then:

The Variance of a Random Variable

The variance of random variable measures the spread (dispersion or variability) of the distribution about its mean. Mathematically,

We need to calculate Var[X].

$$ \mu_1=E(X) $$ Therefore, the first moment provides the information about the average value. The second and higher moments are broadly divided into Central and Non-central moments

The mean is the first moment and is given by: $$ \mu=E(X) $$ It is the average (also called the location of the distribution) value of X.

This is the second moment. It is presented as: $$ \sigma^2=E([X-E(X)]^2 )=E[(X-\mu)^2 ] $$ The variance measures the spread of the random variable from its mean. The standard deviation (\(\sigma\)) is the square root of the variance. The standard deviation is more commonly quoted in the world of finance because it is easily comparable to the mean since they share the measurement units.

Skewness can be positive or negative.

The Kurtosis is defined as the fourth standardized moment given by: $$ \text{Kurt}(X)=\cfrac {E([X-E(X)]^4 }{\sigma^4} =E \left[ \left( \cfrac {X-\mu}{\sigma} \right)^4 \right] $$ The description of kurtosis is analogous to that of the Skewness only that the fourth power of the Kurtosis implies that it measures the absolute deviation of random variables. The reference value of a normally distributed random variable is 3. A random variable with Kurtosis exceeding 3 is termed to be heavily or fat-tailed. 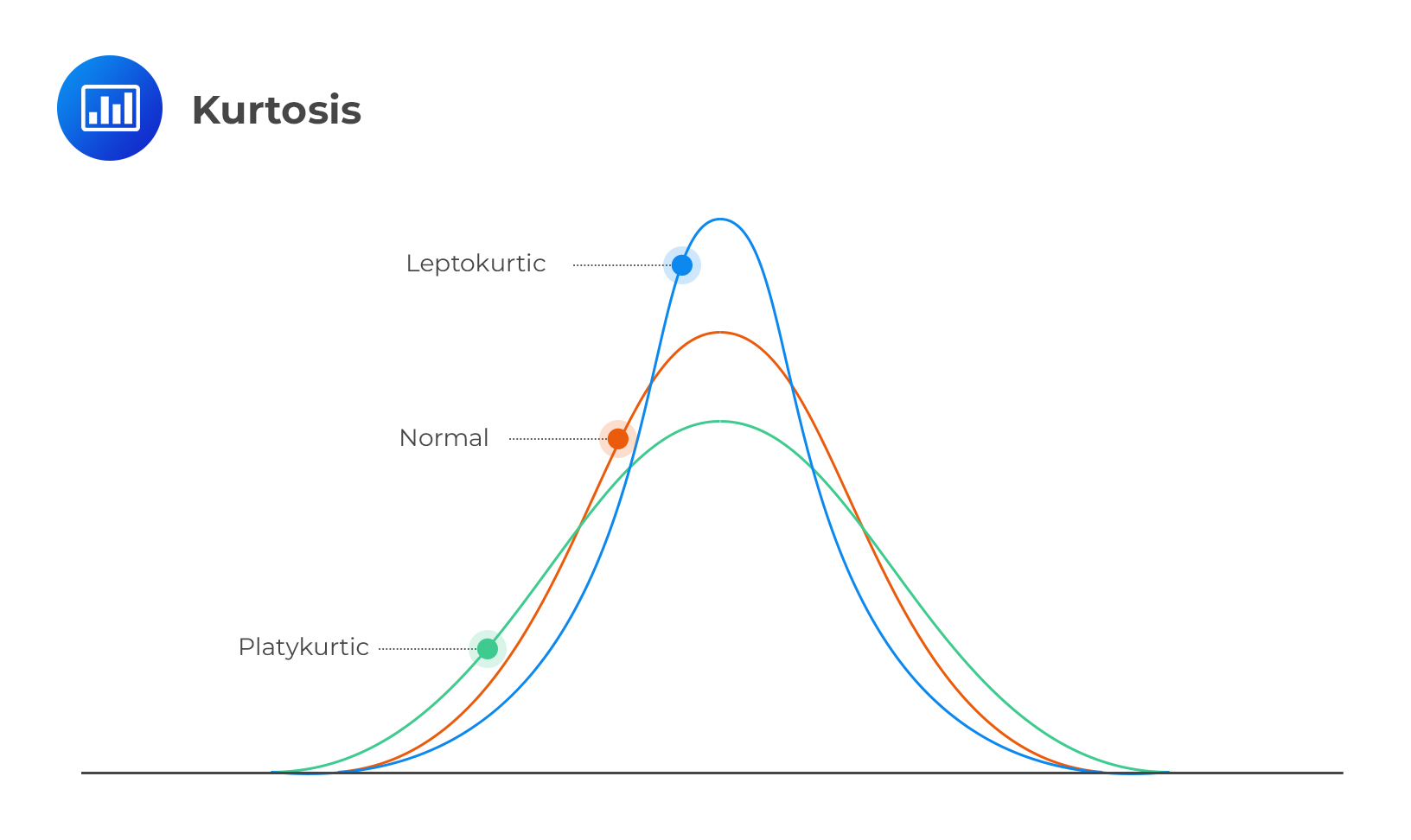 Effect of Linear Transformation on Moments

In very basic terms, a linear transformation is a change to a variable characterized by one or more of the major math operations:

Transformation results in the formation of a new random variable.

Linear transformation of random variables is informed by the fact that many variables used in finance and risk management do not have a natural scale.

Suppose your salary is \(\alpha\) dollars per year, and you are entitled to a bonus of \(\beta\) dollars for every dollar of sales you successfully bring in. Let X be what you sell in a certain year. How much in total do you make?

We can linearly transform the sales variable X into a new variable Y that represents the total amount made.

Where \(\alpha\) serves as the shift constant and \(\beta\)  as the scale constant.

Effect on Mean and Variance

The standard deviation of Y is given by:

It also follows that \(\alpha\) does not affect the standard deviation.

Effect on Skewness and Kurtosis

It can also be shown that if \(\beta\) is positive (so that \(Y=\alpha +\beta x\) is an increasing transformation), then the skewness and kurtosis of Y are identical to the skewness and kurtosis of X. This is because both moments are defined on standardized quantities, which removes the effect of the shift constant \(\alpha\) and the scaling factor \(\beta\). This can be seen as follows:

Just like any data, quantities such as the quantiles and the modes are used to describe the distribution.

For instance, if X is a continuous random variable, the median is defined to be the solution of:

The interquartile range (IQR), is an alternative measure of spread. It is given by:

Example: Calculating the Quartiles of a PDF

The random variable X has a pdf given by:

The mode measures the common tendency, that is, the location of the most observed value of a random variable. In a continuous random variable, the mode is represented by the highest point in the PDF.

The graph below shows the difference between unimodal and bimodal distributions.

After completing this reading, you should be able to: Describe the basic steps... Read More

After completing this reading, you should be able to: Explain the mechanics... Read More

After completing this reading, you should be able to: Define derivatives, describe the... Read More

After completing this reading you should be able to: Describe linear and nonlinear... Read More