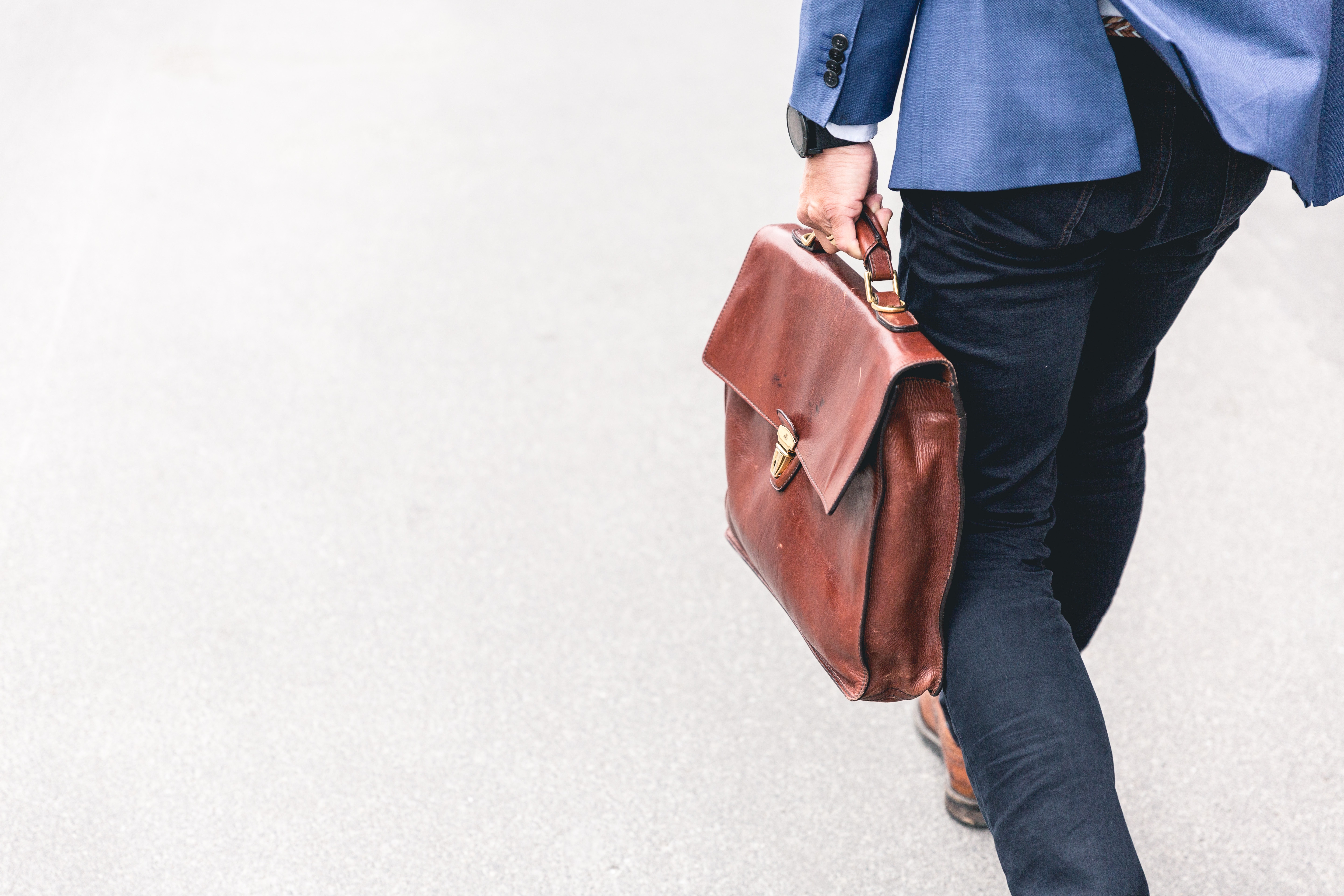 Components of the Hypothesis Testing

The elements of the test hypothesis include:

The null hypothesis, denoted as H0, represents the current state of knowledge about the population parameter that’s the subject of the test. In other words, it represents the “status quo.” For example, the U.S Food and Drug Administration may walk into a cooking oil manufacturing plant intending to confirm that each 1 kg oil package has, say, 0.15% cholesterol and not more. The inspectors will formulate a hypothesis like:

A test would then be carried out to confirm or reject the null hypothesis.

Other typical statements of H0 include:

Using our FDA example above, the alternative hypothesis would be:

The typical statements of H0 include:

Note that we have stated the alternative hypothesis, which contradicted the above statement of the null hypothesis.

A test statistic is a standardized value computed from sample information when testing hypotheses. It compares the given data with what we would expect under the null hypothesis. Thus, it is a major determinant when deciding whether to reject H0, the null hypothesis.

The test statistic is a random variable that changes from one sample to another. Test statistics assume a variety of distributions. We shall focus on normally distributed test statistics because it is used hypotheses concerning the means, regression coefficients, and other econometric models.

We shall consider the hypothesis test on the mean. Consider a null hypothesis \(H_0:μ=μ_0\) . Assume that the data used is iid, and asymptotic normally distributed as:

Where \({\sigma}^2\) is the variance of the sequence of the iid random variable used. The asymptotic distribution leads to the test statistic:

Note this is consistent with our initial definition of the test statistic.

The following table  gives a brief outline of the various test statistics used regularly, based on the distribution that the data is assumed to follow:

Just like with any other statistic, the distribution of the test statistic must be specified entirely under H0 when H0 is true.

While using sample statistics to draw conclusions about the parameters of the population as a whole, there is always the possibility that the sample collected does not accurately represent the population. Consequently, statistical tests carried out using such sample data may yield incorrect results that may lead to erroneous rejection (or lack thereof) of the null hypothesis. We have two types of error:

Type I error occurs when we reject a true null hypothesis. For example, a type I error would manifest in the form of rejecting H0 = 0 when it is actually zero.

The level of significance denoted by α represents the probability of making a type I error, i.e., rejecting the null hypothesis when, in fact, it’s true. α is the direct opposite of β, which is taken to be the probability of making a type II error within the bounds of statistical testing. The ideal but practically impossible statistical test would be one that simultaneously minimizes α and β. We use α to determine critical values that subdivide the distribution into the rejection and the non-rejection regions.

The Critical Value and the Decision Rule

Note that prior to decision making, one must decide whether the test should be one-tailed or two-tailed. The following is a brief summary of the decision rules under different scenarios:

Decision rule: Reject H0 if the test statistic is less than the critical value. Otherwise, do not reject H0. 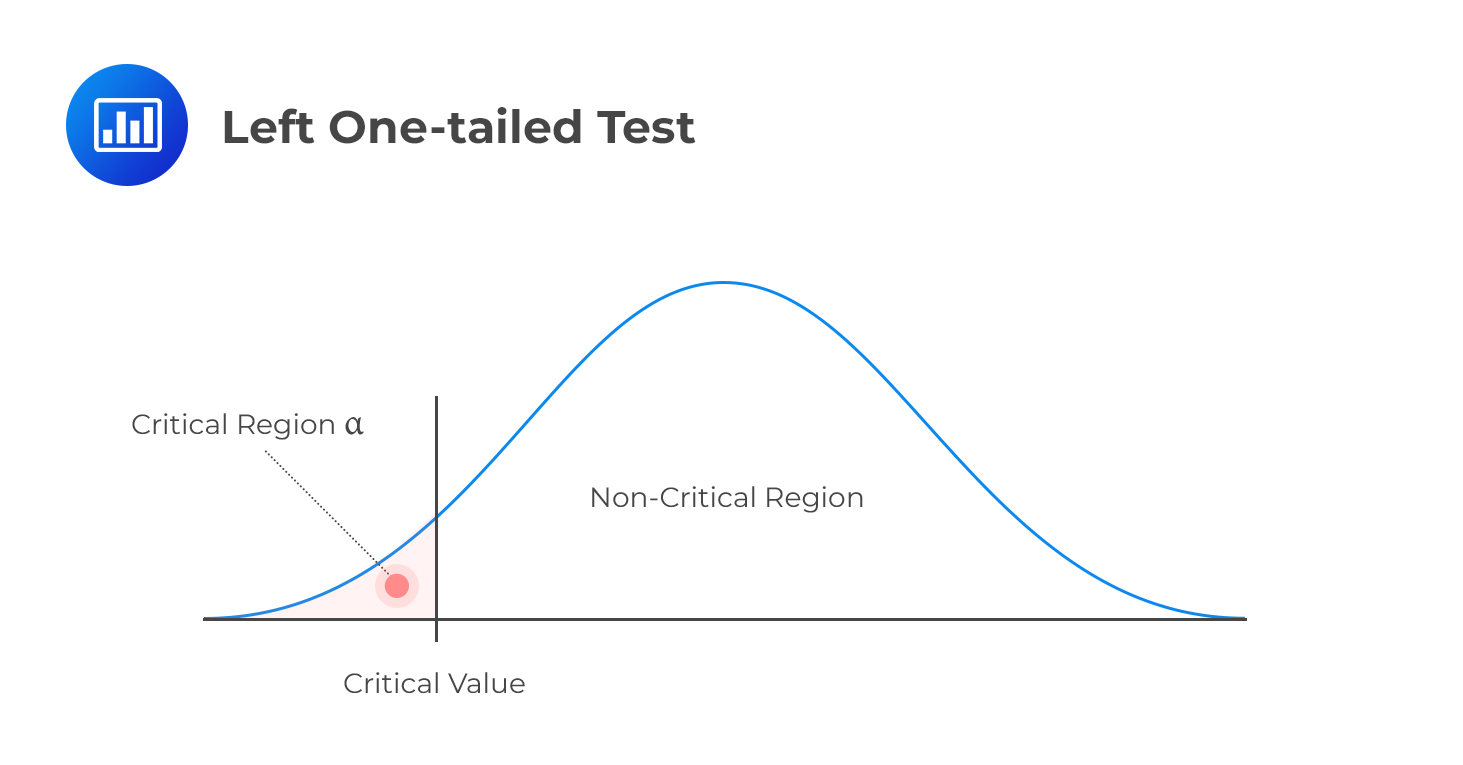 Decision rule: Reject H0 if the test statistic is greater than the critical value. Otherwise, do not reject H0. 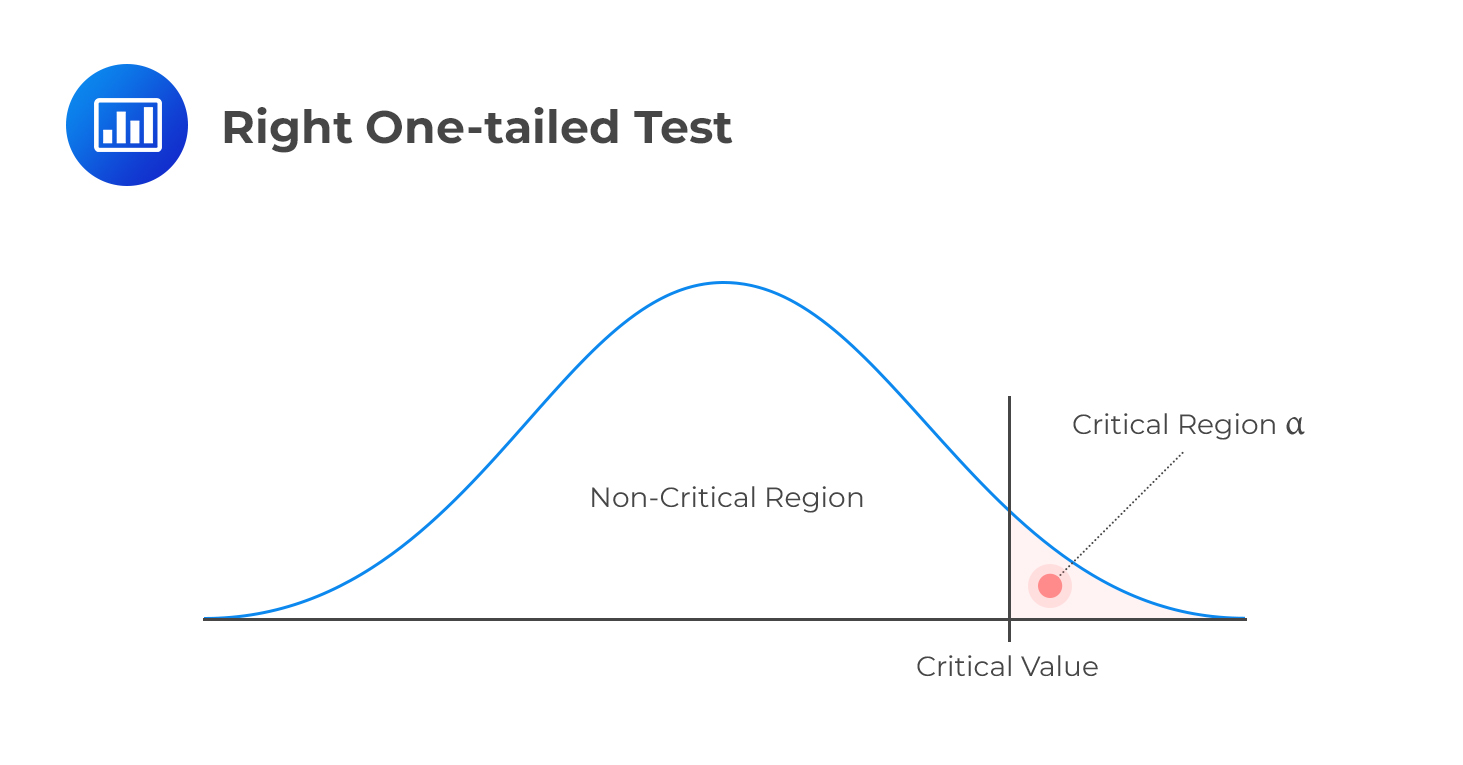 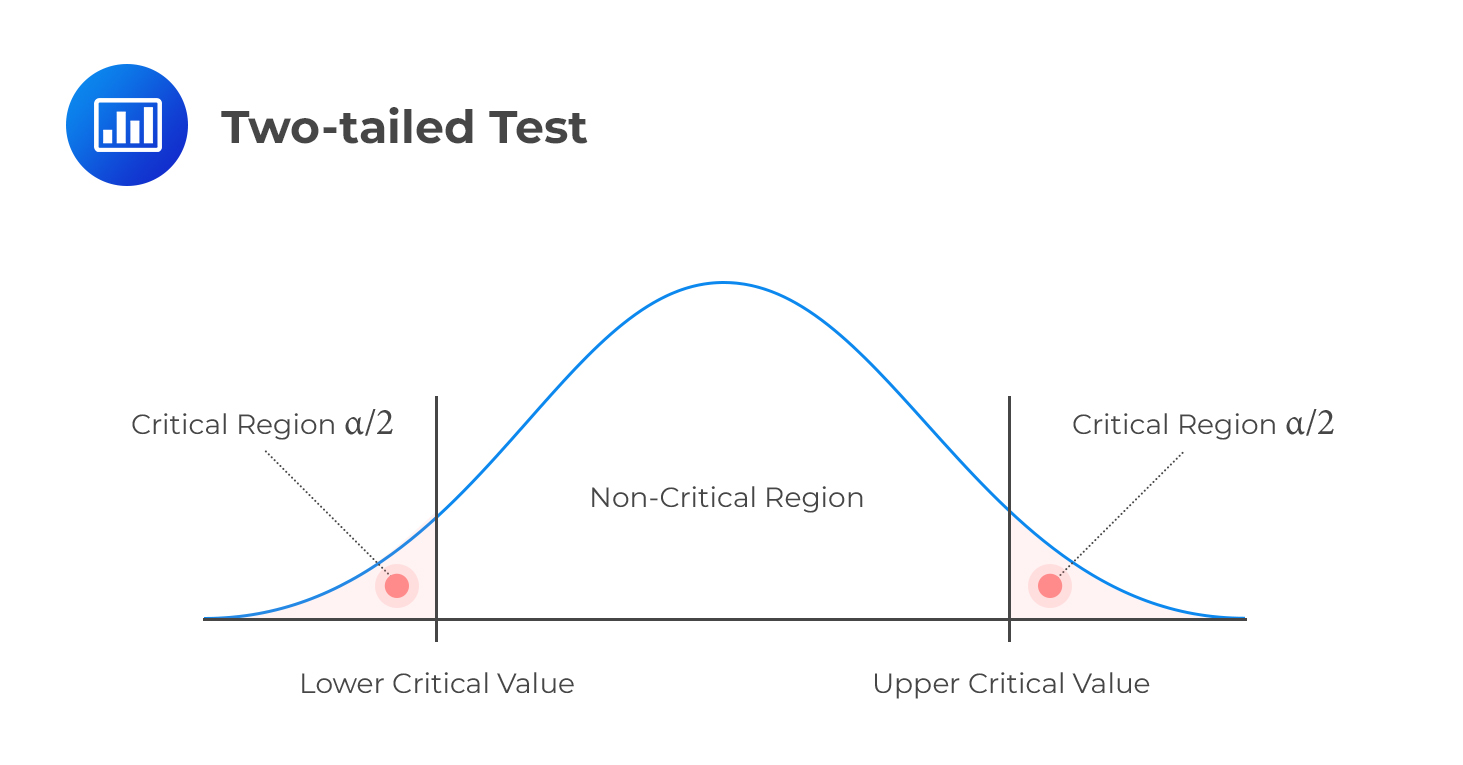 Consider, α=5%. Consider a one-sided test. The rejection regions are shown below: 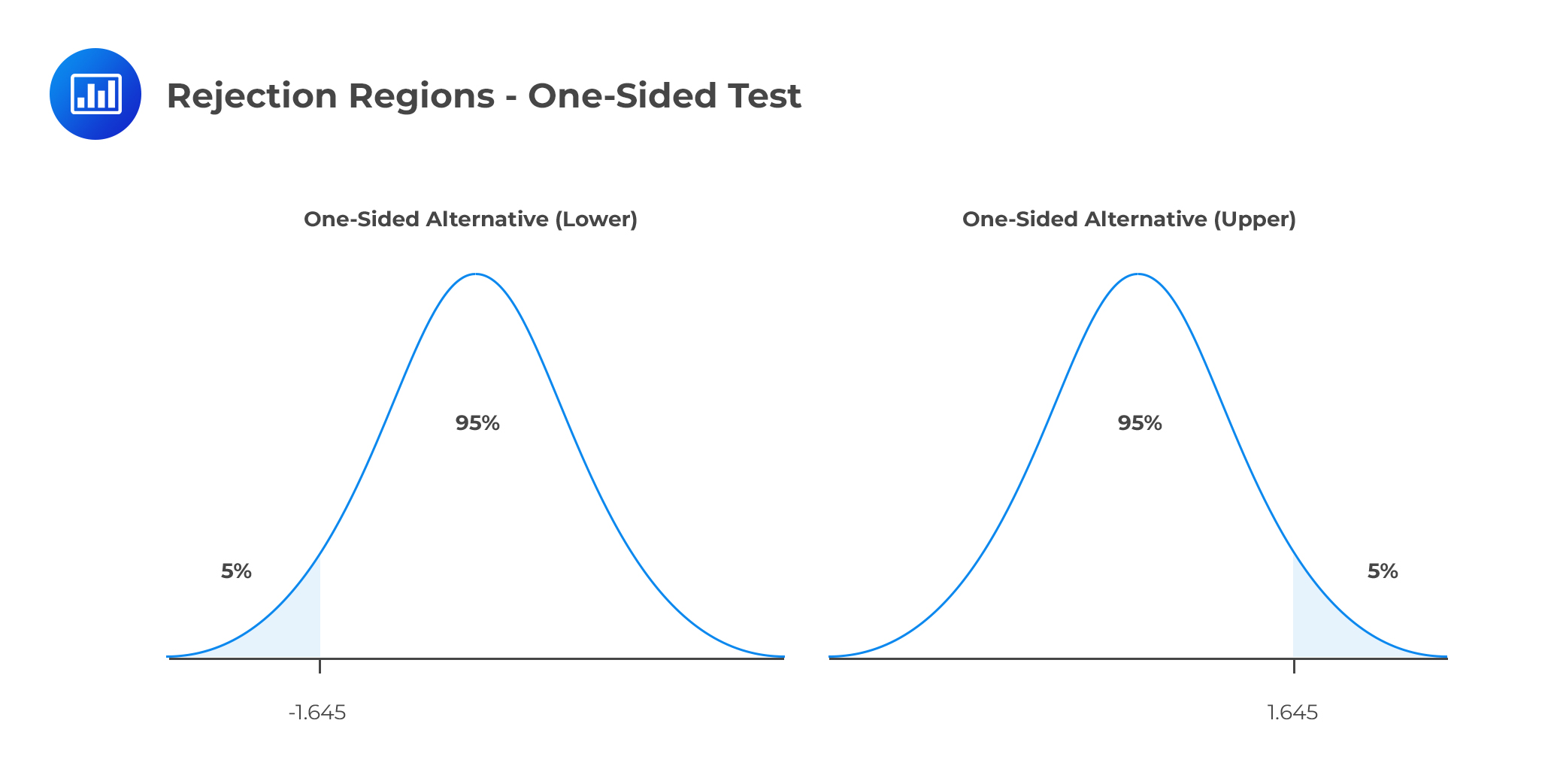 The first graph represents the rejection region when the alternative is one-sided lower. For instance, the hypothesis is stated as:

The second graph represents the rejection region when the alternative is a one-sided upper. The null hypothesis, in this case, is stated as:

Example: Hypothesis Test on the Mean

We start by stating the two-sided hypothesis test:

In this case, we have, 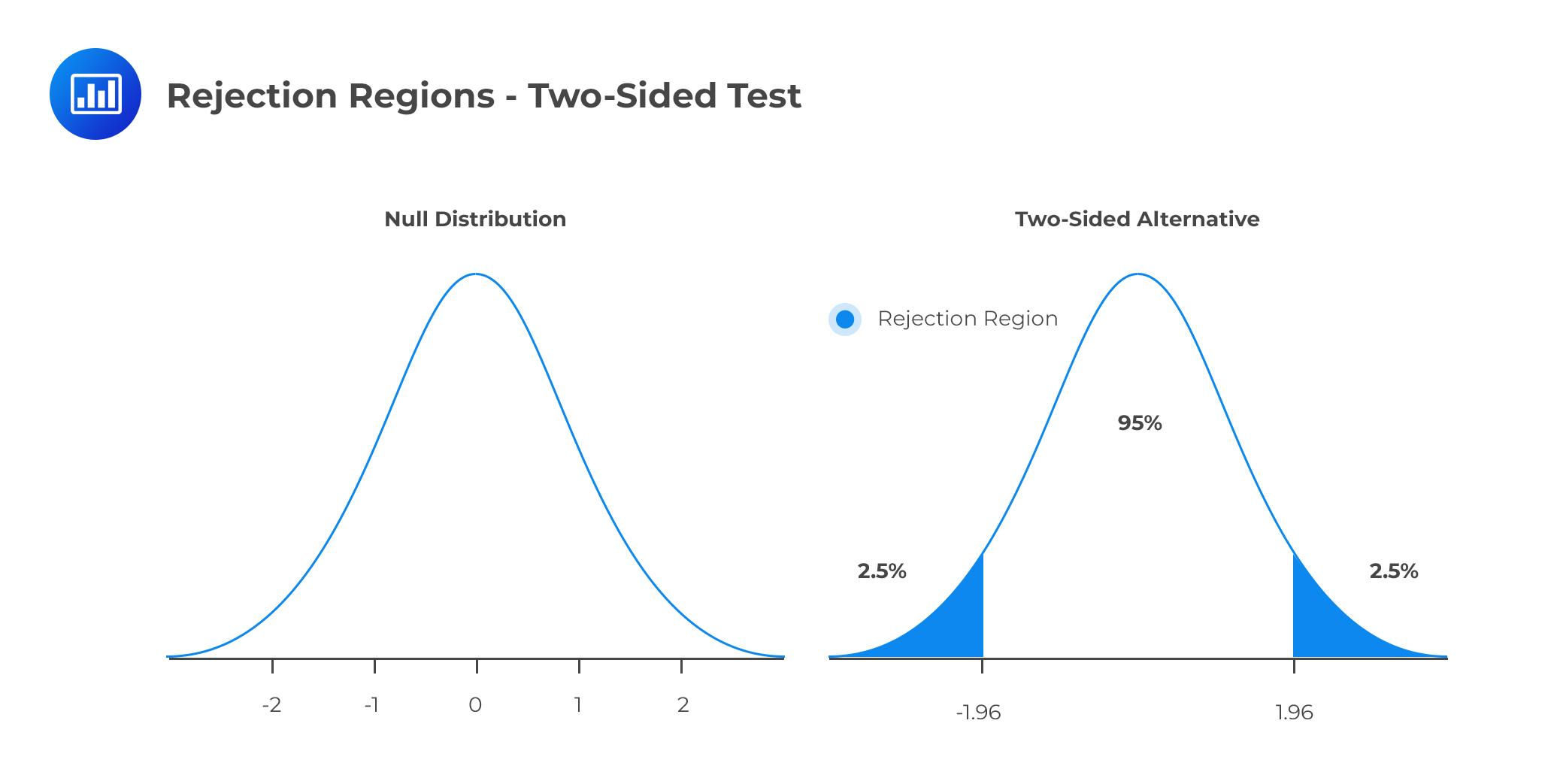 Since the test statistic (2.79) is higher than the critical value, then we reject the null hypothesis in favor of the alternative hypothesis.

The example above is an example of a Z-test (which is mostly emphasized in this chapter and immediately follows from the central limit theorem (CLT)). However, we can use the Student’s t-distribution if the random variables are iid and normally distributed and that the sample size is small (n<30).

In Student’s t-distribution, we used the unbiased estimator of variance. That is:

The Type II Error and the Test Power

The power test measures the likelihood that the false null hypothesis is rejected. It is influenced by the sample size, the length between the hypothesized parameter and the true value, and the size of the test.

It is important to note that the confidence interval depends on the alternative hypothesis statement in the test. Let us start with the two-sided test alternatives.

Then the \(1-α\) confidence interval is given by:

The confidence interval is given by:

Then the \(1-\alpha\) confidence interval is given by:

Thus, the confidence intervals imply any value of the null between 2.23% and 12.77% cannot be rejected against the alternative.

For the one-sided alternative, the confidence interval is given by either:

for the lower alternative

for the upper alternative.

Assume that we were conducting the following one-sided test:

The 95% confidence interval for the portfolio return is:

On the other hand, if the hypothesis test was:

The 95% confidence interval would be:

Note that the critical value decrease from 1.96 to 1.645 due to a change in the direction of the change.

When carrying out a statistical test with a fixed value of the significance level (α), we merely compare the observed test statistic with some critical value. For example, we might “reject H0 using a 5% test” or “reject H0 at 1% significance level”. The problem with this ‘classical’ approach is that it does not give us the details about the strength of the evidence against the null hypothesis.

Determination of the p-value gives statisticians a more informative approach to hypothesis testing. The p-value is the lowest level at which we can reject H0. This means that the strength of the evidence against H0 increases as the p-value becomes smaller. The test-statistic depends on the alternative.

The p-Value for One-Tailed Test Alternative

Where z is a standard normal random variable, the absolute value of T (|T|) ensures that the right tail is measured whether T is negative or positive.

The p-Value for Two-Tailed Test Alternative

Let θ represent the probability of obtaining a head when a coin is tossed. Suppose we toss the coin 200 times, and heads come up in 85 of the trials. Test the following hypothesis at 5% level of significance.

First, not that repeatedly tossing a coin follows a binomial distribution.

Recall that for a binomial distribution, the variance is given by:

(We have applied the Central Limit Theorem by taking the binomial distribution as approx. normal)

Since the probability is less than 0.05, H0 is extremely unlikely, and we actually have strong evidence against H0 that favors H1. Thus, clearly expressing this result, we could say:

Remember, failure to reject H0 does not mean it’s true. It means there’s insufficient evidence to justify rejecting H0, given a certain level of significance.

A CFA candidate conducts a statistical test about the mean value of a random variable X.

She obtains a test statistic of 2.2. Given a 5% significance level, determine and interpret the p-value 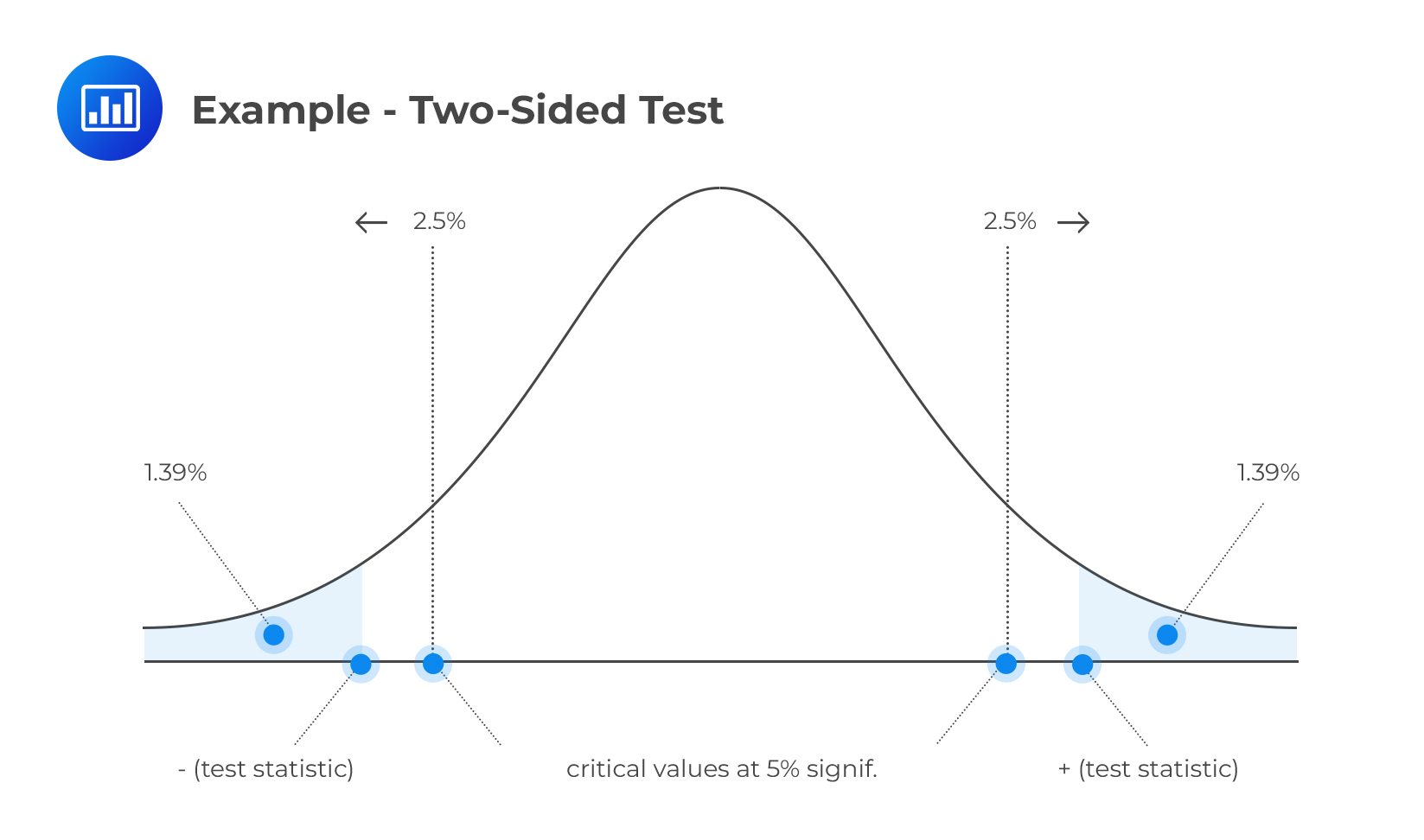 Hypothesis about the Difference between Two Population Means.

Now, suppose that we want to test the hypothesis that:

In other words, we want to test whether the constituent random variables have equal means. Note that the hypothesis statement above can be written as:

To execute this test, consider the variable:

Therefore, considering the above random variable, if the null hypothesis is correct then,

Intuitively, this can be considered as a standard hypothesis test of

The tests statistic is given by:

Note that the test statistic formula accounts for the correction between \(X_i \) and \(Y_i\). It is easy to see that:

Which can be denoted as:

And thus the test statistic formula can be written as:

This formula indicates that correlation plays a crucial role in determining the magnitude of the test statistic.

Another special case of the test-statistic is when \(X_i\), and \(Y_i\) are iid and independent. The test statistic is given by:

The hypothesis statement is given by:

Where ρ_XY  is the correlation coefficient between X and Y.

Now the test statistic is given by:

The test statistic is far much less than -1.96. Therefore the null hypothesis is rejected at a 95% level.

The Problem of Multiple Testing

Multiple testing occurs when multiple multiple hypothesis tests are conducted on the same data set. The reuse of data results in spurious results and unreliable conclusions that do not hold up to scrutiny. The fundamental problem with multiple testing is that the test size (i.e., the probability that a true null is rejected) is only applicable for a single test. However, repeated testing creates test sizes that are much larger than the assumed size of alpha and therefore increases the probability of a Type I error.

Some control methods have been developed to combat multiple testing. These include Bonferroni correction, the False Discovery Rate (FDR), and Familywise Error Rate (FWER).

An experiment was done to find out the number of hours that candidates spend preparing for the FRM part 1 exam. It was discovered that for a sample of 10 students, the following times were spent:

If the sample mean and standard deviation are 312.7 and 7.2, respectively, calculate a symmetrical 95% confidence interval for the mean time a candidate spends preparing for the exam using the t-table.

Population variance is unknown; we must use the t-score.

So the confidence interval is given by:

After completing this reading, you should be able to: Distinguish the key properties... Read More

After completing this reading, you should be able to: Evaluate a bank’s economic... Read More

Applying the CAPM to Performance Measu ...

After completing this reading, you should be able to: Calculate, compare, and evaluate... Read More

After completing this reading you should be able to: Describe the properties of... Read More