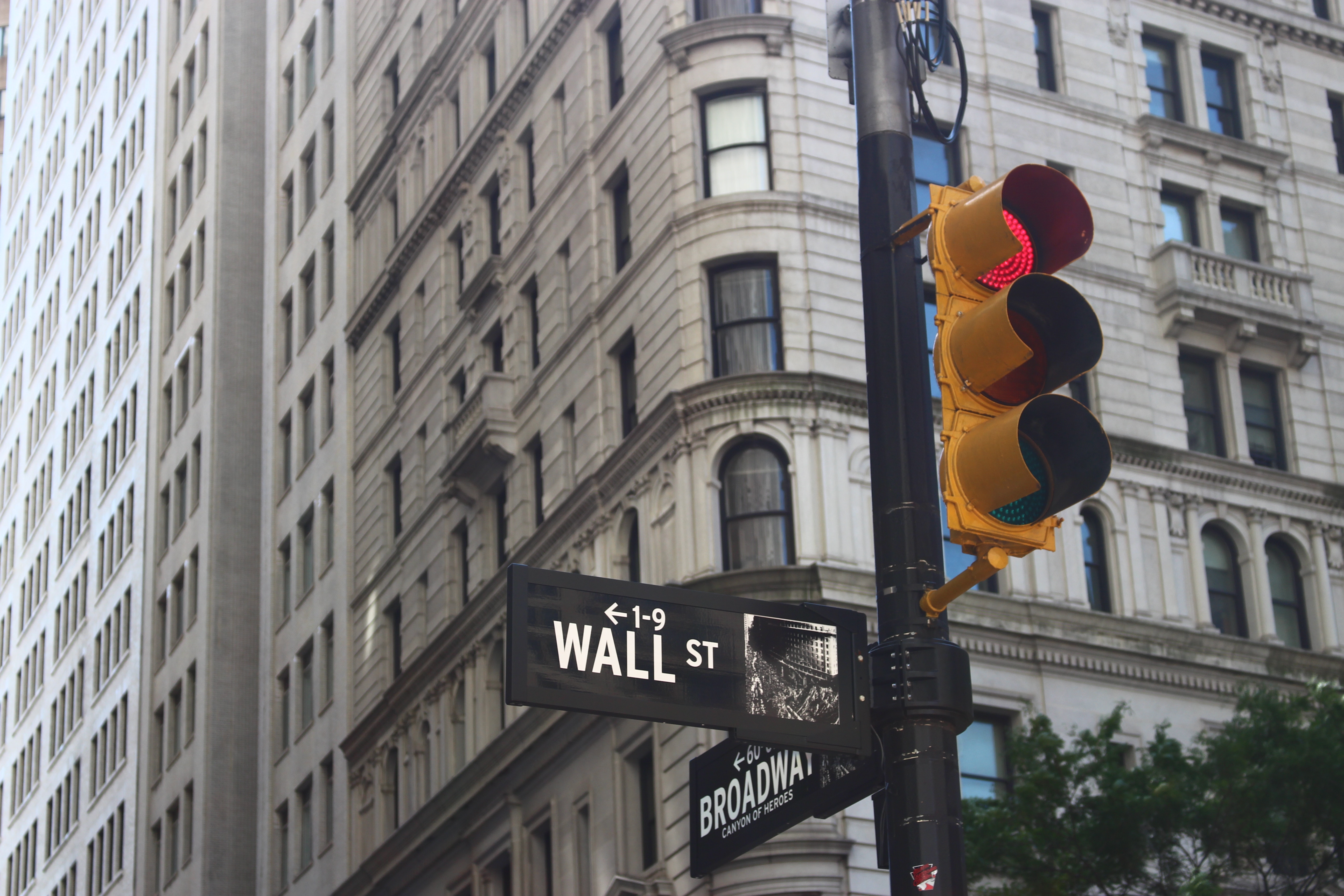 Alpha (and the Low-Risk Anatomy)

The Low-Risk Anomaly of Asset Returns

The empirical evidence has shown that high-beta stocks underperform low-beta stocks on a risk-adjusted basis. This has led to managers following strategies meant to exploit these anomalous patterns. This situation is referred to as low-risk anomaly since it contradicts the capital asset pricing model (CAPM), which suggests that there is a positive relationship between risks and returns and that higher risk, or higher beta, implies higher returns.

Alpha is the average return in excess of a market index or a benchmark. Therefore, a benchmark against which alpha is measured has to be defined.

Alpha is then computed by taking the average of the active returns:

Where \(T\) represents the number of observations in the sample.

Where \(S\) is the sample standard deviation.

The information ratio (IR) is a measure of returns of a portfolio above the returns of a benchmark in comparison to the returns’ volatility. The benchmark is typically an index representing the market or a particular sector. The IR is used as a measure of a portfolio manager’s skills and their ability to generate excess returns relative to the benchmark. It also identifies the consistency of the performance by incorporating a tracking risk component into the calculation.

The information ratio standardizes the returns by dividing the difference in their performances by their tracking risk.

The sharpe ratio is, thus, given by:

Where \(\sigma\) represents the standard deviation of the portfolio.

The Impact of Benchmark Choice on Alpha

Performance is mainly defined using returns and alphas. Lehmann and Modest showed that a benchmark choice could critically impact the estimate of alpha.

Martingale, in his case study, based his low volatility strategy on the Russell 1000 universe of large stocks. Russell 1000, or any other identifiable index, may be a natural choice for a benchmark with an asset beta of 1.0. However, the true beta could be a different value, say 0.73, like in the case of Martingale’s product. Regression on the excess returns of the fund relative to T-bills (risk-free asset) on excess returns of the Russell 1000 was run to obtain:

Rearranging the above equation, we obtain:

The above equation implies that Martingale’s low-volatility strategy outperforms the benchmark by 3.44% per year (alpha of 3.44%).

Suppose that one uses a naive benchmark of Russel 1000, with a beta of 1.0 instead. Then, we have:

So that the alpha is 1.5% per year, which implies a reduced performance of approximately 1.9%. Thus, a different choice of benchmark affects the alpha estimate.

Characteristics of an Effective Benchmark

The following are the features of an ideal benchmark for measuring alpha:

By making bets deviating from a benchmark, a portfolio manager creates alpha in comparison to the benchmark. Successful bets typically imply a higher alpha. In 1989, Richard Grinold formulated the fundamental law of active management, which formalizes this intuition. The fundamental law states that the maximum information ratio attainable is given by:

The information coefficient is simply a measure of how good a manager’s forecasts are, relative to the actual returns. The breadth of the strategy, on the other hand, represents the number of bets taken. Breadth refers to the number of securities that can be traded and the frequency of trading them. In 1999, Grinold and Kahn emphasized the importance of playing often and well. That is, a high BR and a high IC.

The following are the assumptions of Grinold’s fundamental law and its limitations:

In this case, CAPM assumes that the same return as $1 in asset \(i\) can be produced by holding a short position in a risk-free portfolio of $0.60 and an extended position of $1.60 in the market portfolio. Joining risk-free assets and the market obtains the same expected return as the asset when using the CAPM. This implies that the beta of the asset is mimicking portfolio weight and, thus, the CAPM implies a replicating portfolio.

The alpha of an asset \(i\) is any expected return generated in excess of the short $0.60 in the risk-free rate portfolio and the long $1.60 position in the market portfolio:

As observed in the above discussion, factor regressions can be applied in the estimation of the risk-adjusted benchmark, or equivalently the mimicking portfolio.

Where the residuals \(\varepsilon_{\text{it}}\) are independent of the market factor.

A CAPM regression on the above equation was run on the monthly returns on Berkshire Hathaway for the period ranging from January 1990 to May 2012 to yield CAPM-implied mimicking portfolio weights. The estimates are shown in the table below:

This implies that the CAPM benchmark constitutes \(1-51%=49%\) invested in the risk-free asset and \(51%\) invested the market portfolio; that is:

The alpha has a high t-statistic of above two, which shows that it is statistically significant. The cutoff level of two corresponds to the 95% confidence level.

These two factors, HML and SMB, are long-short factors. They mimic portfolios made up of simultaneous $1 long and $1 short positions in different stocks:

This benchmark holds for positions in the SMB and HML factor portfolios alongside a position in the market portfolio like in the traditional CAPM. The following regression is run to estimate the Fama-French benchmark:

The assumption always when running factor regression is that a factor benchmark portfolio can be created.

The estimates for the Fama-French regression for Berkshire Hathaway yields the coefficients shown in the table below:

Berkshire is adding 0.65% (alpha) relative to the above benchmark.

The momentum effect can be added to the factor benchmark. Momentum is a systematic factor observed in most asset classes. A momentum factor, WML (Winning stocks Minus Losing stocks) is added to the Fama-French benchmark:

The estimates for the extended Fama-French regression for Berkshire Hathaway yields the coefficients shown in the table below:

The mimicking portfolio implied by the extended Fama-French benchmark is:

Berkshire is adding 0.68% (alpha) relative to the above benchmark when adding the momentum factor.

Using the monthly data from January 2001 to December 2011, the following information is obtained by the extended Fama-French factor regressions using constant factor weights:

Fidelity Magellan is the only alpha that is statistically significant at \(-0.27\%×12=-3.24\%\) per year. We can thus conclude that Fidelity is not ‘adding alpha.’ Berkshire Hathaway’s alpha, on the other hand, is positive but insignificant. This is different from the alpha obtained earlier, from the data of the period starting from 1990. It is not easy to detect the statistical significance of outperformance.

The following two potential shortcomings of our analysis can be rectified by style analysis:

The following are the issues that may arise when measuring the alpha for nonlinear strategies:

Empirical evidence has shown that a low-volatility stock earns higher risk-adjusted returns relative to the market portfolio, even after controlling for effects such as value and size. Using measures of market beta or volatility to sort stocks has provided proof of this anomaly. For instance, Friend and Blume (1970) used the stock portfolio returns in the period 1960 through 1968 with market beta and volatility risk measures. They showed an inverse relationship between returns and risk. Haugen and Heins (1975) used data from 1926 through 1971 to investigate the relation between market beta, volatility risk measures, and returns. They also came to a similar conclusion. In 2006, Andrew Ang et al. revived this study and found that the returns of high-volatility stocks had approximately zero average returns and that low-volatility stocks outperformed the high-volatility stocks. 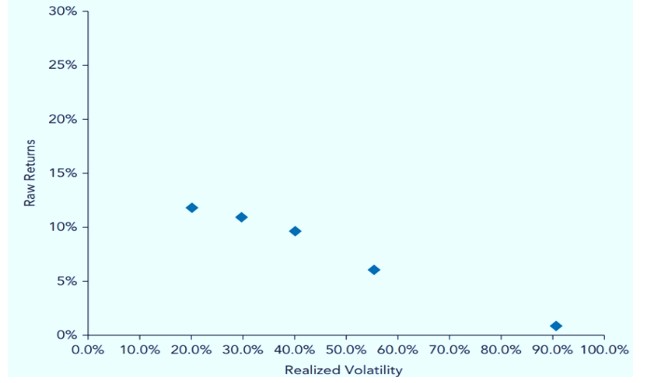 CAPM was first tested in the 1970s. These tests showed a positive relationship between beta and expected returns. It does not, however, imply that lagged betas lead to higher returns. The CAPM states that beta and expected returns have a contemporaneous relation. In particular, it predicts that stocks with higher betas will have higher average returns over the periods in which the betas and returns are measured.

Black, Jensen, and Scholes (1972), for example, found a positive relation between beta and returns, but they described it as being “too flat” relative to the CAPM predictions. Fama and French (1992), on the other hand, showed that beta and average returns had a statistically insignificant relationship. They showed that the point estimates indicated that the relation between beta and returns was negative.

Reasons for the Risk Anomaly

The following are some of the possible explanations for the risk anomaly:

The low-risk effect has been witnessed in various contexts. As shown by Ang et al., the appearance of the effect is during recessions, expansions, periods of stability, and periods of volatility.

Since most investors wish to take on more risk but are unable to take on leverage, they become leverage constrained. They hold stocks that have built-in leverage since they cannot borrow. The bidding up of the high-beta stock’s price by investors goes on until the shares are overpriced and have low returns.

Unconstrained investors prefer buying low and selling high. For instance, they buy stocks with a positive alpha, which offers a high return, and sell stocks with negative or low alpha, whose return is too low. In a perfect market, these investors would bid up the price of the first stock until it no longer has any excess returns, while at the same time, selling the other until its returns reach a reasonable level. The risk anomaly automatically disappears. However, the market is not always perfect.

Asset owners may bid up certain stocks for which they have a preference due to their high volatility and high beta until their returns are lower. On the other hand, safe stocks may be shunned by these investors due to their low volatilities and low betas. This leads to lower prices and, hence, higher returns of these stocks.

Barbara Flemings is a retail investor who expects her stock portfolio to return 11% in the following year. If the portfolio carries a standard deviation of 0.07, and the returns on risk-free Treasury notes are 3%, then which of the following is closest to the Sharpe ratio of Flemings’ portfolio?

Recall that the Sharpe ratio is given as:

This means that for every point of return, Flemings is shouldering 1.14 “units” of risk.

The Science of Term Structure Models

After completing this reading, the candidate should be able to: Explain the elements... Read More

After completing this reading, the candidate should be able to: Explain best practices... Read More

After completing this reading you should be able to: Describe the seven Basel... Read More