Model specification is a process of determining which independent variables should be included in or excluded from a regression model.

That is, an ideal regression model should consist of all the variables that explain the dependent variables and remove those that do not.

Model specification includes the residual diagnostics and the statistical tests on the assumptions of OLS estimators. Basically, the choice of variables to be included in a model depends on the bias-variance tradeoff. For instance, large models that include the relevant number of variables are likely to have unbiased coefficients. On the other side, smaller models lead to accurate estimates of the impact of removing some variables.

The conventional specification makes sure that the functional form of the model is adequate, the parameters are constant, and the homoscedasticity assumption is met.

An omitted variable is one with a non-zero coefficient, but they are excluded in the regression model.

Illustration of the Omitted Variables

Suppose that the regression model is stated as:

An extraneous variable is one that is unnecessarily included in the model, whose actual coefficient is 0 and is consistently estimated to be 0 in large samples. If we include these variables is costly.

Illustration of Effect of Inclusion of Extraneous Random Variables

Contrastingly, this is not always the case when the true coefficient is equal to 0 because, in this case, RSS remains constant as \(\xi\) increases leading to a smaller \({{\bar {\text R}}^2}\) and a large standard error.

Methods of Choosing a Model from a Set of Independent Variables

Recall that homoskedasticity is one of the critical assumptions in the determination of the distribution of the OLS estimator. That is, the variance of \(\epsilon_i\) is constant and that it does not vary with any of the independent variables; formally stated as \(\text{Var}(\epsilon_i│{\text X}_{1{\text i}},{\text X}_{2{\text i}},…,{\text X}_{k{\text i}} )=\delta^2\). Heteroskedasticity is a systematic pattern in the residuals where the variances of the residuals are not constant. 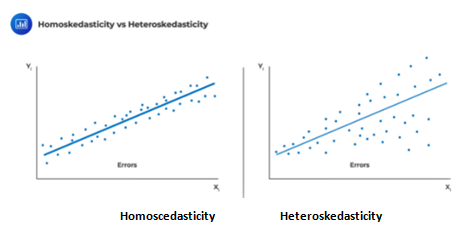 The first step is to calculate the residuals by utilizing the OLS parameter estimators:

For instance, if the number of the explanatory variables is two, k=2, then the test statistic has a distribution of \(\chi_5^{2}\).

The three common methods of handling data with heteroskedastic shocks include: 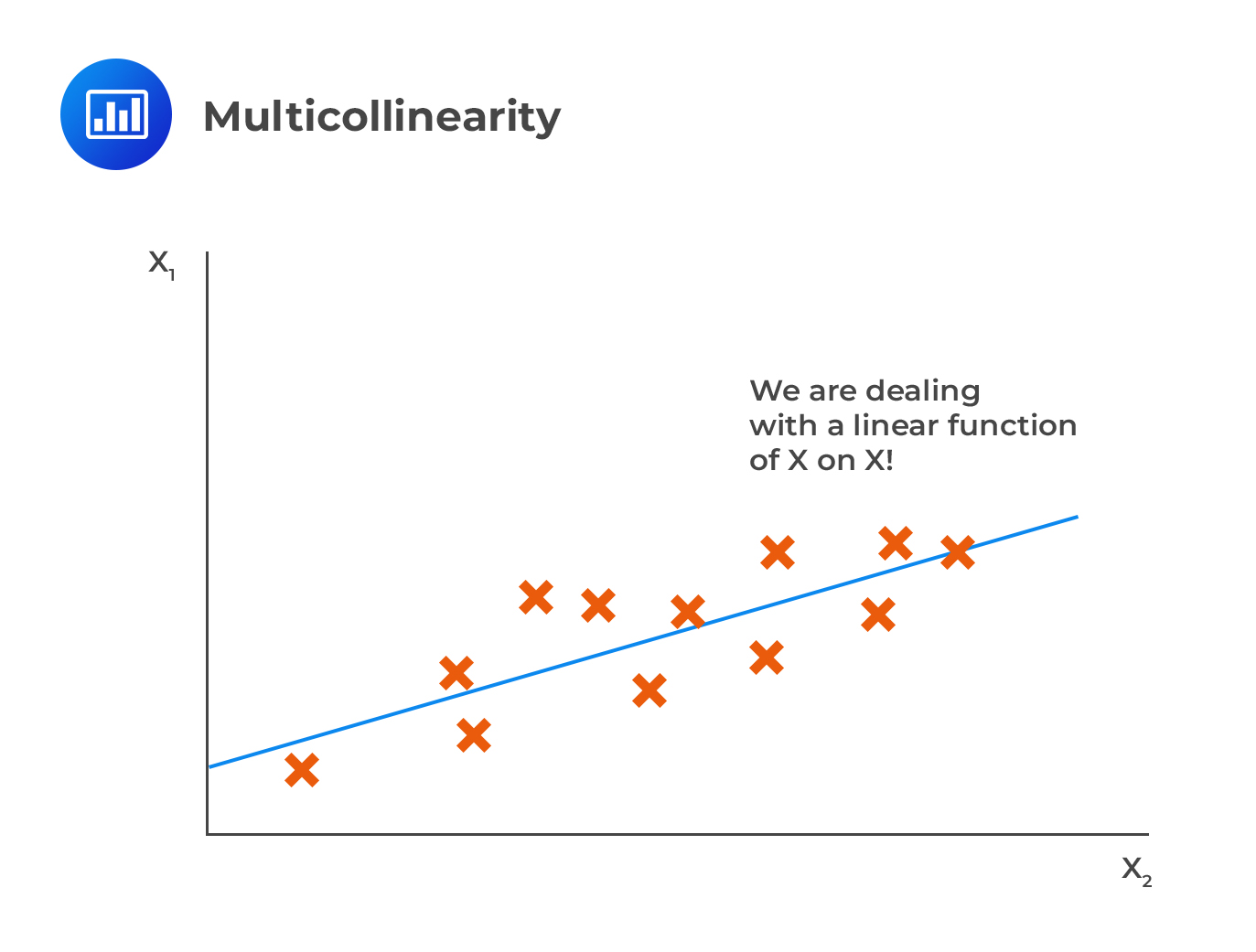 In contrast with multicollinearity, perfect correlation is where one of the variables is perfectly correlated to others such that the \({\text R}^2\) of regression of \({\text X}_{\text j}\) on the remaining independent variable is precisely 1.

Conventionally, when \({\text R}^2\) is above 90% leads to problems in medium sample sizes such as that of 100. Multicollinearity does not pose an issue in parameter approximation, but rather, it brings some difficulties in modeling the data.

There are two ways of dealing with multicollinearity:

Residual plots are utilized to identify the deficiencies in a model specification. When the residual plots are not systematically related to any of the included independent (explanatory variables) and relatively small (within \(\pm\)4s, where s, is the standard shock deviation of the model) in magnitude, then the model is ideally good.

Outliers are values that, if removed from the sample, produce large changes in the estimated coefficients. They can also be viewed as data points that deviate significantly from the normal objects as if they were generated by a different mechanism. 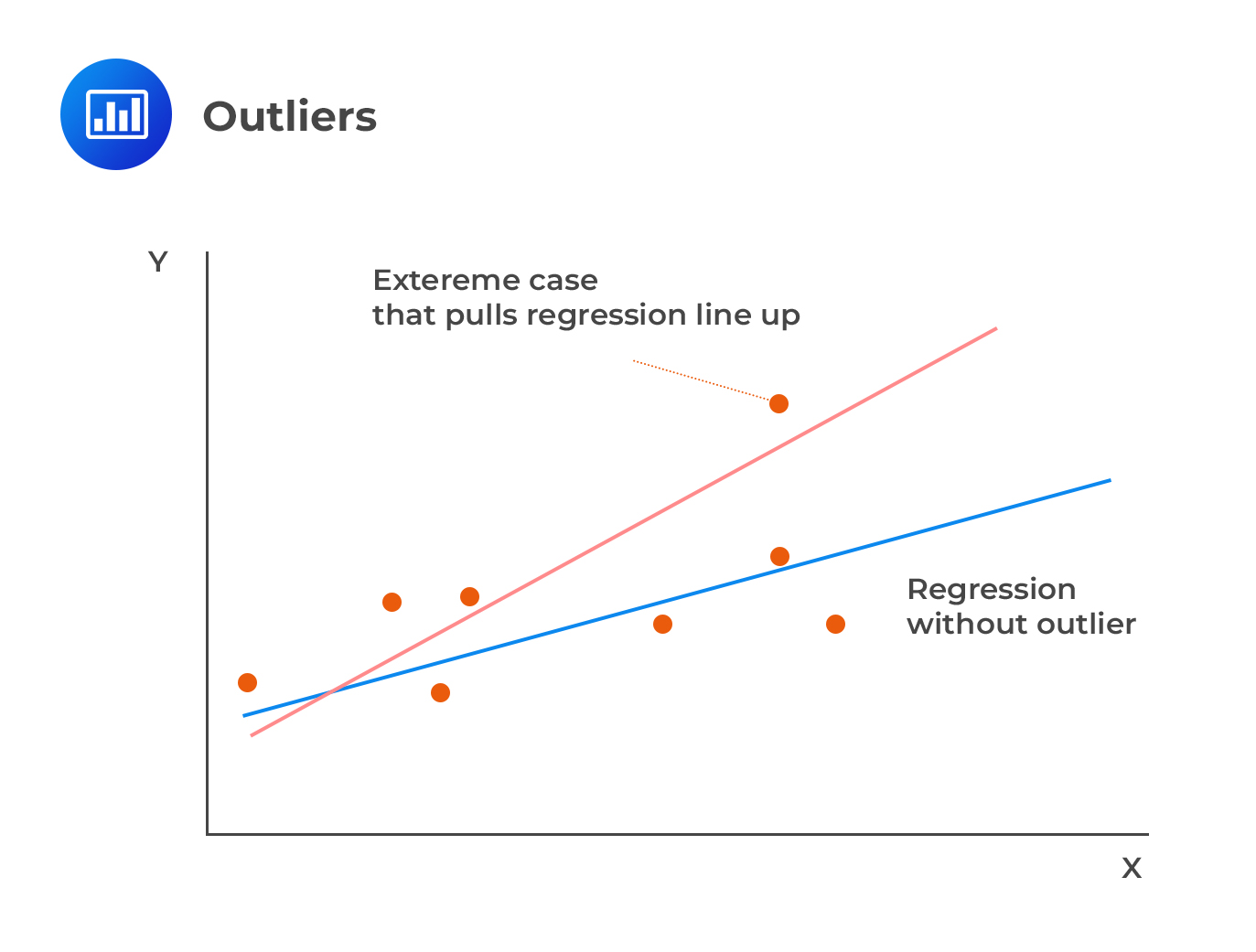 Cook’s distance helps us measure the impact of dropping a single observation j on a regression (and the line of best fit).

The Cook’s distance is given by:

k=number of coefficients in the regression model

If you look at the data sets above, it is easy to see that observation 15 is quite more significant than the rest of the observations, and there is a possibility to be an outlier. However, we need to ascertain this.

We begin by fitting the whole dataset (\({{\bar {\text Y}}_{\text i}}\)) and then the 14 observations which remain after excluding the dataset that we believe is an outlier.

If we fit the whole dataset, we get the following regression equation:

And if we exclude the observation that we believe it is an outlier we get:

Now the fitted values are as shown below:

OLS  is the Best Linear Unbiased Estimator (BLUE) when some key assumptions are met, which implies that it can assume the smallest possible variance among any given estimator that is linear and unbiased:

However, being a BLUE estimator comes with the following limitations:

When the residuals and iid and normally distributed with a mean of 0 and variance of \(\sigma^2\), formally stated as \(\epsilon_{i} \sim^{iid} {\text N}(0,\sigma^2)\) makes the upgrades BLUE to BUE (Best Unbiased Estimator) by virtue having the smallest variance among all linear and non-linear estimators. However, errors being normally distributed is not a requirement for accurate estimates of the model coefficients or a necessity for desirable properties of estimators.

Which of the following statements is/are correct?

I. Homoskedasticity means that the variance of the error terms is constant for all independent variables.

II. Heteroskedasticity means that the variance of error terms varies over the sample.

III. The presence of conditional heteroskedasticity reduces the standard error.

C. All statements are correct

D. None of the statements are correct

All statements are correct

A financial analyst fails to include a variable which inherently has a non-zero coefficient in his regression analysis. Moreover, the ignored variable is highly correlated with the remaining variables.

What is the most likely deficiency of the analyst’s model?

B. Bias due to inclusion of extraneous variables.

D. None of the above.

I. A variable with a non-zero coefficient is omitted

II. A variable that is omitted is correlated with remaining (included) variables.

These conditions are met in the description of the analyst’s model.

Option B is incorrect since an extraneous variable is one that is unnecessarily included in the model, whose true coefficient and consistently approximated value is 0 in large sample sizes.

Option C is incorrect because heteroskedasticity is a condition where the variance of the errors varies systematically with the independent variables of the model.

By the end of this reading, you should be able to: Describe the... Read More

The Rise of Digital Money

After completing this reading, you should be able to: Describe and compare different... Read More

After completing this reading, you should be able to: Define cyber risk and... Read More