The parametric method is also called the variance-covariance method. This method looks at the price changes of an investment over a lookback period and computes a portfolio’s maximum loss using probability theory. It uses the standard deviation and the mean of the price returns of an asset as the parameters. The maximum loss within a specific confidence level is calculated, assuming asset price returns and volatility follow a normal distribution.

The variance-covariance method is the most common way of estimating VaR. It owes its popularity to the fact that it only requires the mean and standard deviation of the portfolio to perform the calculations. The assumption that the returns of portfolios are normally distributed allows the manager to use the calculated standard deviation to obtain a standard normal z score. The z score uses a standard normal table to determine the risk position with a degree of confidence. 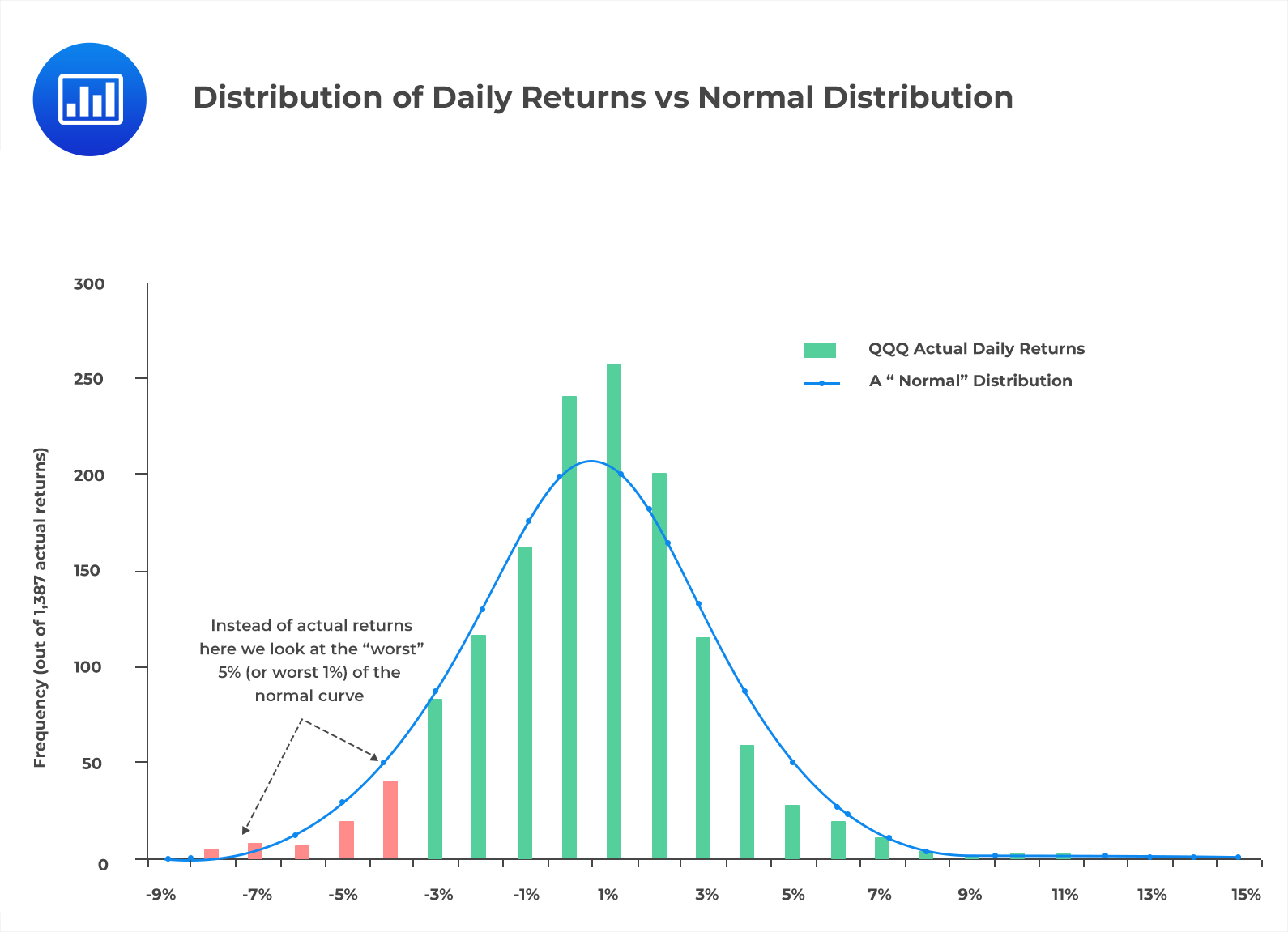 Unlike the historical simulation method, which will be discussed later, where we use actual data, we use the familiar curve under the parametric method. The parametric method makes it easy to automatically know where the worst 5% and 1% lie on the normal curve.

The historical simulation method assumes that the past performance of a portfolio is a good indicator of its performance in the near future. This method reorganizes actual historical returns by ranking them from the worst to the best. It assumes the recurrence of the trend, from a risk perspective.

Unlike the other two methods, the historical simulation method does not need any distributional assumption to estimate VaR.

Consider the following histogram that represents the distribution of daily returns: 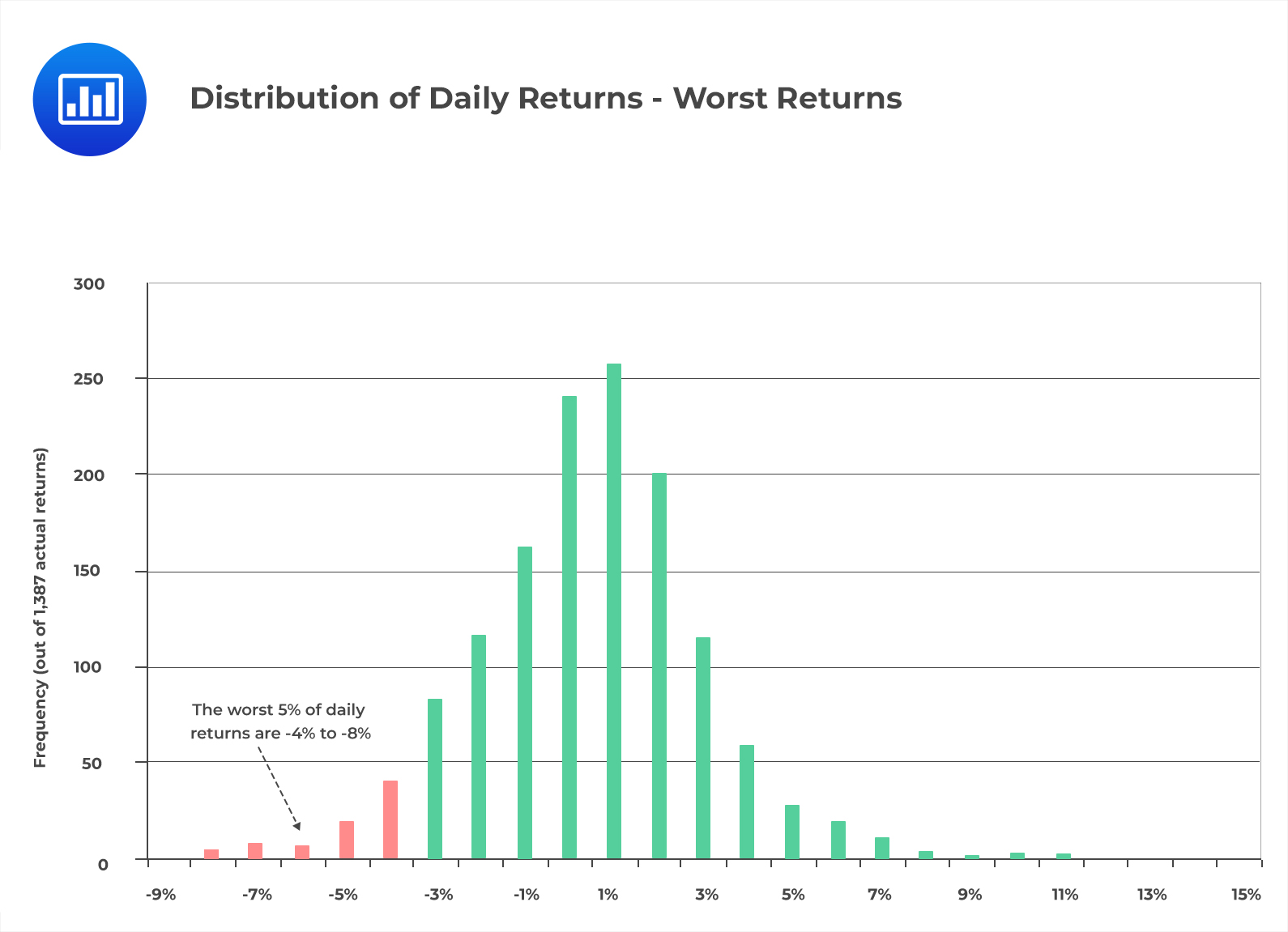 Notice that since returns are arranged from left to right, the worst returns are always on the left tail. We can deduce, therefore, that we are 95% confident that the expected worst daily loss will be 4%, at most.

This procedure is repeated numerous times. The nth percentile estimates the n% VaR. The sample used and the distribution assumptions of the risk factors significantly affect the VaR estimate. With a large sample size, the Monte Carlo method produces the same results as the parametric method, provided the specified distribution and the parameters used are the same. 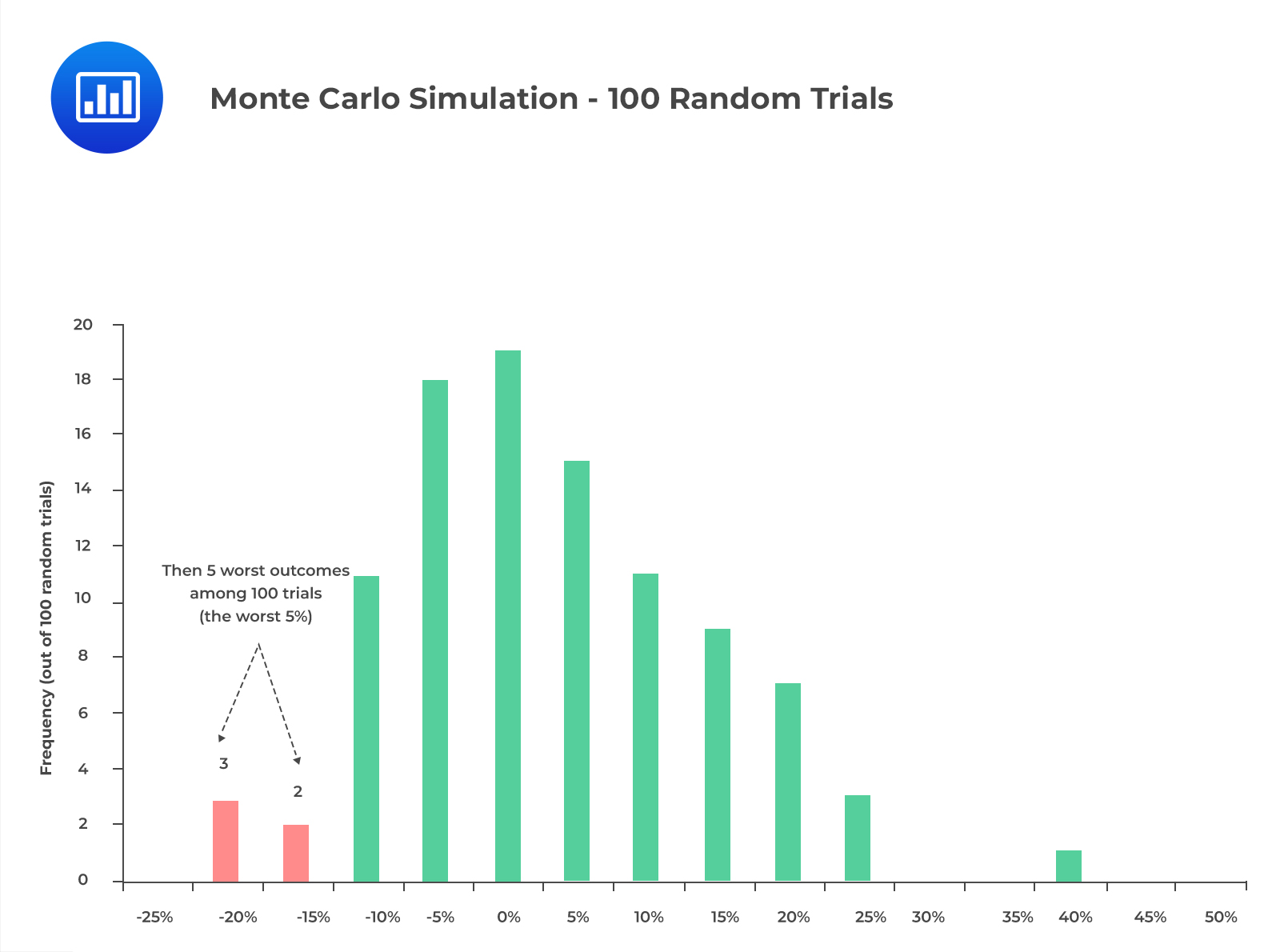 From the above histogram, we can conclude that we are 95% confident that the expected monthly loss will be 15%, at most.

Which of the following statements is least likely true about the historical simulation method of estimating VaR?

Unlike the Monte Carlo and parametric methods, the historical simulation method does not need any distributional assumptions to estimate VaR. This is because Monte Carlo uses historical data to perform the estimation.

A is incorrect. Historical simulation method’s VaR estimates depend on the lookback period and, therefore, forecasts are highly dependent on the features of the sample data. This is the major drawback of the method.

B is incorrect. The historical simulation method assumes that the past performance of a portfolio is a good indicator of its performance in the near future. It involves reorganization of actual historical returns by putting them in order (from the worst to the best) and the assumption that the trend will repeat itself, from a risk perspective.

Comparison between IFRS 17 and US GAAP

Fair Value Option A fair value option is an option to recognize an... Read More

The Weighted Average Cost of Capital

A company’s cost of capital is the overall required rate of return of... Read More

Historical scenario analysis is a form of backtesting that examines the risk and... Read More