Penalized regression is a technique that is useful for reducing/shrinking a large number of features to a manageable set and for making good predictions in a variety of large data sets. It is used to avoid overfitting. Models in which each variable plays an essential role tend to work well in prediction because they are less subject to overfitting.

The penalized regression allows us to create a linear regression model that is penalized for having too many variables in the model by adding a constraint in the equation. This is through shrinkage or regularization methods.

An excellent example of penalized regression is LASSO regression.

LASSO (least absolute shrinkage and selection operator) contracts the regression coefficients toward zero. The shrinking is done by penalizing the regression model with a penalty term, known as the L1 norm, which is the sum of the absolute coefficients.

LASSO also involves minimizing the sum of the absolute values of the regression coefficients as in the following expression:

When \(\lambda=0\), the penalty term reduces to zero, so there is no regularization, and the regression is equivalent to an ordinary least squares (OLS) regression.

The higher the number of variables with non-zero coefficients, the larger the penalty term. Penalized regression, therefore, ensures that a feature is included if the sum of squared residuals declines by more than the penalty term increases. Additionally, LASSO automatically performs feature selection since it eliminates the least essential features from the model.

Lambda is the tuning parameter that decides how much we want to penalize the flexibility of our model. As the value of \(\lambda\) rises, the value of coefficients reduces and thus reducing the variance, consequently avoiding overfitting.

Regularization refers to methods that reduce statistical variability in big dimensional data estimation problems. In this case, reducing regression coefficient estimates toward zero and thereby avoiding complex models and the risk of overfitting.

Starting with a set of training examples that belong to two specified categories, an SVM model can assign new examples to each category. In essence, the model can “train”  and subsequently predict where a new set of examples belong. The SVM model works by establishing a hyperplane between the two categories that is wide as possible to simplify the prediction process. The model assumes that the data is linearly separable. 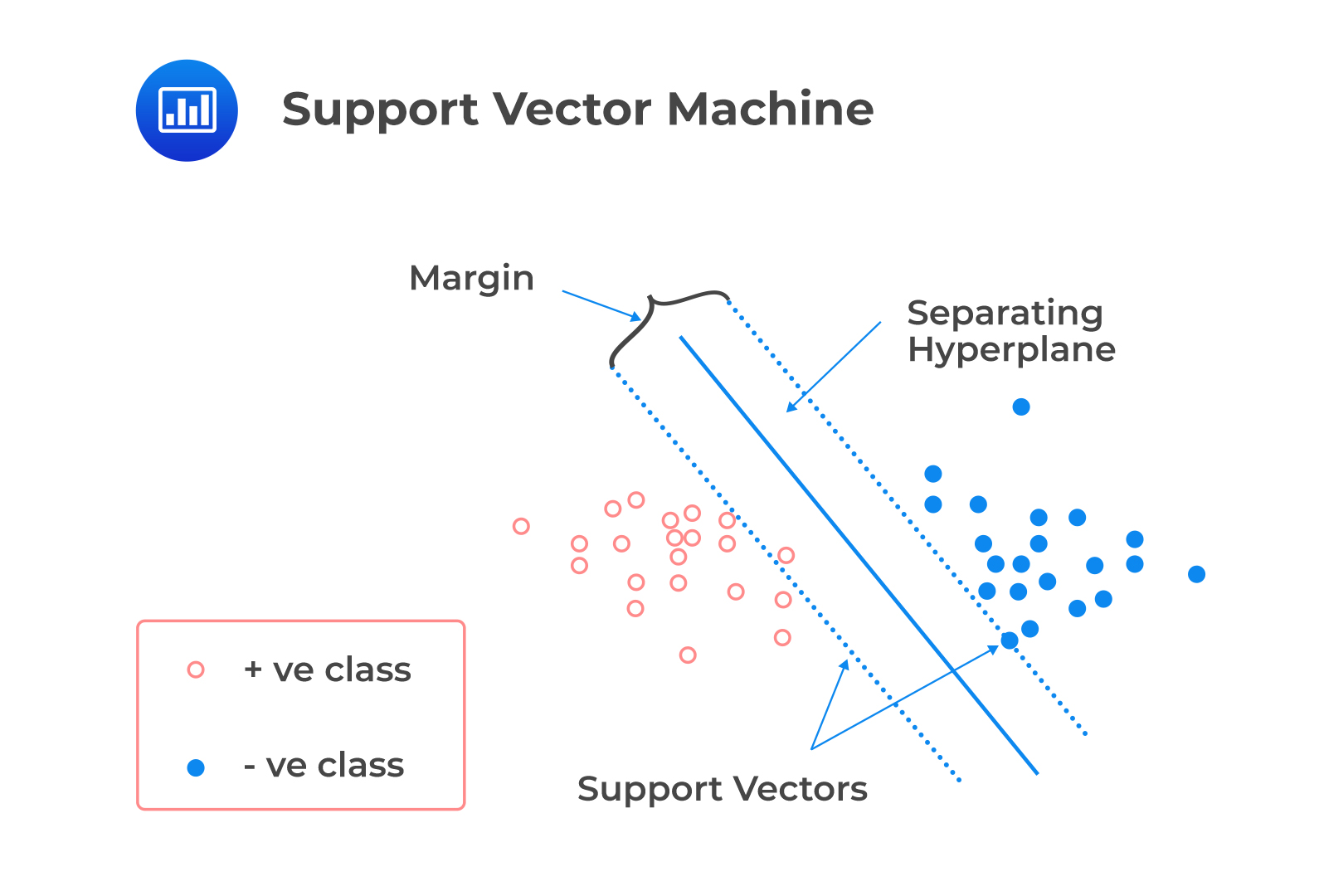 SVM can be applied to corporate financial statements or bankruptcy databases as they are complex high-dimensional data sets. It is essential to note that training the SVM algorithm is time-consuming, and the algorithm structure is challenging to understand.

K-nearest neighbor (KNN) is an algorithm used for classification and regression. The idea is to classify a new observation by finding similarities (“nearness”) between it and its k-nearest neighbors in the existing data set. 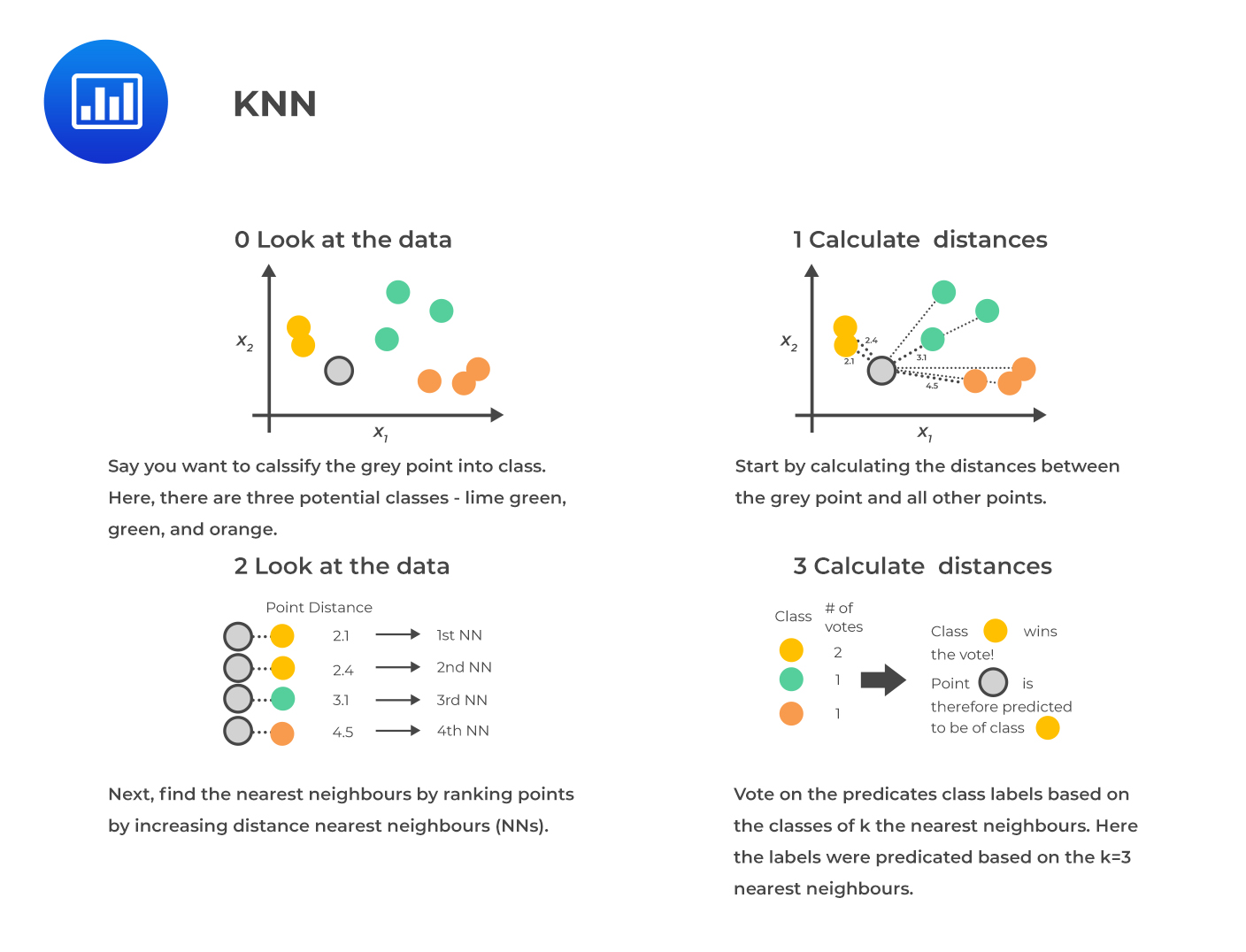 KNN is a straightforward, intuitive model that is still very powerful because it is non-parametric; the model makes no assumptions concerning the distribution of the data. Further, it can be employed for multiclass classification.

The main challenge facing KNN is the definition of “near.” Additionally, an important decision relates to the distance metric used to model nearness because an inappropriate measure generates poorly performing models. More subjectivity may arise depending on the correct choice of the correct distance measure. KNN can be applied in the investment industry, including bankruptcy prediction, stock price prediction, corporate bond credit rating assignment, and customized equity and bond index creation.

Classification and Regression Tree (CART), also known as a decision tree, is most commonly applied to binary classification or regression. Items are classified by asking a series of questions that home in on the most likely classification. It is essential to avoid overfitting by applying a stopping criterion or by pruning the decision tree. At each node, the algorithm chooses the feature and the cutoff value for the selected feature that generates the most extensive separation of the labeled data to minimize classification error.

Suppose we want to predict if a stock is an attractive investment or a value trap, i.e., an investment that is likely to be unprofitable but cheaply priced. High profitability is only relevant if the stock is cheap. For example, in this hypothetical case, if P/E is less than 20, leverage is high (debt to total capital > 50%), and sales are expanding (sales growth > 20%). Multiple linear regression fails typically in situations where the relationship between the features and the outcome is non-linear.

The decision tree to determine if the investment is attractive or a value trap is as follows: 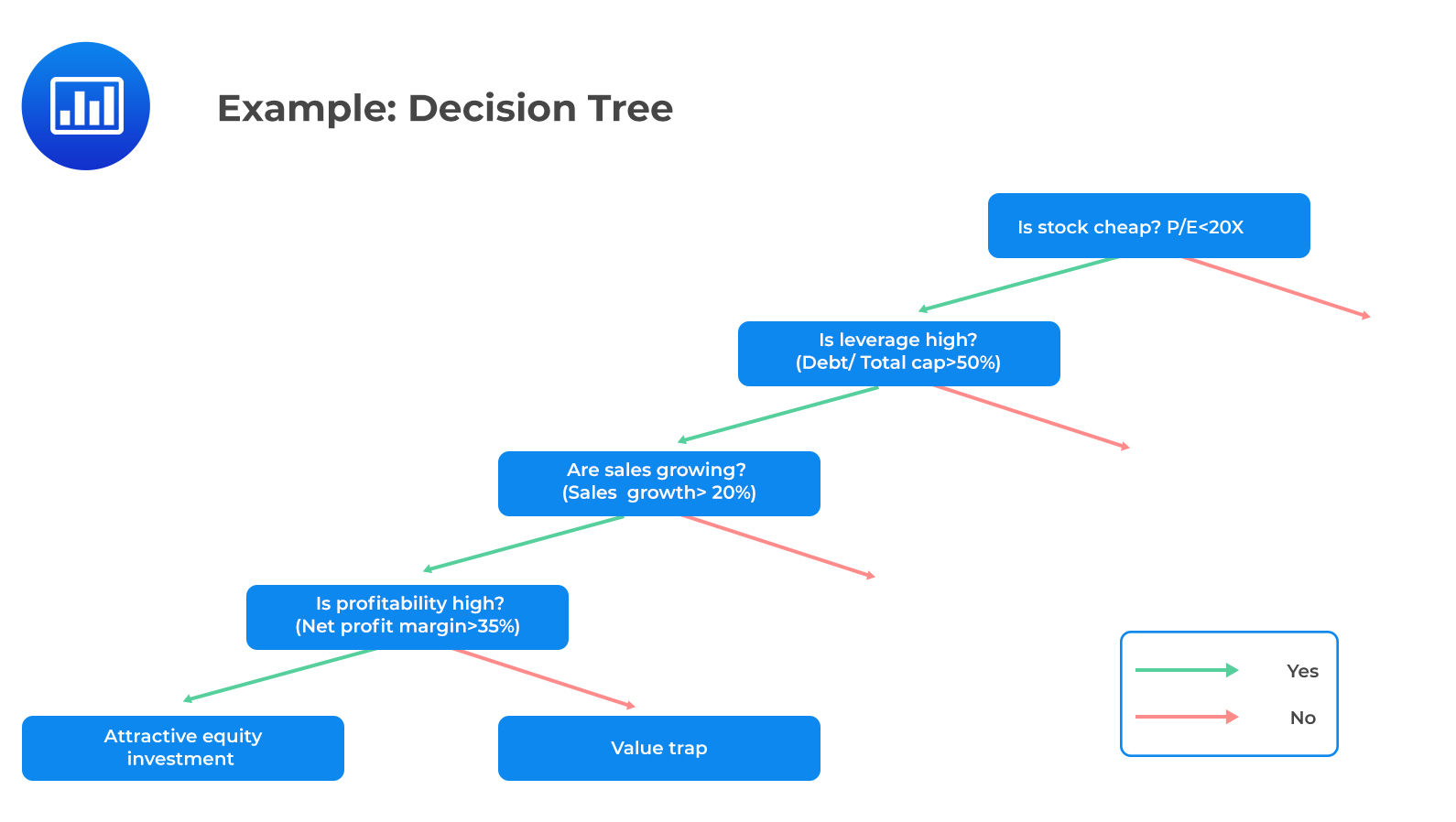 The tree in the CART provides a visual explanation for prediction. Moreover, it is a powerful tool to build expert systems for decision-making processes. It can induce robust rules despite noisy data and complex relationships between high numbers of features.

CART can be applied in enhancing fraud detection in financial statements, generating consistent decision processes in equity and fixed-income selection, and simplifying the communication of investment strategies to clients.

Ensemble learning can be divided into two main categories:

Voting works by first creating two or more individual ML models from your training data set. A voting classifier is then used to combine results of the models and average predictions of the sub-models when tasked to make predictions for new data. A majority-vote classifier can also be used to assign to a new data point the predicted label with the most votes.

It is crucial to look for diversity in the choice of algorithms, modeling techniques, and hypotheses to mitigate the risk of overfitting.

Bootstrap aggregation, also known as bagging, involves taking multiple samples from the training dataset with replacement and training the algorithm. The final output prediction is obtained by aggregating the n predictions using a majority-vote classifier for classification or an average for a regression. Bagging improves the stability of predictions and protects against overfitting the model.

Random forest, like its name suggests, comprises of a large number of individual decision trees that operate as an ensemble. Training dataset samples are taken with replacement, but the trees are constructed in a way that reduces the correlation between individual classifiers. The fundamental concept here is that a large number of arguably uncorrelated models or trees operating as a group outperform any of the individual constituent models.

A simple illustration of random forest is as follows: 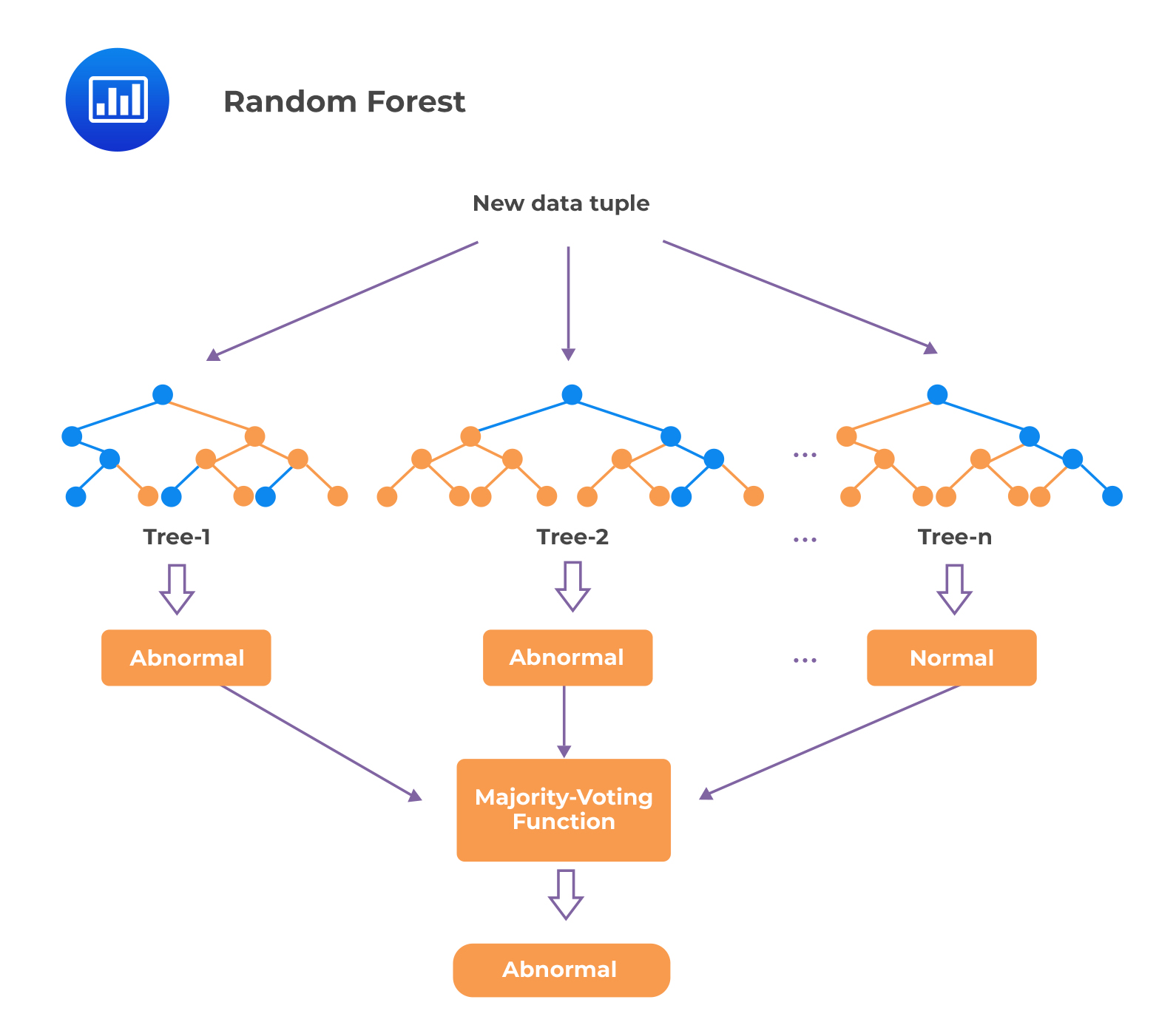 The process involved in random forest reduces the risk of overfitting on the training data. It also reduces the ratio of noise to signal because errors cancel out across the collection of slightly different classification trees. However, a significant drawback of random forest is that it lacks the ease of interpretability of individual trees; as a result, it is considered a relatively black box-type algorithm.

Random forest is a robust algorithm that can be applied in many investment aspects. For example, use in factor-based investment strategies for asset allocation and investment selection.

An investment analyst wants to employ ML techniques to upgrade the way she selects her stock investments. She decides to employ machine learning to divide her investable universe of 2,000 stocks into 8 different groups, based on a wide variety of the most relevant financial and non-financial characteristics. The aim is to mitigate unintended portfolio concentration by selecting stocks from each of these distinct groups.

Assuming she utilizes regularization in the ML technique, which of the following ML models is least likely appropriate?

A. Regression tree with pruning

Recall that with LASSO, λ is the penalty term. When the penalty term reduces to zero, there is no regularization, and the regression resembles an ordinary least squares (OLS) regression. Therefore, LASSO with λ equal to 0 will be the least appropriate.

A is incorrect. One way of regularization in a decision tree or CART is through pruning. Pruning reduces the size of the regression tree—sections that provide little explanatory power are eliminated or pruned.

C is incorrect. LASSO with λ between 0.5 and implies a reasonably significant penalty term. It, therefore, requires that a feature makes an adequate contribution to model fit to offset the penalty from including it in the model.

Overfitting and Methods of Addressing it

The Predicted Value of a Dependent Va ...

The Predicted Value of the Dependent Variable The following steps are followed to... Read More

In this section, we shall discuss the three types of dividend policies: Stable... Read More

How Financial Institutions Differ from ...

A financial institution is an intermediary between providers and recipients of capital or... Read More

The value of a CDS depends on the probability of default, i.e., the... Read More