Hypothesis Test Concerning the Equality of the Population Means

Analysts are often interested in establishing whether there exists a significant difference between the means of two different populations. For instance, they might want to know whether the average returns for two subsidiaries of a given company exhibit a significant variance. Such a test may then be used to make decisions regarding resource allocation or the rewarding of the directors. Before embarking on such an exercise, it is paramount to ensure that the samples taken are not only independent but also sourced from normally distributed populations. It can either be assumed that the population variances are equal or unequal. In this reading, we will assume that the population variances are equal.

Where \(s_p^2\) is pooled estimator of the common variance and is given by:

Also, the variables are defined as follows:

Example 1: Hypothesis Test Concerning the Equality of the Population Means

As is the norm, start by stating the hypothesis:

We assume that the two samples have equal variances, are independent, and distributed normally. Then, under H0,

Note that the sample variance is given by: 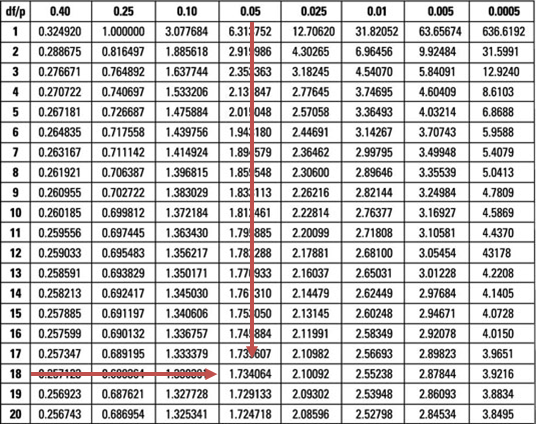 Therefore, we do not have sufficient evidence to reject the H0 at 5% significance. As such, it is reasonable to conclude that the special diet has the same effect on body weight as the placebo.

Note to candidates: You could choose to work with the p-value and determine P(t18 > 0.937) and then establish whether this probability is less than 0.05. Working out the problem this way would lead to the same conclusion as above.

Example 2: Hypothesis Test Concerning the Equality of the Population Means

Suppose we replace ‘>’ with ‘≠’ in H1 in the example above, would the decision rule change?

Replacing ‘>’ with ‘≠’ in H1 would change the test from a one-tailed one to a two-tailed test. We would compute the test statistic just as demonstrated above. However, we would have to divide the level of significance by two and compare the test statistic to both the lower and upper 2.5% points of the t18-distribution (±2.101). 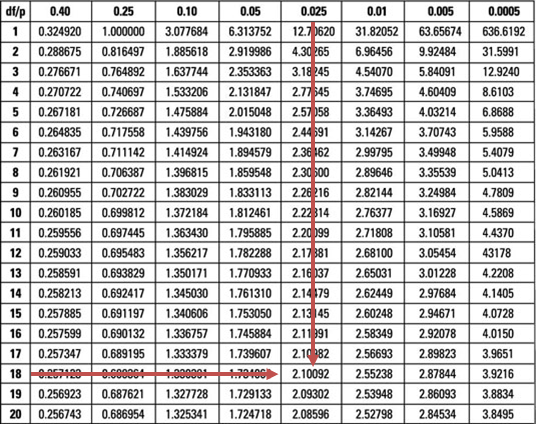 Since our test statistic lies within these limits (non-rejection region), the decision rule would, therefore, remain unchanged.

Significance of a Test in the Context of Multiple Tests

Calculating the t-statistic for Hypothesis Testing on Correlation

Probability Distribution of Discrete a ...

Coefficient of Determination and F-sta ...

The classic normal linear regression model assumptions are as follows: I. The relationship... Read More

Stating the Probability of an Event in ...

Odds for and against an event represent a ratio of the desired outcomes... Read More