We can categorize technical analysis indicators into three groups. These are:

A moving average refers to the closing price of a security averaged over a specified number of time periods. It is the mean of the last n closing prices. They are useful  since they smooth out price fluctuations occurring in the short term, hence giving analysts a clearer idea of the trend exhibited by  a market.

Some concepts related to moving averages are:

Bollinger bands are made up of a moving average middle band, an upper band, and a lower band. The upper and lower band are the moving average plus and less some standard deviations, respectively. This indicator can assist in determining a statistically appropriate trading range for the market. 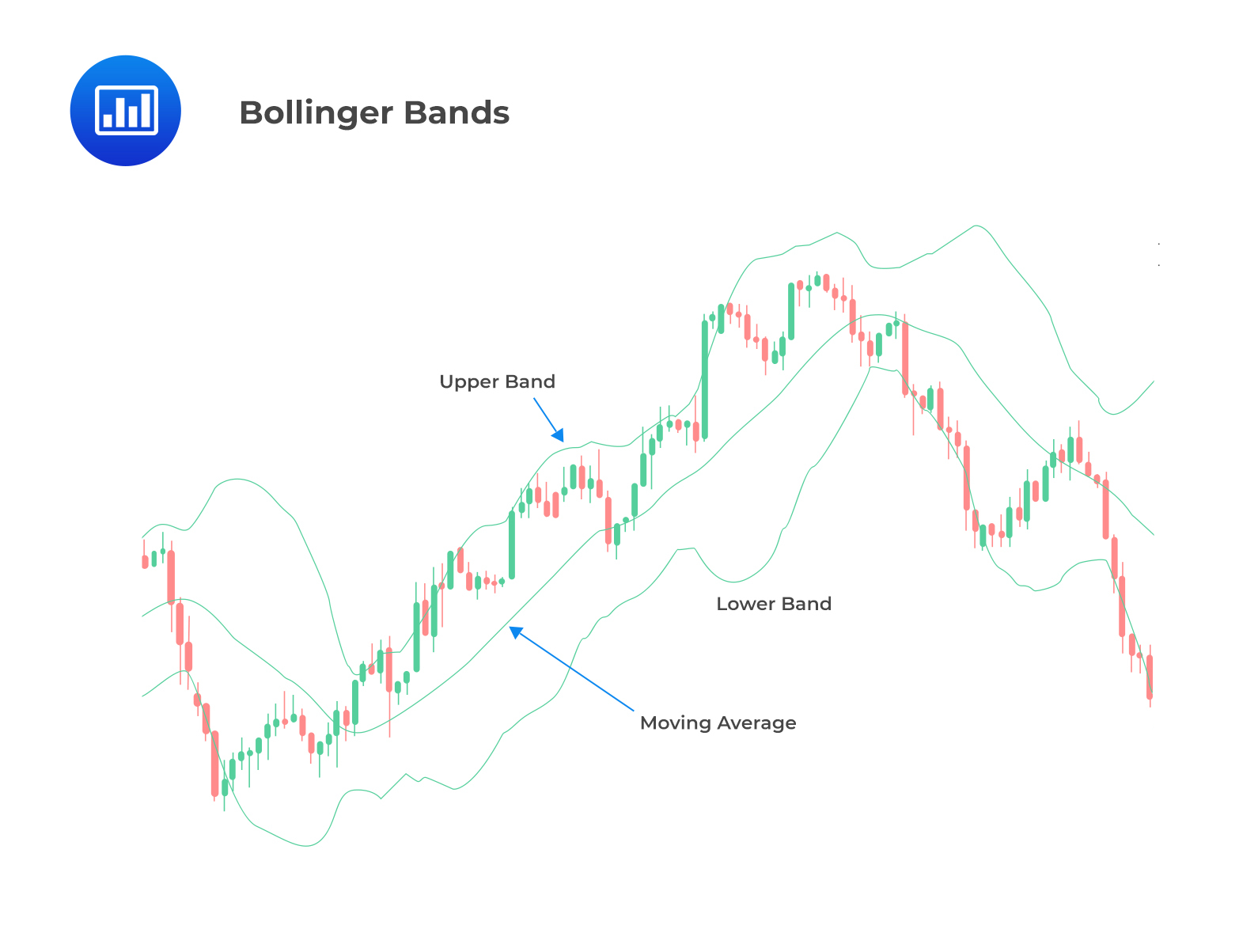 Prices above the higher line may indicate overbuying. Prices below the lower line may, on the other hand, indicate an oversold market. A strategy that yields optimum returns may entail buying when the price is at the lower band and selling when it’s at the higher band.

Bollinger Band width is a Bollinger Bands-derived indicator. It calculates the difference in percentage between the upper and lower bands.

Momentum oscillators, also called rate of change oscillators, are computed by taking the most recent closing price, subtracting the closing price recorded on a specified trading day in the past, and finally multiplying the result by a factor of 100:

Oscillators can be used to:

The stochastic oscillator is composed of two lines, called %K and %D, calculated as follows:

The moving-average convergence/divergence oscillator (commonly referred to as the MACD) is the difference between short-term (i.e., 12 days) and long-term moving averages (i.e., 26 days) of the security’s price. It is constructed by calculating two lines, the MACD line, and the signal line. MACD oscillates around zero and has no upper or lower limit. When the MACD is trending in the same direction as price, this pattern reflects convergence, and when the two are trending in opposite directions, the pattern reflects divergence.

The MACD can be used in technical analysis to:

The RSI measures both the speed and the rate of change in market price movements. The RSI oscillator’s values, which are usually monitored over a 14-day period, oscillate between zero and 100. When the Relative Strength Index falls below 30, it suggests oversold market conditions, and when it rises above 70, it shows overbought market conditions. It is calculated as follows:

Sentiment indicators comprise a range of periodic polls conducted with the aim of sampling the sentiments of individual investors or investment professionals about the equity market.

There are two types of sentiment indicators:

Which of the following is least likely a momentum oscillator?

B and C are incorrect. MACD and RSI are momentum oscillators and not price-based indicators.

Risk budgeting focuses on the implementation of the risk tolerance decisions approved by... Read More

Trend Trend is perhaps one of the most important concepts in technical analysis.... Read More

Components of the IPS

There is no standard format to the Investment Policy Statement, but most conform... Read More