Break-even and Shut-down Points of Production

The break-even point can be defined as the production and sales levels of a given product at which the revenue generated from the sales is perfectly equal to the production cost. At this point, the company does not make any profit or loss; it breaks even.

Fixed costs are those costs that remain the same regardless of the level of production of any company. A good example is the cost incurred in setting up production facilities, e.g., rent, fixed interest charges, and depreciation.

Variable costs are directly proportional to the volume produced, and examples include raw materials, wages paid, and other incurred expenses.

An increase in sales causes a direct increase in contribution. At the break-even point of sales, the contribution is strictly equal to the fixed cost. Therefore, companies will report losses below this point and profits above this point.

After identifying the types of production costs, it is now possible to calculate the break-even point of production because this is where you will either make a profit or a loss. 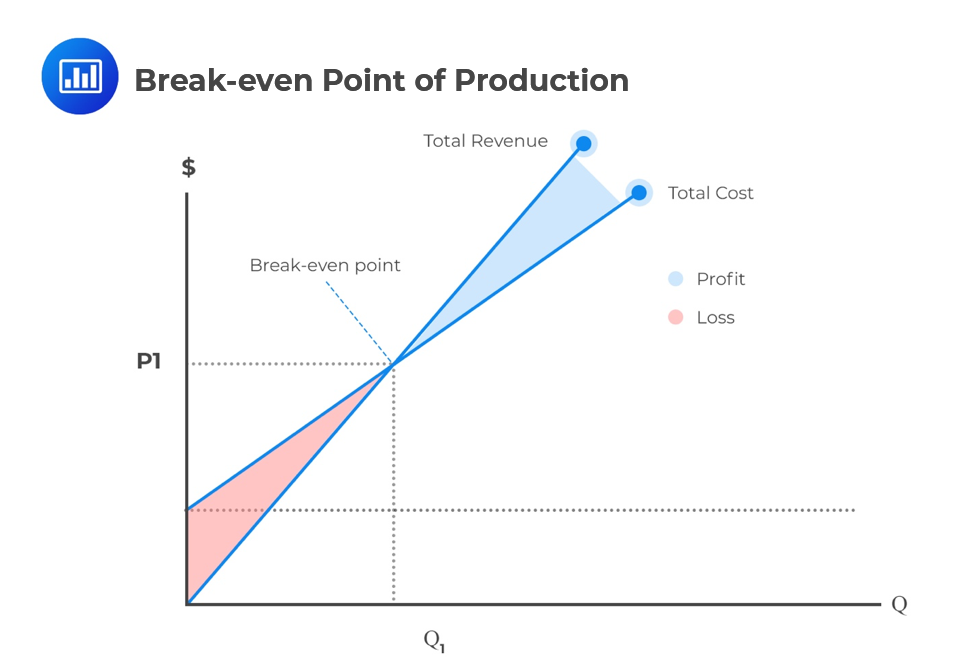 If we want to determine the number of units that can be produced and sold to break even, we can use the following formula:

\(P\)=Selling Price per unit of production

Note that the denominator of the above formula is the contribution margin per unit of production.

The total fixed cost of a manufacturing company is $300,000, and the variable cost per unit produced is $150. If the selling price of one unit is $300, calculate the break-even point of production.

this is the number of units that must be produced and sold to break even.

The variable cost per unit (written as marginal cost, MC, on the following graph) falls with an increase in the number of units produced up to a certain point. After this point, the variable cost rises.  Consequently, a U-shaped curve is realized when quantity is plotted on the x-axis against the average variable cost on the y-axis. 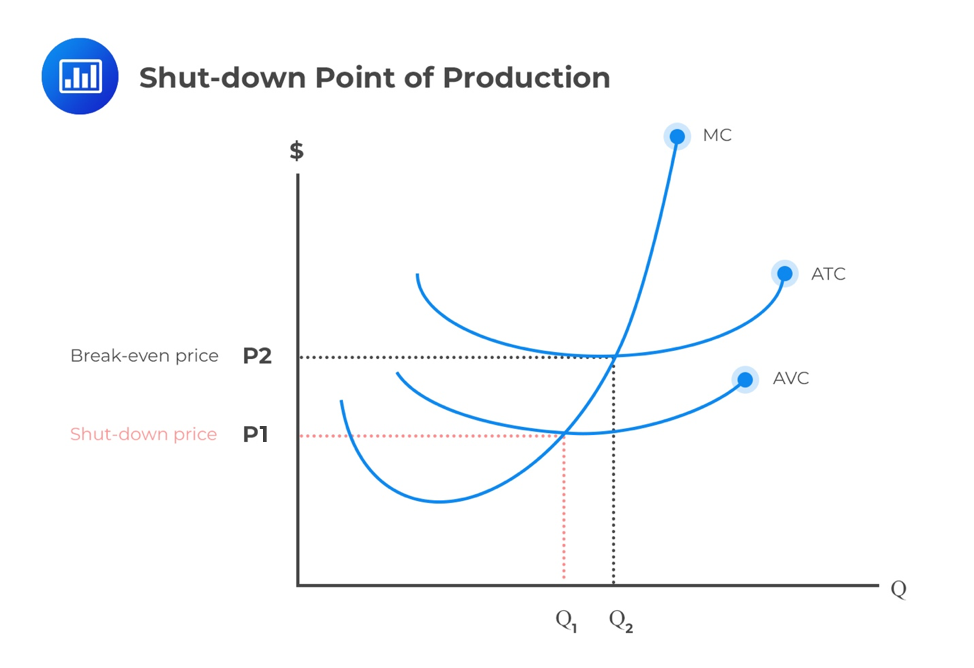 As seen previously, the break-even point is the point where the marginal cost (MC) equals the average total cost (AT C). The shut-down point of production, on the other hand, is the price at which the marginal cost equals average variable costs (AVC). At this point, the company is better off stopping its production than keeping producing at a loss.

If it continues its operations, it will earn a revenue of $5000, pay a variable cost of $3000 and use $2000 to pay the fixed cost. In this instance, the company will lose less by continuing its operations. However, the company will exit the market in the long run unless prices increase because eventually, the average variable costs exceed average revenue (AR). Thus it will shut down at the point of minimum average variable cost (AVC), as seen on the graph.

The short-term shut-down point of production for a firm operating under perfect competition will most likely occur when the price per unit is equal to:

Any firm will shut down its production when the marginal cost is less than average variable cost. We will see later that for a firm in perfect competition to maximize profit, marginal revenue must be equal to marginal cost.

Economies and Diseconomies of Scales

Saving and investing are often used interchangeably, but there is a difference between... Read More

Describe Pricing Strategy Under Each M ...

Pricing strategy can be described as the range of methods that the firms... Read More