Lending is undoubtedly one of the most profitable investment avenues for banks. Traditionally, banks take short-term deposits and pool them together to provide long-term loans. However, these loans introduce credit risk – the possibility that the funds disbursed may not be recovered following an event of default by the borrower. There are several ways used by banks to deal with credit risk exposure. Banks can

In this chapter, we will extensively look at various methods used by banks to transfer credit risk exposure.

The Role of Credit Derivatives in the 2007-2009 Financial Crisis

Risk transfer among banks began in earnest towards the end of the 20th century. Indeed, onetime Federal Reserve Chairman Allan Greenspan is on record admitting that credit derivatives and securitizations represent the main reason why the United States banking system emerged from the 2001-2002 economic slowdown largely unscathed. Some of the instruments that had been in use at the time included credit default swaps, collateralized debt obligations, and collateralized loan obligations.

However, in the aftermath of the 2007/2009 financial crisis, credit derivatives took a significant share of the blame. It has since emerged that the problem was not the instruments themselves but how they were used. While some of these instruments virtually disappeared from the market in the years following the crisis, others continued to thrive. In particular, the CDS and CLO markets remained robust and are still being used widely by banks to manage and transfer credit risk. The very complex instruments, such as collateralized debt obligations squared (CDOs-squared) and single-tranche CDOs, are unlikely to be revived. In recent years, new credit risk transfer mechanisms have also emerged.

Credit derivatives are financial instruments that transfer the credit risk of an underlying portfolio of securities from one party to another party without transferring the underlying portfolio. They are usually privately held, negotiable contracts between two parties. A credit derivative allows the creditor to transfer the risk of the debtor’s default to a third party.

Credit derivatives are over-the-counter instruments, meaning that they are non-standardized, and the Securities and Exchange Commission regulations do not bound their trading.

The main types of credit derivatives include:

In a CDS, one party makes payments to the other and receives in return the promise of compensation if a third party defaults.

Debt securities often have longer terms to maturity, sometimes as much as 30 years. Consequently, it is very difficult for the creditor to develop reliable credit risk estimates over such a long investment period. For this reason, credit default swaps have, over the years, become a popular risk management tool. As of June 2018, for example, a report by the office of the U.S. Comptroller of the Currency placed the size of the entire credit derivatives market at $4.2 trillion, of which credit default swaps accounted for $3.68 trillion (approx. 88%).

The value of a CDS rises and falls as opinions change about the likelihood of default. An actual event of default might never occur. A default event can be difficult to define when dealing with CDSs. Although bankruptcy is widely seen as the “de facto” default, there are companies that declare bankruptcy and yet proceed to pay all of their debts. Furthermore, events that fall short of default can also cause damage to the creditor. These events include late payments or payments made in a form different from what was promised. Trying to determine the exact extent of damage to the creditor when some of these events happen can be difficult to determine. CDSs are designed to protect creditors against such credit events.

Collateralized debt obligations (CDOs) are structured products created by banks to offload risk. The first step entails forming diversified portfolios of mortgages, corporate bonds, and various other assets. These portfolios are then sliced into different tranches that are sold to investor groups having different risk appetites.

The safest tranche is also known as the senior tranche. It offers the lowest interest rate, but it is the first to receive cash flows from the underlying asset portfolio. The middle tranche offers a slightly higher interest rate and ranks just below the senior tranche. Thus, it takes the second spot during cash flow distribution. The most junior tranche, also called the equity tranche, offers the highest interest rate but ranks last during cash flow distribution. It is also the first tranche to absorb any loss that may be incurred. The amount available for distribution to the equity (junior) tranche is whatever is left from the two other tranches, less the management fees. These fees can range from 0.5% to 1.5% annually.

Investors in these tranches can protect themselves from default by purchasing credit default swaps. The CDS guarantees a pre-specified compensation if a given tranche defaults. In turn, the investors must make regular payments to the credit protection seller (writer of the CDS).

Each tranche is assigned its credit rating, except the equity tranche. For instance, the senior tranche is constructed to receive an AAA rating. Highly rated tranches are sold to investors, but the junior ranking ones may end up being held by the issuing bank. That way, the bank has an incentive to monitor the underlying loans.

Let us assume there is a $100 million collateral portfolio that is composed of debt at 6%.  To pay for this collateral, the CDO is divided into three tranches:

For example, consider a bank with significant (but risky) assets in the form of loans in its books. Such a bank may want to reduce its economic exposure concerning some of its loans while still retaining a direct relationship with its customer base. Therefore, the bank can enter into a total return swap with a counterparty that desires to gain economic exposure to the loan market. What happens is that the bank (payer) pays the interest income and capital gains coming from its customer base to these investors. In return, the counterparty (receiver) pays a variable interest rate to the bank and also bears any losses incurred in the loan. 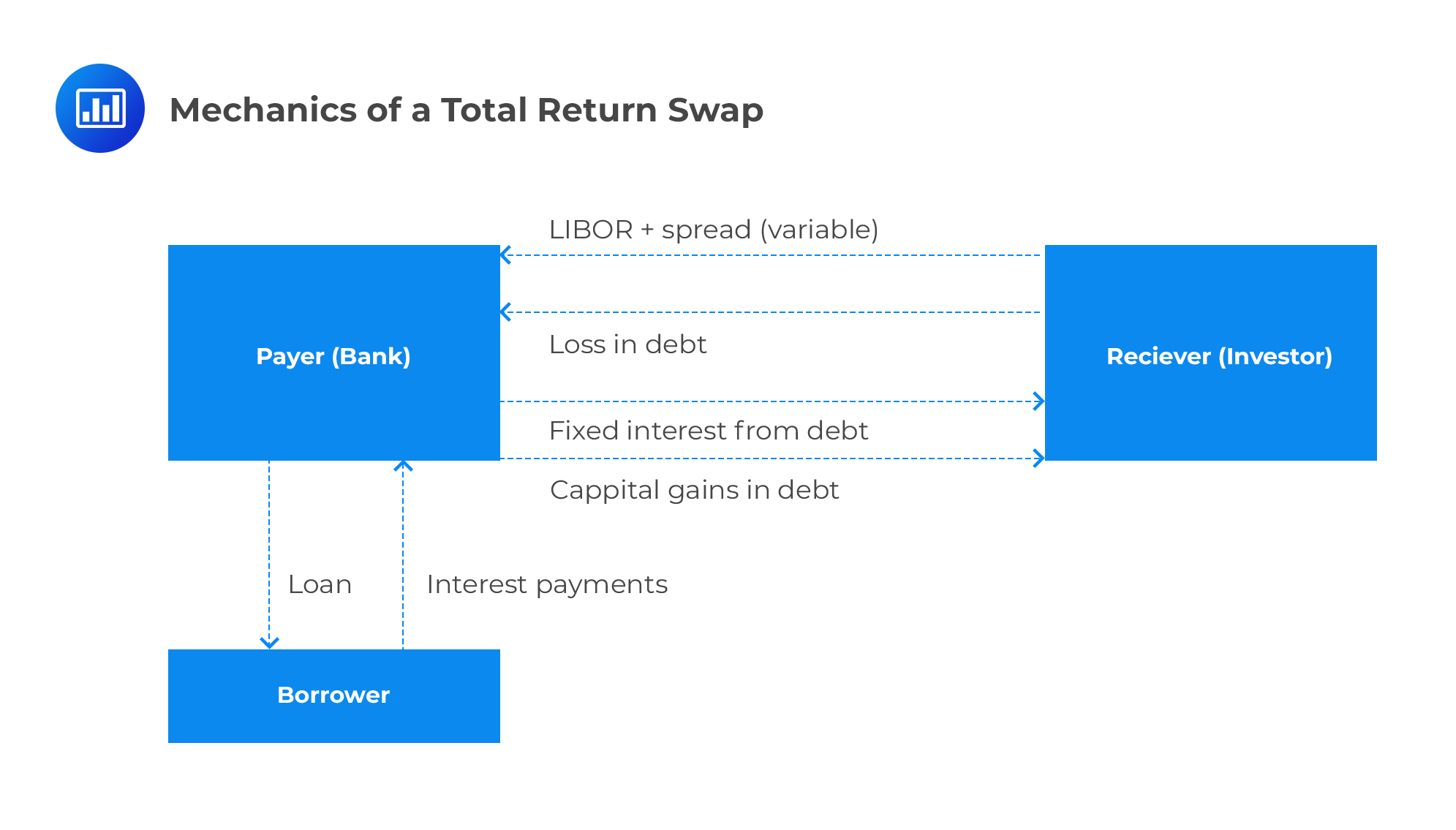 Traditional Approaches That Firms Can Use to Help Mitigate Credit Risk.

Banks use several ways to reduce their exposure to credit risk, both individually and on an aggregate basis. Such credit protection techniques include the following:

Credit Risk insurance is a critical risk-mitigation technique when protecting against a bad debt or slow payments that are not in line with the initial agreement. If the counterparty cannot pay due to a host of issues such as insolvency, political risk, and interest rate fluctuations, the credit insurer will pay. By the principle of subrogation, the insurer can then pursue the counterparty for payment. When insurance is sought on an individual obligor basis, this is termed guarantee.

Netting is the practice of offsetting the value of multiple positions or payments due to be exchanged between two or more parties. Netting entails looking at the difference between the asset and liability values for each counterparty involved, after which the party that is owed is determined. For netting to work, there must be documentation that allows exposures to be offset against each other.

This refers to the settlement of gains and losses on a contract daily. It avoids the accumulation of large losses over time, which can lead to a default by one of the parties. As with netting, an agreement has to be in place allowing counterparties to periodically revalue a position and transfer any net value change between them so that the net exposure is minimized

Termination describes a situation where parties develop trigger clauses in a contract that gives the counterparty the right to unwind the position using some predetermined methodology. Trigger events may include:

From the perspective of the originator, the OTD model has several benefits:

To borrowers, the OTD model leads to an expanded range of credit products and reduced as well as from borrowing costs.

The OTD model, however, has its disadvantages:

A direct result of the shift to the originate-to-distribute model is securitization, which involves repackaging loans and other assets into new securities that can then be sold in the securities markets. This eliminates a substantial amount of risk

(i.e., liquidity, interest rate, and credit risk) from the originating bank’s balance sheet when compared to the traditional originate-to-hold strategy. Apart from loans, various other assets, such as residential mortgages and credit card debt obligations, are often securitized.

To reduce the risk of holding a potentially undiversified portfolio of mortgage loans, several originators (financial institutions) work together to pool residential mortgage loans. The loans pooled together have similar characteristics. The pool is then sold to a separate entity, called a special purpose vehicle (SPV), in exchange for cash. An issuer will purchase those mortgage assets in the SPV and then use the SPV to issue mortgage-backed securities to investors. MBSs are backed by mortgage loans as collateral.

The simplest MBS structure, a mortgage pass-through, involves cash (interest, principal, and prepayments) ﬂowing from borrowers to investors with some short processing delay. Usually, the issuer of MBSs may enlist the services of a mortgage servicer whose main mandate is to manage the flow of cash from borrowers to investors in exchange for a fee. MBSs may also feature mortgage guarantors who charge a fee and, in return, guarantee investors the payment of interest and principal against borrower default.

What are the contractual specifications for the protection seller of a credit default swap?

B. If a credit event occurs, the protection seller is obliged to exchange contractually specified assets for government bonds

D. If the underlying of the credit default swap is a bond issued by a specific corporation, only this corporation can act as a protection seller

The correct answer is: A)

In a CDS, one party makes payments to the other and receives in return the promise of compensation if a third party defaults.

D is incorrect. The issuer of a bond cannot double up as the protection seller of the security issued.

After completing this reading, you should be able to: Explain the potential benefits... Read More

After completing this reading, you should be able to: From the perspective of... Read More

Modern Portfolio Theory (MPT) and the ...

After completing this reading, you should be able to: Explain modern portfolio theory... Read More