There are three growth theories based on the per capita growth in an economy:

The classical growth theory, developed by Thomas Malthus in 1798, bases its argument on resource depletion and the growing population. Moreover, the production function in this theory is simple, with labor as a variable factor and land being a fixed factor.

The classical model forecasts that technology adoption leads to a larger but not wealthier population in the long run. Therefore, the standard of living remains constant even with technological development and hence, no per capita output, making this theory a failure.

In the neoclassical growth theory, capital and labor are the varying factors affected by diminishing marginal productivity.

The Objective of Neoclassical Growth Rate

The neoclassical model evaluates the long-run growth rate of the per capita output concerning:

While discussing the neoclassical model, two states of growth rate are considered:

We analyze the neoclassical growth theory by considering the per capita Cobb-Douglas production functions:

The rates of change of capital per worker is given by:

and rate of change of output per worker is given by:

Deduced from the production function, the growth rate of output per worker can also be:

Also, let \(\delta\) be constant depreciation rate. Then, the change in physical capital stock is:

From Eq 3, the steady-state (equilibrium position) of the sustainable growth rate of per capita output is a constant dependent on the TFP growth rate (\(\theta\)) and the output elasticity relative to capital (\(\alpha\)).

The growth rate of the production per capita (steady-state rate of growth of labor productivity) is:

The growth rate of output:

At this point, we have reached a significant result of the neoclassical model. Note that \(\frac{\theta}{1-\alpha}\) is also a steady-state growth rate of labor productivity. The last formulas are in sync with the labor productivity accounting equation:

In an equilibrium position, the output-to-capital ratio is constant, and the capital to labor (\(k\)) ratio and labor productivity (\(y\)) grow at the same pace, evidenced by \(\left(\frac{\theta}{1-\alpha}\right)\). Moreover, the marginal product of capital \([\alpha\left(\frac{Y}{K}\right)]\) is constant and equal to the real interest rate in the market.

A developed country has a labor cost in total factor cost of 45%, a TFP growth rate of 3%, and a labor growth rate of 2%. Using the neoclassical model, the steady rate of growth for this country  is closest to:

From the neoclassical model, the steady growth rate is given by:

From the information given,

An alternative method of grasping the equilibrium position is rewriting Eq 4 to savings or investment equation as:

From the equation above, the steady-state rate of growth is reached where the actual gross investment per worker created in the economy and savings are just enough to:

Graphically, the steady-state rate of growth in the Neoclassical model is shown below. 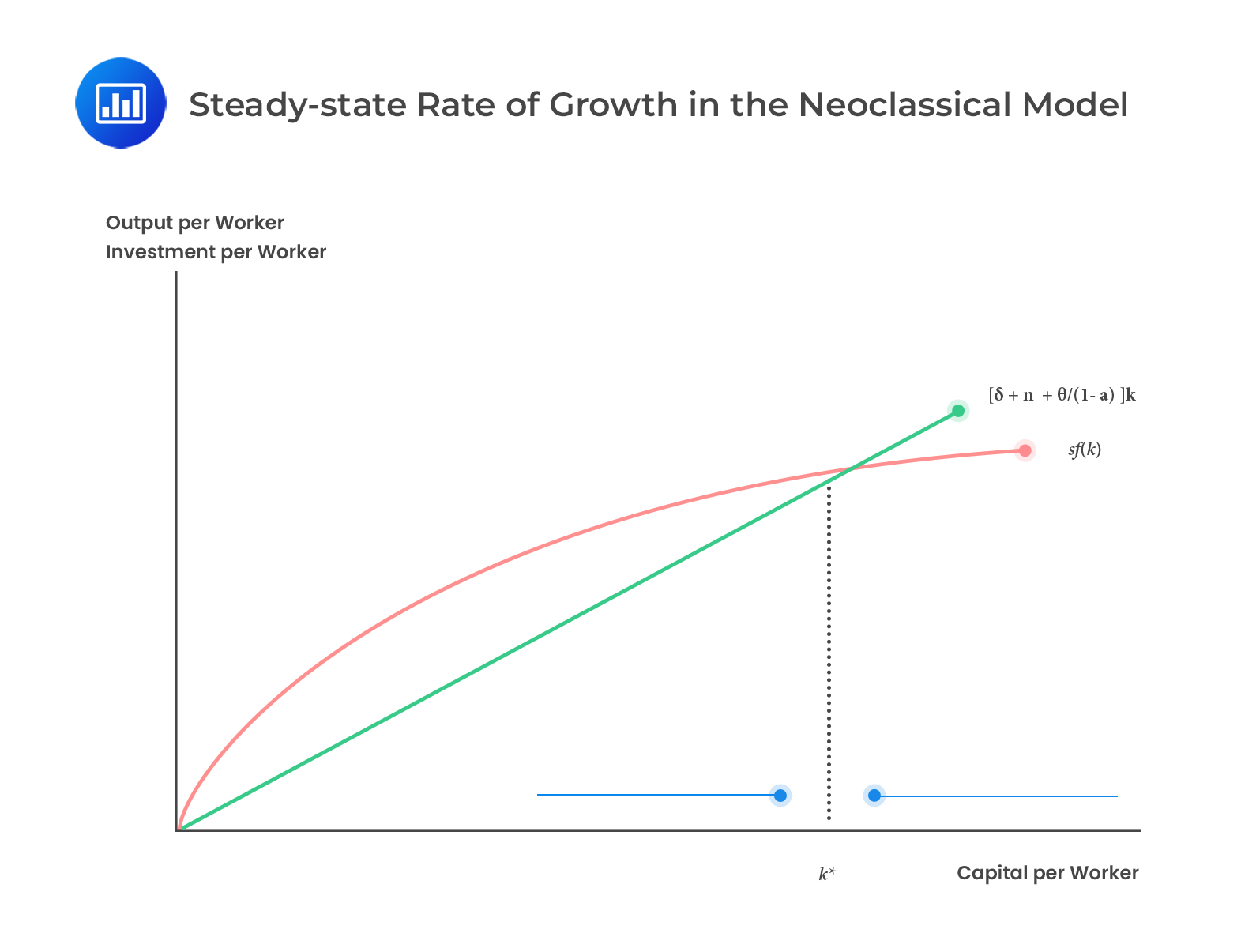 The straight line represents the amount of investment necessary for the required physical capital growth rate\(\left[\left[\left(\frac{\theta}{1-\alpha}\right)+\delta+n\right]k\right]\) with the gradient equal to \(\left[\left(\frac{\theta}{1-\alpha}\right)+\delta+n\right]\). The curved line (due to diminishing marginal returns) represents the actual investment \((sf(k))\) by each worker. It is determined by the rate of saving and the production function.

The point where the required and the actual investment lines intersect is called the steady-state or the equilibrium position.

A high saving rate leads to a higher capital to labor ratio (\(k\)) and labor productivity (\(y\)) due to more savings or investments at each level of output. 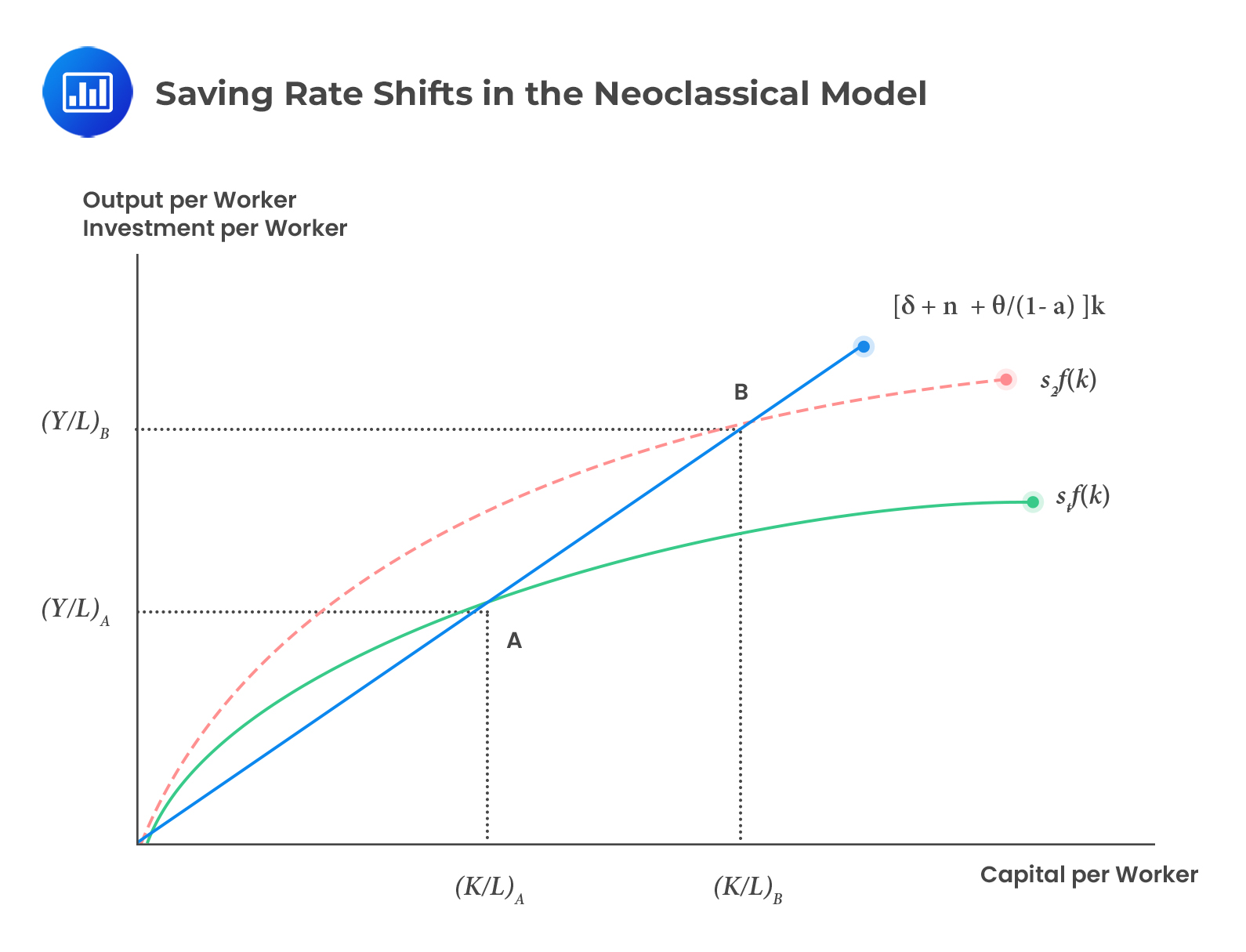 When the depreciation rate drops, the equilibrium capital to labor ratio and output per worker decreases since a given gross saving rate creates less capital accumulation. Graphically, it increases the slope of required investment and hence changes in the equilibrium position.

When there is a rise in the growth rate of TFP, the steady-state capital-to-labor ratio and output per worker is reduced for a provided size of labor and TFP. Graphically, the effect is the same as that of labor force growth.

Neoclassical Model When the Economy Has Not Achieved Equilibrium Position

An economy experiences a higher or slower growth relative to a steady-state when transitioning to stable growth alignment.

And growth to labor ratio as:

Graphically, the relationships in the neoclassical growth theory are shown below. 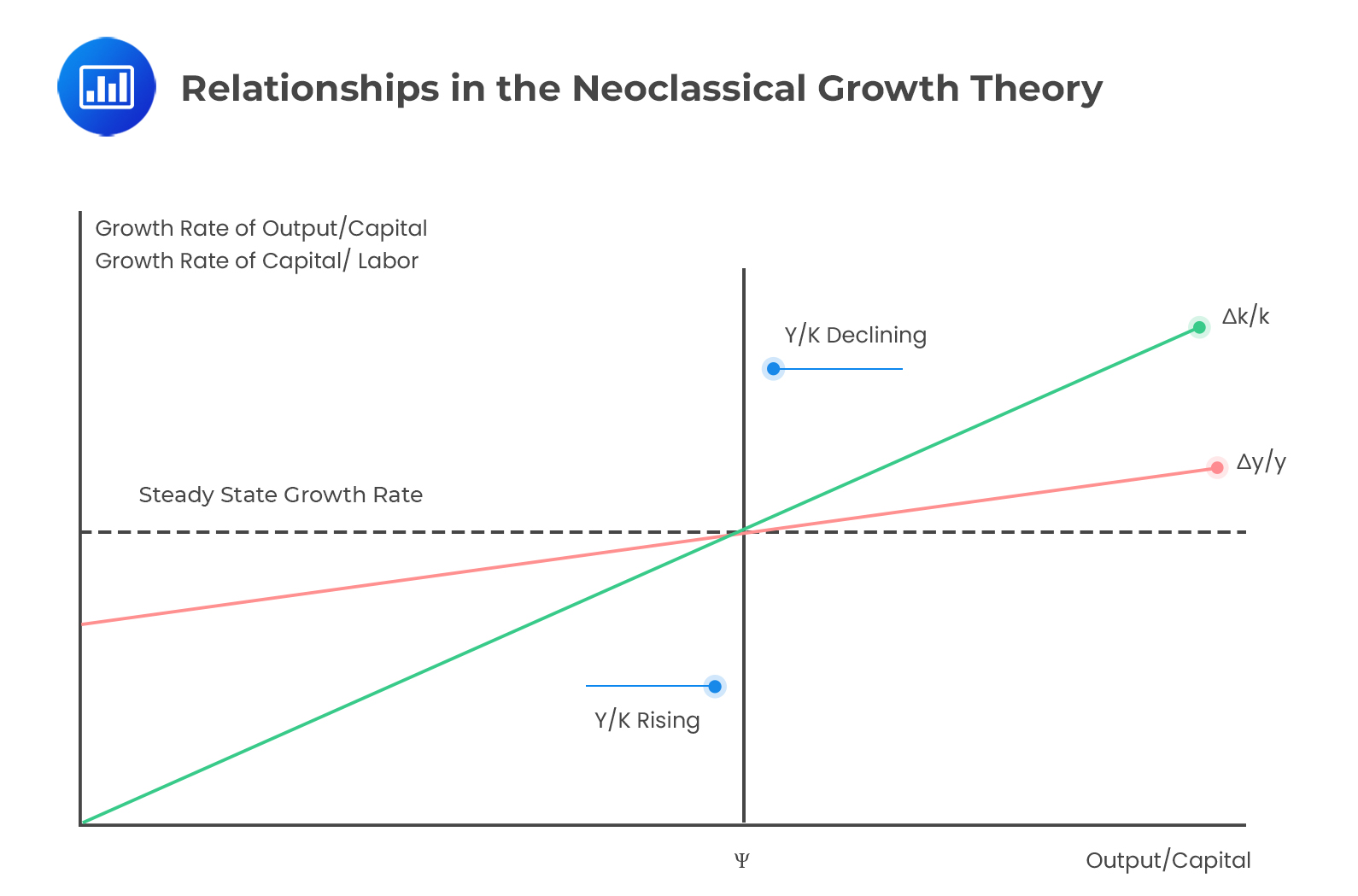 Conversely, if the output to capital ratio is below the state, the actual investment is insufficient to maintain the capital-to-labor ratio trend. Besides, the output per capita and capital to labor ratios grow more slowly.

Implications of the Neoclassical Model

In the long run, capital accumulation will affect economic growth but not the level of output. A growing economy will always move towards the attainment of a steady-state of growth. It is imperative to remember that the growth rate of output is not dependent on the accumulated capital.

For long-term sustainable economic growth to occur, an economy cannot rely on capital deepening investments alone. Diminishing marginal returns will occur when the increase of some inputs is not the same as other inputs. Without improvements of TFP per capita, output and the growth of labor productivity will reduce. Due to diminishing marginal returns to capital, only growth in technology will lead to the sustainable growth of potential GDP per capita.

4. Effects of savings on growth

In the short run, higher savings will lead to an increment in the growth rate of the economy. In fact, the growth will exceed the steady-state growth rate, but once the transition period is over, it will return to a balanced state. Higher levels of productivity are experienced during the transition period. Once the steady-state growth is reached, the economy no longer depends on the high savings rate.

The endogenous growth theory explains technological progress rather than taking it as an external (exogenous) factor. According to the model, self-sufficient economic growth results from the model’s outcome, and the economy does not converge to an equilibrium position of the growth rate. Contrary to what is the case in the neoclassical model, there is no diminishing marginal capital for the whole economy. Therefore, a permanent increase in the saving rate increases economic growth.

\( y_e \) = Output per worker (proportional to capital per worker).

\(c\) = Constant marginal product of capital in the whole economy.

Note that the right-hand side of the above equation is a constant, implying that it applies to both the long-run and the short-run growth rates. Moreover, an increased saving rate (\(s\)) results in a permanent high growth rate. The equation above is the result of the endogenous growth theory.

An economy has a per capita income constant growth rate of 4%, a saving rate of 20%, an output-to-capital ratio of 0.65, depreciation of 10%, and a labor force growth rate of 1.5%. The saving rate increases by 4.5%. According to endogenous growth theory, the new steady growth rate is closest to:

From the information given in the question,

Output-to-capital ratio (which is constant for endogenous growth theory), \(c\) = 0.65.

Under the endogenous growth theory, the new growth rate of the per capita income is given by:

A currency swap is an agreement between two counterparties to exchange future interest... Read More

The market value of any asset is the sum of the present value... Read More

A coupon-paying bond’s pricing and valuation are the same as those of a... Read More