A statistic, on the contrary, is a measure that describes a characteristic of a sample. This could be the average value or the sample standard deviation of the sampled items. Researchers use sample statistics to estimate the unknown population parameters. For example, we often estimate the actual population mean using the sample mean.

Analysts use the sample mean to estimate the actual population mean.

The following are the annual returns realized from a given asset between 2005 and 2015.

A commonly-cited demerit of the arithmetic mean is that it’s not resistant to the effects of extreme observations or what we call ‘outsider values.’ For instance, consider the following data set:

The arithmetic mean is 9.4, which is greater than most of the values. This is due to the last extreme observation, i.e., 34.

Properties of the Arithmetic Mean

The weighted mean takes the weight of every observation into account. It recognizes that different observations may have disproportionate effects on the arithmetic mean. Thus:

A portfolio consists of 30% ordinary shares, 25% T-bills, and 45% preference shares with returns of 7%, 4%, and 6%, respectively. The portfolio return is closest to:

The return of any portfolio is always the weighted average of the returns of individual assets. Thus:

The geometric mean is a measure of central tendency, mainly used to measure growth rates. We define it as the nth root of the product of n observations:

The formula above only works when we have non-negative values. To solve this problem, especially when dealing with percentage returns, we add 1 to every value and then subtract 1 from the final result.

An ordinary share from a certain company registered the following rates of return over a 6-year period:

The compound annual rate of return for the period is closest to:

Important Points Related to the Geometric Mean and the Arithmetic Mean

The relationship between the arithmetic mean and geometric mean is given by:

The above equation shows that the larger the variance of the sample, the wider the difference between the geometric mean and the arithmetic mean.

Analysts use the harmonic mean to determine the average growth rates of economies or assets. If we have \(N\) observations:

The following are the annual returns on a given asset realized between 2005 and 2015.

The median is closest to:

First, we arrange the returns in ascending order:

Since the number of observations is even, the median return will be the middle point of the two middle values: 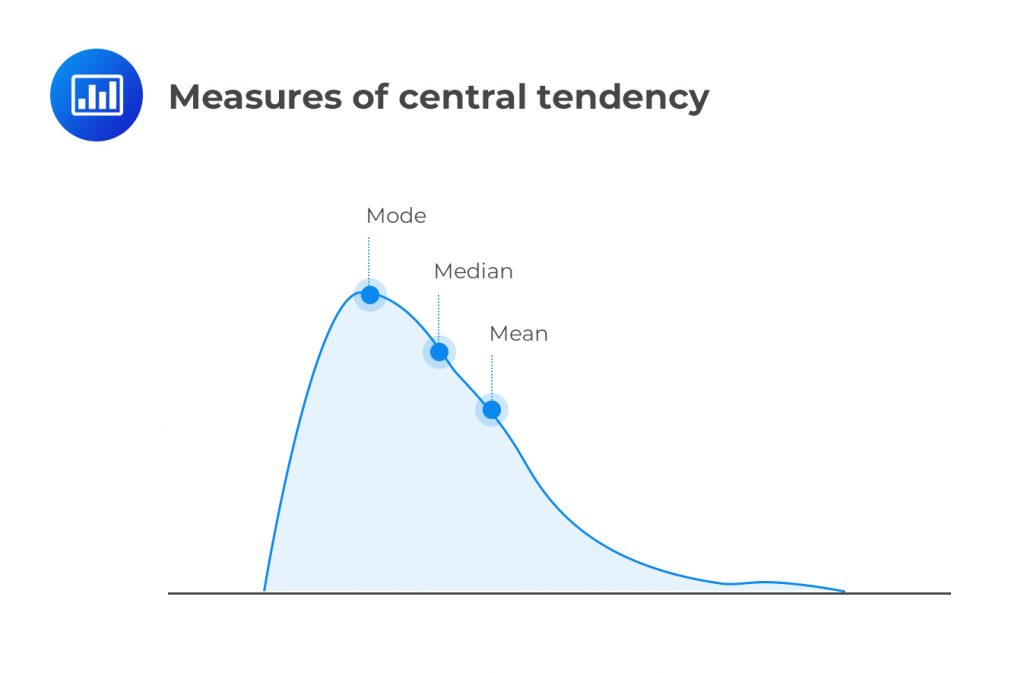 Limitations of the Median

The mode is the value that occurs most frequently in a data set. On a histogram, it is the highest bar. A data set may have a mode or none, e.g., the returns in the example above. One of its major merits is that it can be determined from incomplete data, provided we know the observations with the highest frequency.

Determine the mode from the following data set:

The mode is 20%. It occurs 4 times, a frequency higher than that of any other value in the data set.

Inter-market analysis is a method of determining the strength or weakness of an... Read More