A conversation on risk would be incomplete without a mention of the ability to measure the risk. Organizations need to evaluate the cost-benefit implications of modifying their risk profiles even as they remain within the governing body risk tolerance levels.

The most basic quantitative measure or metric associated with risk is probability. Probability is a measure of the relative frequency of a particular outcome. It is incorporated into other measures of risk to provide meaningful information. Commonly used risk metrics are as follows:

Standard deviation is a measure of volatility and provides a range of potential outcomes. It has limitations as a measure for financial markets since it presumes a normal distribution of returns. This is inappropriate when we look at empirical data from the last few decades.

Beta is a measure of the sensitivity of a security’s returns to the overall market portfolio. It provides an indication of systematic risk and is particularly appropriate for equity portfolios.

Commonly referred to as the “Greeks”, these metrics are appropriate for measuring the risk associated with derivative positions.

As an example, a Vega of 6 indicates that for a 1% increase in volatility, the option’s price will increase by 0.06. For a given exercise price, risk-free rate, and maturity, the Vega of a call equals the Vega of a put.

Rho measures the expected change in an option’s price per 1% change in interest rates. It tells us how much the price of an option should fall or rise in response to an increase or decrease in the risk-free rate of interest.

Duration is a measure of sensitivity to interest rates used for fixed-income instruments. We will see how to compute duration in the Fixed Income chapter.

VaR can be defined as the maximum amount of loss that can be incurred with a given confidence interval (under normal business conditions). It can also be viewed as the worst possible loss under normal conditions over a specified period. Suppose an analyst calculates the monthly VaR as $100 million at 95% confidence: what does this imply?

This simply means that under normal conditions, in 95% of the months, we expect the fund to make a profit or loss of no more than $100 million. Put differently, the probability of losing $100 million or more in any given month is 5%.

The expected shortfall (ES), also known as the conditional VaR (CVAR), is the average of losses defined by the probability. In other words, it is the expected loss given that the portfolio return already lies below the pre-specified worst-case quantile return (e.g. 5th  percentile).

Condiser this: the 5% VaR for a fund is -25%. Therefore, 5% of the time, the fund earns a return that’s less than -25%. The expected shortfall gives as the expected value of all returns falling at or below the 5 percentile return. As such, ES is a larger loss than the VaR. However, unlike the VaR, ES satisfies the subadditivity property. 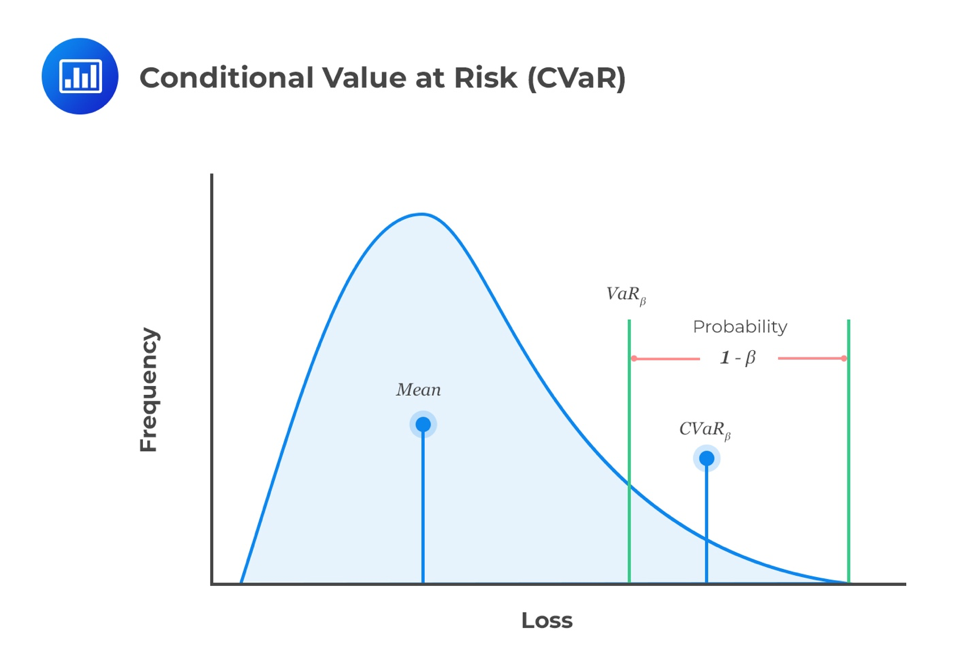 The ES is considered a better risk measure than VaR because unlike VaR, ES gives an estimate of the magnitude of a loss for unfavorable events.

In order to complement VaR measures, scenario analysis and stress testing are undertaken to try and understand the expected loss under different market stress conditions. One of the approaches that have been used to incorporate stress tests in VaR models involves trying to assess whether the stress test loss is part of the loss distribution developed in the VaR estimation. This way, a hypothetical/historical stress scenario can be associated with a given probability.

Credit risk, which pertains to fixed-income securities, relies on a combination of credit ratings provided by credit rating agencies as well as measures of liquidity, solvency, profitability, and leverage. Credit Default Swaps (CDS) also provide information on the potential risk of default.

Operational risk stems from internal functions or processes, systems, infrastructural flaws, human factors, and outside events. Operational risks are particularly hard to quantify but can be costly should they occur.

Risk modification is not necessarily about risk reduction. It may be about deflection of risk towards the desired risk target or exposure. There are four main categories of risk modification:

It is difficult to completely avoid risk. The decision to avoid a specific risk altogether will be made at a board level. It is here where it will be determined that some business activities are not worth pursuing based on the risk-return tradeoff.

Risk prevention and avoidance is part of the decision on how much risk to accept and it encompasses a trade-off between the cost and the benefit.

In many cases, it makes sense to be exposed to a particular risk. Even then, an individual or organisation should do so in an efficient way. Individuals or companies may, for instance, choose to self-insure. This may mean simply bearing the risk or setting aside some provision to cover losses should they occur.

Another form of efficiently accepting risk is through the use of diversification.

Risk transfer is the process of passing risk from one party to another and may take the form of an insurance policy. The insurer charges a premium in return for insuring a specific event. The insurer pools risks by selling a large number of diversified insurance contracts with uncorrelated risks.

Risk shifting refers to changing of the distribution of risk outcomes rather than passing the risk to another party. Risk shifting is often carried out through hedging by using financial market derivatives. Derivatives are either forward commitments or contingent claims.

Forward commitments are agreements that create a future-based transaction obligation between two parties at an agreed price or rate. These include forward contracts, futures contracts, and swaps.

Contingent claims arise in scenarios where both parties are mutually obligated to each other. Options grant the rights but not the obligation to transact. Consequently, the buyer of the option pays a premium at the start of the contract.

Choosing the risk mitigation method to use is a critical part of the risk management process. No single option may have an advantage and a cost-benefit tradeoff that may be required. Low-cost precautions against risks with few benefits should always be the first step.

Organizations with strong cash-flow may choose to self-insure as it tends to be the cheapest and most flexible option. Such an arrangement must, however, form part of the governance decision-making and risk tolerance process.

Finally, the cost of the modification method must be balanced against the potential benefits while producing an overall risk profile that is consistent with the risk tolerance and objectives of the organization.

Which risk metrics are often used within a fixed income portfolio?

A. Beta, delta, and standard deviation

B. Credit rating, CDS, and duration

A return generating model is one that can provide investors with an estimate... Read More

When we combine a risky asset portfolio with a risk-free asset, we form... Read More

Technical analysis indicators are measures used to predict changes in the price of... Read More

Inter-market analysis refers to a method of determining the strength or weakness of... Read More