The modified duration measures the effect on a bond’s percentage price change given a change in the yield-to-maturity. A secondary effect is measured by the convexity statistic.

The true relationship between the bond price and the yield-to-maturity (YTM) is a curved (convex) line. The duration (in particular, money duration) estimates the change in bond price along with the straight line that is tangent to the curved line. For small yield-to-maturity changes, there is little difference between the lines but as the change in YTM grows larger, the difference becomes significant. 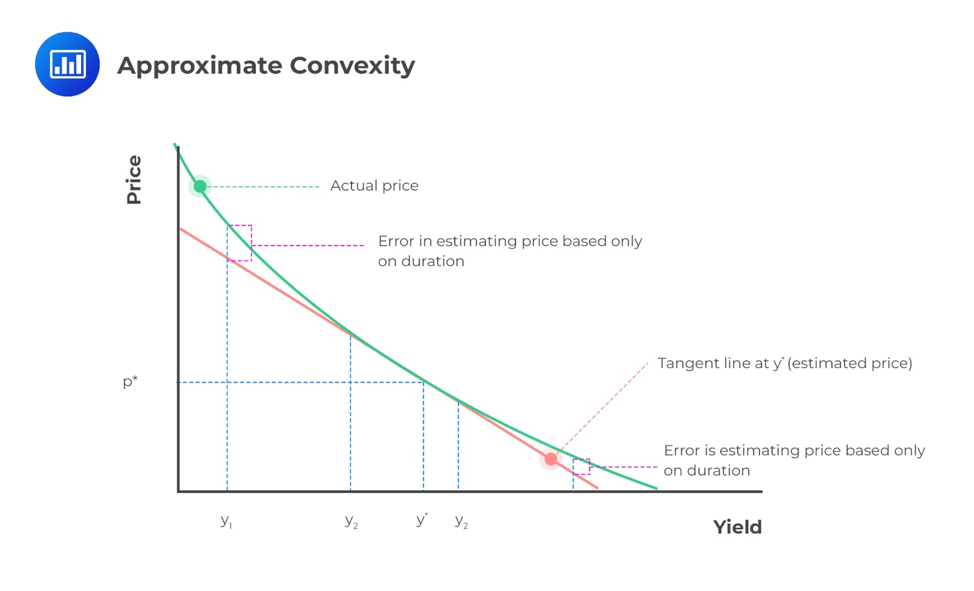 A convexity measure is used to improve the estimate of the percentage price change.

The second bracketed expression is the convexity adjustment:

The convexity adjustment is the annual convexity statistic, AnnConvexity, times one-half, multiplied by the change in the yield-to-maturity squared. This amount adds to the linear estimate provided by the duration alone, which brings the adjusted estimate very close to the actual price on the curved line. The sign “≈” is used because the resulting adjusted price is just an estimate.

ΔCurve = Change in yield on the benchmark curve

Here are a few quick facts about bonds with embedded options:

For a zero-coupon bond, the exact convexity statistic in terms of periods is given by:

N = number of periods to maturity as of the beginning of the current period;

t/T = the fraction of the period that has gone by; and

r = the yield-to-maturity per period.

A bond has a convexity of 120. What is the convexity effect if there is a sudden interest rate change of 50 basis points?

The bonds created from the securitization of mortgages are called residential mortgage-backed securities (RMBS)....