Demand and Supply of Money

Like any other market, demand and supply of money will interact to produce an equilibrium price of money.

The graph below shows the supply and demand for money. 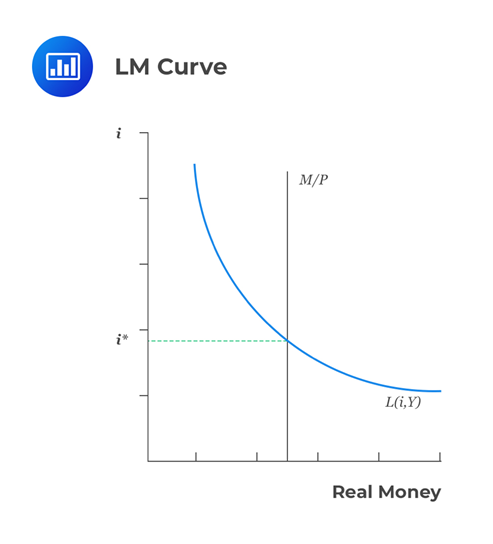 The money supply (MS – M/P) is vertical since it is assumed that there is a constant amount of money at any given time. On the other hand, the money demand (MD – L(i,Y)) curve is downward sloping since an increase in the interest rate makes the speculative demand for money to fall.

The Demand for Money

The Quantity Theory of Money

\(V\) is the velocity of circulation of money in the economy;

Thus, the amount of money used to purchase goods and services in an economy, M × V, is equal to the money value of this output, P × Y. However, if the velocity is constant, then the spending, P × Y, is relatively proportional to M. The quantity equation can also explain the consequence of money neutrality.

In most cases, if there is money neutrality, then the increase in money supply, M, will not affect the real output, Y, or the velocity of money, V. Since there is no effect of real output, there will be no need to exchange money rapidly. However, it causes the aggregate price to rise.

The quantity theory of money gave birth to the principle that price levels and inflation rates can be controlled by the growth rate of the money supply. As a result, the quantity of money in circulation depends on the level of economic activity.

The transactions motive most likely refers to the desire to hold money:

A. as a buffer against unseen events.

B. to purchase goods and services.

C. based on the opportunity or risk available on other financial instruments.

Money held for transactions motive is used to purchase goods and services.

A is incorrect. A buffer against unseen events, is a precautionary motive for holding money.

C is incorrect. The risk available on other financial instruments, refers to the speculative motive.

Substitution Effect A substitute is a good that satisfies the same need as... Read More

The balance of payments is a combined account of receipts and payments to... Read More

The Construction of Indices Used to Me ...

Since inflation is impactful on the general price level of an economy, it... Read More

The central bank of any nation worldwide has the main responsibility of managing... Read More