Methods of Data Visualizatons and their Uses

A histogram is a graphical representation of the data contained in the frequency distribution. It is a bar chart of data that groups data into intervals. The intervals should capture all the data points and also be non-overlapping. It is constructed by plotting the intervals on the horizontal axis and the absolute frequencies on the vertical axis.

For a histogram with equal size intervals, a rectangle should be erected over the interval, with its height being proportional to the absolute frequency. If intervals are unequal in size, the erected rectangle has an area proportional to the absolute frequency of that particular interval. In such a case, we would have the vertical axis labeled as ‘density’ instead of frequency. There should be no space between bars to indicate that the intervals are continuous. 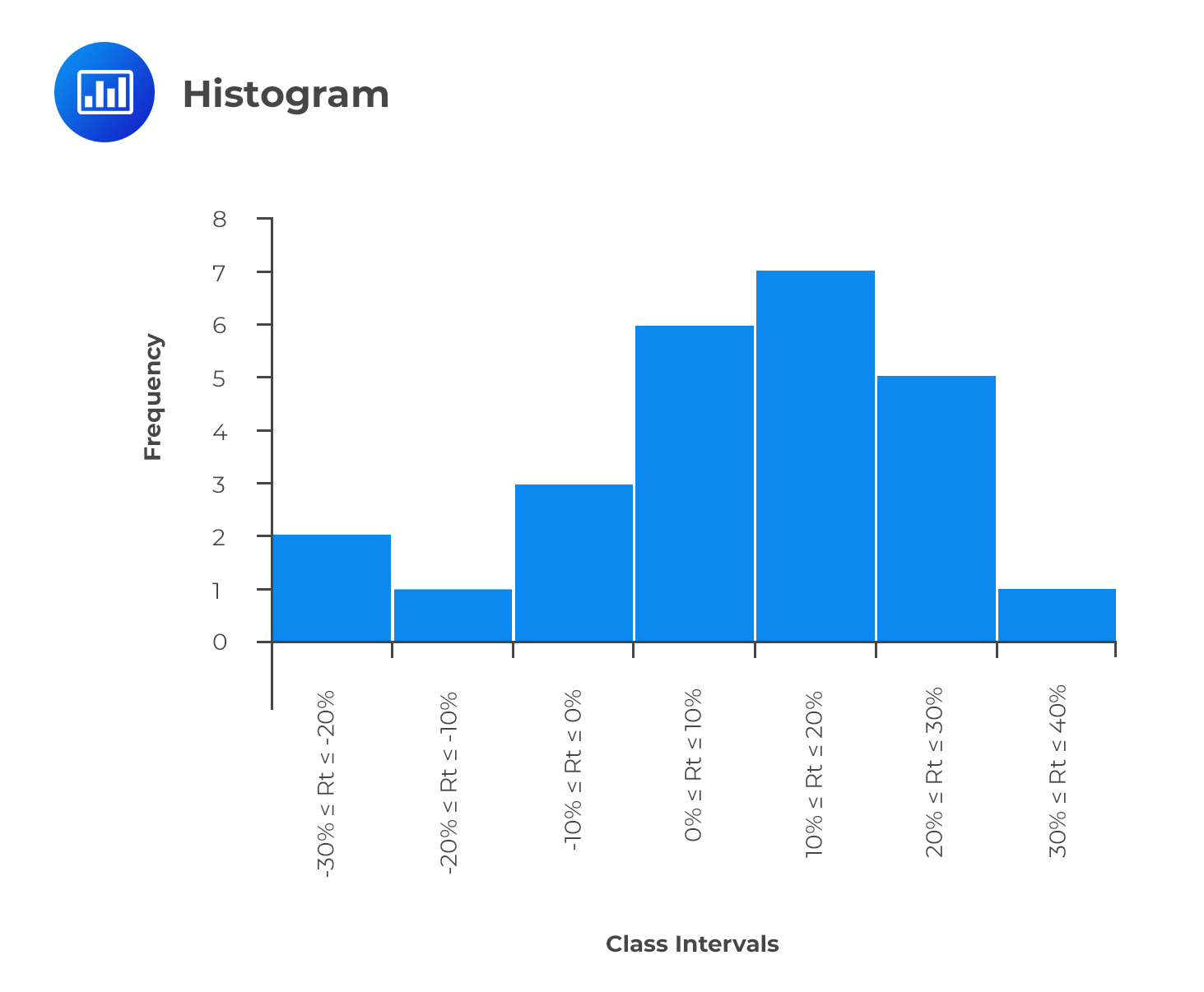 The vertical axis features the absolute frequencies which are then joined using straight lines and markers.

Going back to the stock return data, we could come up with a frequency polygon. 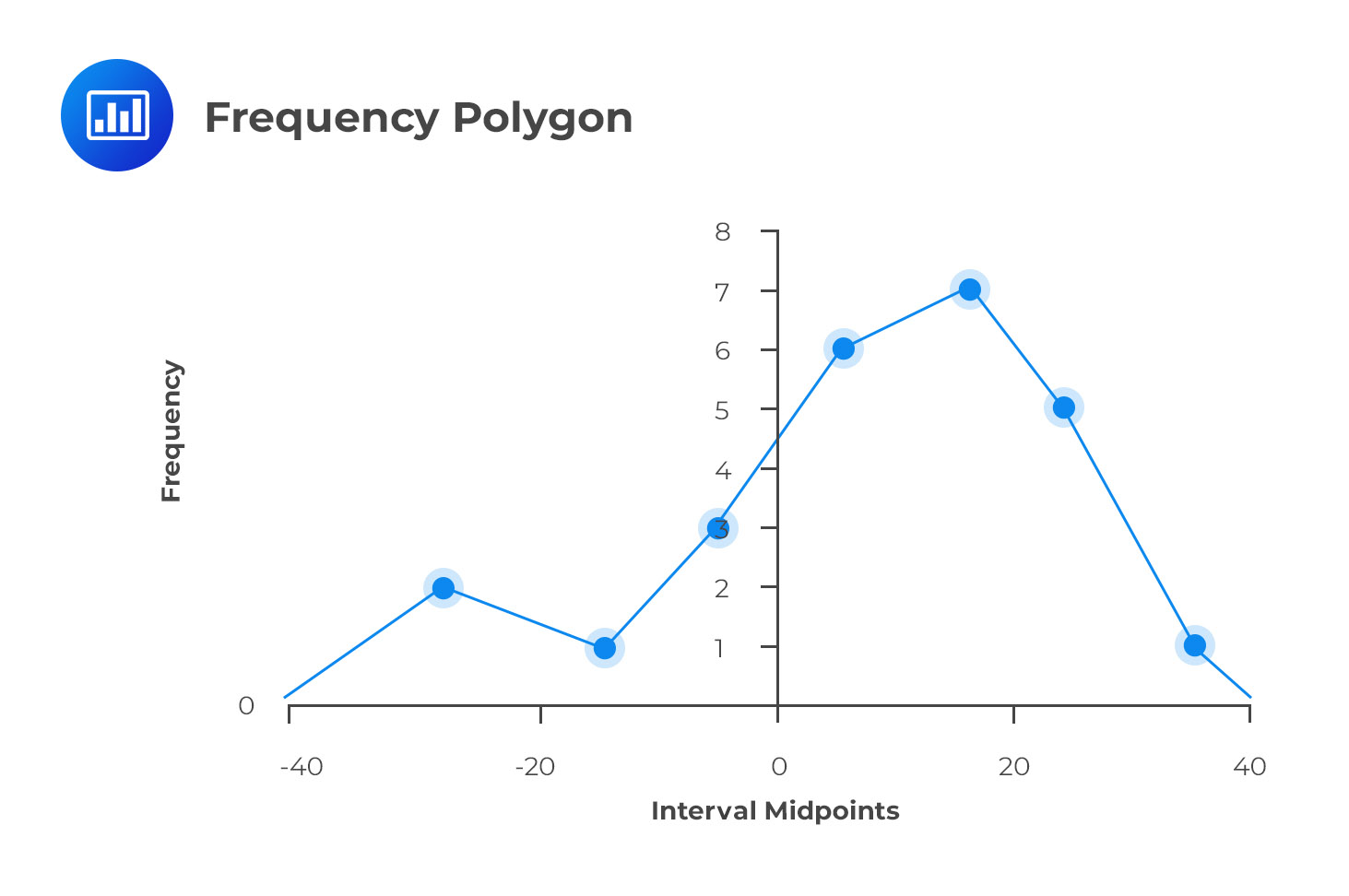 The frequency polygon is important because it shows the shape of a distribution of data. It can also be very useful when comparing two sets of data side-by-side. Note that the endpoints touch the X-axis. The vertical scale can also be positioned at the left margin. 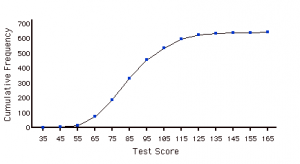 Bar chart is used to plot the frequency distribution of categorical data. In a bar chart, each bar represents a distinct category, while the height of a bar is proportional to the frequency of the corresponding category. Bar charts can be vertical or horizontal.

A bar chart where the categories are ordered by frequency in descending order and a line displaying cumulative relative frequency is known as a Pareto Chart. This chart is used to highlight dominant categories or the most important groups. 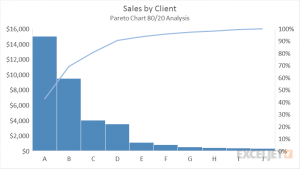 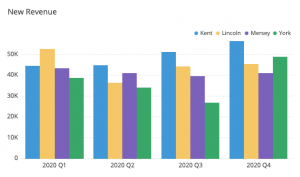 Stack bar chart is also used to present the joint frequency distribution of two cat­egorical variables. In a vertical stacked bar chart, the bars representing the sub-groups are placed on top of each other to form a single bar. Each subsection of the bar is shown in a different color to represent the contribution of each sub-group, and the overall height of the stacked bar represents the marginal frequency for the category. 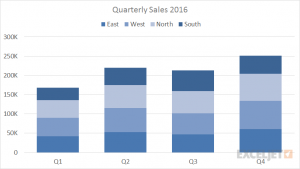 A treemap chart displays hierarchical data. A rectangular shape represents each item on a treemap, where smaller rectangles represent the sub-groups. The color and size of rectangles are typically correlated with the tree structure. The area of each rectangle is proportional to the value of the corresponding group.

The treemap shown below depicts the revenue of different companies in the food sector. We can observe that ABC Company has the highest revenue in the sector, represented by the rectangle with the largest area. 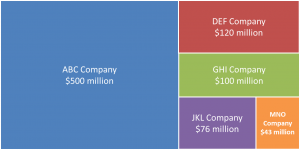 Additional dimensions can be added by displaying a set of nested rectangles – as shown below. 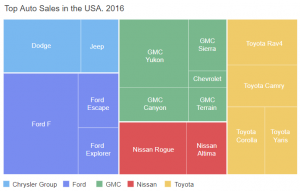 Word Clouds (also known as a tag clouds) are a visual representation of textual data. The size of each specific word is proportional to the frequency of words within a given body of text. We can use a different color to convey different sentiments. For example, profit can be displayed using green color while loss can be displayed using red color.  Word cloud is generally used to display unstructured data. 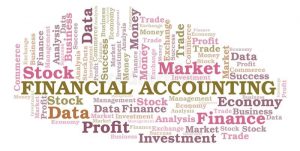 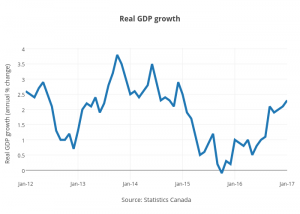 A line chart can be drawn using more than one set of data points, which can be used for making comparisons. 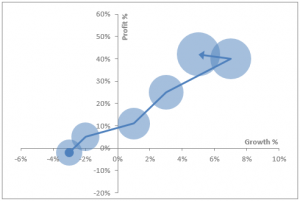 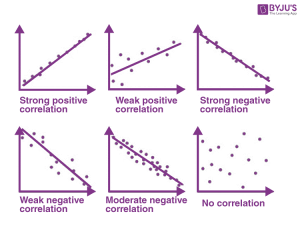 As shown above, a positive (negative) slope for the line of data points indicates a positive (negative) relation between the two variables. The strength of the relationship between variables can be determined based on how closely the data points are clustered around the line. Tight (loose) clustering indicates a potentially stronger (weaker) relationship. Further, data points located toward the ends of each axis represent the maximum or minimum values (i.e., outliers).

A scatter plot matrix is a grid of scatter plots used to visualize bivariate relationships between combinations of variables. 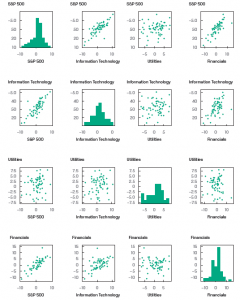 A heatmap is a graphical representation of data that uses a system of color-coding to represent different values. More intense color is displayed as the marks “heat up” due to their higher values or density of records. Heatmap can be used to display frequency distributions and visualize the degree of correlation among different variables. 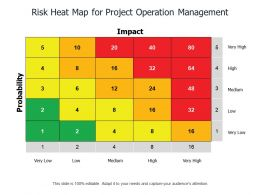 Which of the following most likely represents the graph which is drawn by connecting successive mid-points in a histogram by straight lines:

C is correct. When successive mid-points in a histogram are connected by straight lines, the graph is called a frequency polygon.

Reading 2 LOS 2e: Describe ways that data may be visualized and evaluate the uses of specific visualizations.

Expected Value The expected value of a random variable is the average of... Read More

The continuous uniform distribution is such that the random variable X takes values... Read More

Properties of an Estimator